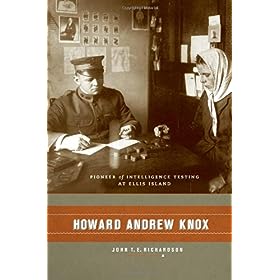 When many people think of immigrants disembarking at Ellis Island a century ago, they imagine swarms of recent arrivals being examined for infectious diseases and many being quarantined or turned away because they were deemed a threat to public health. But in Howard Andrew Knox: Pioneer of Intelligence Testing at Ellis Island, the British scholar John T.E. Richardson brings to light the history of a very different kind of exams – those that screened immigrants for mental deficiency.

Richardson highlights the significant role Knox played in devising methods of screening immigrants for mental deficiencies during Knox’s brief four years as an inspecting physician at Ellis Island, from 1912 to 1916. Knox and his colleagues were charged with assessing immigrants’ mental capacities, because federal law then mandated that anyone deemed to be an “idiot,” an “imbecile” or “feeble-minded” be denied admittance to the country on the grounds that they would pose a burden to the state.

Under significant public pressure to carefully cull the arriving groups for those deemed mentally deficient, Knox, with help from colleagues, devised a battery of pioneering “performance tests.” They were the first to attempt to measure intelligence in a “culture-free” way — one that would not penalize test-takers whose first language wasn’t English or who had grown up with skills and cultural knowledge very different from those one would acquire living in the United States.

As Richardson shows, Knox’s contributions to intelligence testing ultimately reached far beyond the immigration center in New York Harbor to influence towering figures in the field. Richardson discusses the eugenics movement that flourished during this period and, most significantly, provides a comprehensive history of intelligence testing in the first half of the 20th century.

The result is an exhaustively researched book that will surely appeal to historians of intelligence testing and historians of science, as well as professionals with a particular interest in the developmentally or mentally disabled. However, it is likely to prove too detailed and scholarly to sustain the attention of most general readers.

Knox is a fascinating figure, a young general physician who seems to have fallen into this area of research almost by accident. He was posted to Ellis Island during a time when screening immigrants for mental deficiencies was both a legal mandate and a topic of broad public concern. As Richardson writes:

For just four years, between 1912 and 1916, Knox was not just a conscientious physician and government employee; he was also a highly prolific scientist at the forefront of developments in the construction of intelligence tests.

Richardson argues that even though Knox’s contributions to intelligence testing were largely overlooked and forgotten, especially in the decades after the Second World War, he should be looked at as “a major figure” in the field. His work provided a key link between earlier pioneers, such as those whose work formed the basis of the famous Stanford-Binet IQ tests, and later, even present-day, researchers.

In particular, Richardson convincingly argues that Knox’s approach was groundbreaking because he set out to create tests that, at least in theory, would not rely on immigrants’ verbal knowledge or familiarity with norms of American or Western European culture. These “performance tests” were adapted and incorporated into intelligence testing and cross-cultural research around the globe in ways, Richardson says, that Knox himself “could scarcely have imagined.”

Knox’s ideas about the importance of nonverbal testing were an inspiration for the developers of many later tests, including large-scale mental testing carried out on Army recruits during the First World War; cross-cultural research on ethnic minority populations around the globe; and the Wechsler Intelligence Scale, which are still among the most commonly used assessment methods. One included a version of one of Knox’s tests until its 2008 revision.

Despite his obvious respect for Knox’s achievements, Richardson is ultimately critical of Knox-style performance tests’ ability to be truly “culture-free” and to rely on completely nonverbal means of administration and execution. Richardson cites research, for example, showing that ethnic minorities’ scores on performance tests in many different areas of the world have been higher depending on the extent to which they were exposed to Western culture by being educated in Western-style schools. In the end, Richardson writes:

The tests are artifacts constructed within a specific culture, and they cannot be expected to transfer to different cultures from the one in which they were constructed.

Unfortunately, most of Richardson’s apt analysis doesn’t come until the end of the book. He spends most of Howard Andrew Knox presenting a straightforward and detail-laden history that relies heavily on archival research but tends to bury the readers in facts, with little guidance as to how to interpret their significance.

Richardson seems to have combed the historical record thoroughly, so the lack of analysis may be due in part to gaps in the available source material. For example, although he provides a thorough examination of Knox’s academic and popular writings describing and publicizing the tests, Knox doesn’t seem to have kept personal journals or to have carried out extensive personal correspondence that would allow more in-depth insight into the rationale and motivation behind his work.

As a result, we get a detailed picture of the tests he developed – or helped develop, since evidence is lacking about exactly what role his colleagues at Ellis Island played in devising the tests. But the picture of Howard Andrew Knox the man is more thinly fleshed out, including the intriguing question of why his involvement in the field of intelligence testing was so brief. After just four years, he left Ellis Island to become a “country doctor” with no involvement in the field of research or even in administering the tests he created.

Still, the book provides an important account of the role that one man played during a fertile and important period in the history of American immigration and intelligence testing.

Toxic Childhood? How to Deal with People Who Minimize Your Experience