Reviews Home » Disorders » Depression » I Am Not Silent: Our Zoloft and Depression Story 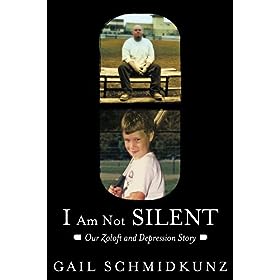 I Am Not Silent: Our Zoloft and Depression Story

The intersection of our mental health and criminal justice systems is one that is fraught with complications. Numerous questions arise when a defendant has a history of mental illness. For Gail Schmidkunz, this reality became all too apparent when his son, who has a history of depression, became a murder suspect. Schmidkunz shares this tumultuous story in his memoir, I Am Not Silent: Our Zoloft and Depression Story, giving us an illuminating look into the mind of a parent whose child has gone through one of the most difficult ordeals imaginable.

While the book does tell the story of Zach Schidkunz, a young man convicted of murder, the real heart of it is the author’s journey as he attempts to come to grips with what has transpired. The reader is witness to how a parent can make sense of a world in which his beloved little boy can go from college, to suffering from serious depression, to prison.

We are introduced to Zach as a fairly typical, middle-class child. It’s not until college that he begins to show signs of depression, including self-injurious behavior. Eventually, Zach’s psychiatrist recommends a psychotropic medication — Zoloft. Things seem to be getting better until a shocking incident: Mr. & Mrs. Schmidkunz discover a female shooting victim in their home. Even more shocking, the evidence seems to point to Zach as the perpetrator.

Gail Schmidkunz is, understandably, utterly distraught by this idea, and attempts to piece together the possible causes for this incomprehensible situation. What could possibly drive his son, a young man who had no history of trouble with the law, to suddenly, fatally shoot a female friend? What role did Zach’s history of depression and psychiatric treatment play in the incident? Could Zach be held completely responsible for his actions, or were there mitigating factors on which accountability could fall?

All of these questions have been examined by the justice system as well as by Schmidkunz. The author provides us with a vivid picture of the confusion and torment that the ordeal led to. Not content to leave his son’s fate to the courts, Schmidkunz consults with lawyers and mental health professionals to try to make sense of this terrible situation.

After much investigation, the author arrives at a controversial conclusion. One of the medications that Zach had been prescribed, Zoloft, had reportedly caused bizarre side effects in a select number of people. One of these side effects is aggressive behavior. Perhaps, the father postulates, this medication could have been the underlying cause of his son’s actions. The difficult next step was to convince others that this was a possibility. Schmidkunz discusses his battles with doctors who disagreed with his theory as well as the legal team behind the pharmaceutical company that produces Zoloft.

The questions raised in I Am Not Silent are not necessarily easy to answer. How do we determine to what extent a person’s actions may have been caused by mental illness, or by a medication one was taking for that illness? And if medication does play a part in a criminal act, whom do we hold responsible: the person taking the medication, their doctor, the company who produced the pills? Is there some type of proactive monitoring that can take place in order to prevent stories like Zach’s from happening to others in the future? These are complicated legal and ethical issues to contend with.

Whether or not psychiatric medication played a part in Zach’s actions is certainly up for debate. Though Zach was ultimately found guilty, the reader will have to draw his or her own conclusions about the verdict based on the evidence Schmidkunz presents in his memoir. But whether you agree with the author’s assessment of the situation or not, I Am Not Silent is an intriguing read. Schmidkunz presents a heartfelt, honest portrayal of the difficulties such circumstances can present to a family. Through his and his son’s story, we gain an inside look at the ways the criminal justice system deals with defendants who have a history of psychiatric diagnoses.

There is nothing that can be done to bring back the young woman that the Schmidkunzes found in their home. What caused Zach’s actions may never be fully understood. However, stories such as his can hopefully help us gain a clearer understanding of the effects of psychotropic medication and how to best utilize them in order to help those suffering from psychiatric symptoms. You may or may not agree with Gail Schmidkunz’s conclusion about his son’s crime, but it is nonetheless worth hearing his story.

I Am Not Silent: Oor Zoloft and Depression Story

I Am Not Silent: Our Zoloft and Depression Story

APA Reference
Maldonado, J. (2016). I Am Not Silent: Our Zoloft and Depression Story. Psych Central. Retrieved on July 14, 2020, from https://psychcentralreviews.com/2016/i-am-not-silent-our-zoloft-and-depression-story/