Reviews Home » Disorders » Eating Disorders » I Got My Dream Job and So Can You: 7 Steps to Creating Your Ideal Career 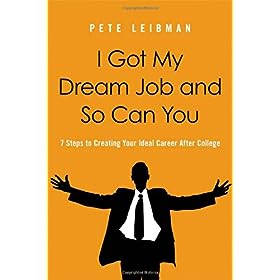 I Got My Dream Job and So Can You: 7 Steps to Creating Your Ideal Career

When Pete Leibman was a senior at Johns Hopkins University, he spent his final two semesters in desperate search of a job. He had all the usual characteristics of a good hire: he went to a top college, had a high GPA, did the internships between years and had a sparkling resume. He applied to positions online through job sites and, as the story goes, had no luck. All the while he had a dream job in the back of his head that always weighed on him. In ways revealed throughout the book, however, Leibman was able to transform his behavior and approach to his job search in order to land that dream job.

I Got My Dream Job and So Can You is not so much a self-help book as it is a guidebook. And for what it is, it’s surprisingly strong. The best thing Dream Job has going for it is the relationship between the author and the reader. As Leibman writes: “I am part of your generation, so I understand your situation. Most career books written for students and young professionals are written by authors from a totally different generation. Despite their wisdom and positive intentions, they grew up in a totally different world from the one you and I grew up in, and most of them have a very different perspective about your job search.”

This is certainly true. Wisdom cannot be discounted, but with the relatively recent changes to the job market and its operation, there must now be a premium on adaptability. As Leibman appropriately writes, most “how to get a job” books are in fact written by people who have already had a lengthy career. While this does give their points inherent legitimacy, it does not negate the fact that the world in which they achieved their jobs and built their careers is long gone. Leibman is not the ultimate — or only — authority on how to land a job, but he certainly is ahead of the curve.

Moreover, the fact that Leibman seems to know what he’s talking about helps his case. Dream Job is chock-full of worthwhile, practical and easily applicable information and strategies.

This is not to say the book will solve all your job-related problems. But if you take it for what it is and follow Leibman’s advice, you will undoubtedly put yourself in a better position than you are currently in. After all, the audience for this book typically would be discontented with their current jobs (or not have one, for that matter).

One of the best truths Leibman rams home is the importance of networking. You can apply for hundreds of jobs, but if you don’t know someone on the inside of the company, you’re going to have a hard time. Leibman knows this firsthand. He writes:

[T]he way you approach an employer initially also dictates how you will be treated after getting hired. Again, no organization will admit this to be true. However, if you get hired because you know a senior executive in the organization, you better believe you will be treated better than if you somehow manage to get hired without any personal/internal endorsements. Part of this will be subconscious, and part of this will be intentional.

Essentially, it’s all about who you know. Leibman’s not necessarily saying you should abandon your current method of searching for jobs. But he is saying you should supplement it. Instead of devoting 100 percent of your time to scouring the Internet and trying to be the first person who applies, time could be better spent by going out into the world and interacting; talking to people in related fields; networking.

Another thing that Leibman has going for him is that his book is based on real-world experiences. He went through the process that hundreds of thousands of new and recent graduates are going through. He gets it. He understands the realities:

Networking, marketing yourself, interviewing, identifying your passions and talents… none of these processes came easily to me. I struggled before I succeeded. I was not blessed with some inborn ability to conduct a job search or to achieve my dreams. I had to figure everything out on my own through trial-and-error because it was all so unclear to me.

Leibman has been in the same position as everyone reading this book. There is certainly something to be said for relatability and empathy, and Leibman possesses both qualities.

Dream Job will not land you a job. But it will put you in the right position, or at the very least give you a better idea of where to go from here.

I Got My Dream Job and So Can You: 7 Steps to Creating Your Ideal Career after College

I Got My Dream Job and So Can You: 7 Steps to Creating Your Ideal Career

APA Reference
Berkowitz, D. (2016). I Got My Dream Job and So Can You: 7 Steps to Creating Your Ideal Career. Psych Central. Retrieved on July 8, 2020, from https://psychcentralreviews.com/2016/i-got-my-dream-job-and-so-can-you-7-steps-to-creating-your-ideal-career/

Toxic Childhood? How to Deal with People Who Minimize Your Experience