Reviews Home » Disorders » OCD » I Hardly Ever Wash My Hands: The Other Side of OCD 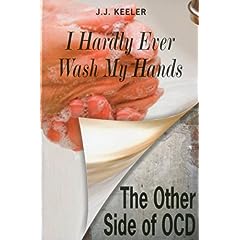 A friend of mine has obsessive-compulsive disorder. His OCD doesn’t take over his life, at least not ostensibly. He has some rituals, and occasionally he does things that raise eyebrows, but overall he’s a normal guy with a few rare quirks.

Admittedly, his case is mild. But when the average person thinks of someone with OCD, my friend is the kind of person that comes to mind. Contrary to mainstream opinion, however, OCD is a much more dynamic disease. It is multifaceted, coming in all shapes and sizes, and it is nondiscriminatory: anyone can have it. And for those who do have it, their condition may not be what you think it is. Dispelling this myth is J.J. Keeler’s central mission.

In I Hardly Ever Wash My Hands: The Other Side of OCD, Keeler writes openly and often humorously about her condition. Unlike my friend, Keeler does not need to open and close a drawer a certain amount of times. Nor does she need to make sure her desk hits her wall at precisely a 90-degree angle. She’s no Jack Nicholson in As Good As It Gets. But this does not mean she lacks irrationality.

Keeler, by her own admission, has never actually had AIDS. Yet throughout her life, she has continually thought she has been afflicted. When she was told “dirty needles” were one cause of the disease, she took the phrase literally. And when as a child she bought a poster for her room, she thought she infected herself: “After unrolling the poster against the wall and guessing it was straight, I reached into my pocket. Almost immediately the thumbtack—a dirty needle—stuck my finger. Once again, I had AIDS.”

Keeler got AIDS in many other ways as well: nicking her hand on a tree, having a dog slobber on a cut, even just looking at a public toilet soaked in urine. “Though I decided not to use it and immediately left, I got AIDS anyway.”

Worry over AIDS is far from Keeler’s only OCD-driven fear. When she read Franz Kafka’s The Metamorphosis in high school, she “was obsessively worried about going to bed as a human and waking up as a giant bug.” And when she was given a free teddy bear at a garage sale, all hell broke loose. Keeler didn’t think there was a bomb inside the toy; she knew there was.

The inner workings of Keeler’s mind are worth devoting a few lines to:

I thought about my stethoscope from my toy doctor’s kit and listening to see if I could hear the bomb ticking, but I knew that wouldn’t do any good. Obviously, it would be ticking.

I thought about wrapping the teddy bear in a protective barrier made of aluminum foil, but I wasn’t sure if that would keep the bear secured, or just keep it fresh for tomorrow’s supper.

I thought about taking the teddy bear to some rural area and throwing it away in a field. But that was no good. Someone would find it, take it home and then their home would blow up.

I thought about shoving it down one of the slits on the sidewalk curbs that led to the sewer. This way the bomb would be underground when it exploded. But the toxins from the bomb—there had to be toxins—would get into the city’s water system and poison anyone who drank tap water.

It would be a massive understatement to say that Keeler gave this issue a lot of thought. She obsessed over the idea that her teddy bear was rigged with explosives. The notion clearly consumed her at times. She considered the idea from all different angles, trying to find the best way to deal with this highly sensitive issue.

Welcome to Keeler’s life. No, she does not fret, as she writes, about the “mouse living under [her] stove. I’m not worried. I’m not anxious. In fact, I don’t really care at all.” She is not who we consider to be the typical person with OCD. Keeler instead represents the underreported segment of people with the disease. She’s not the one obsessing about the little things. The title says it all: she hardly ever washes her hands. Such things are relatively trivial to her. It’s the big things that consume Keeler.

I Hardly Ever Wash My Hands is fascinating for many reasons. First, it is elegantly written in a confident and humorous way bereft of any filler. Everything in the book is interesting and necessary. Second, it is one of those rare books that gives the reader unfiltered access to an unusual mind at work. We can see the pain, confusion and despair dripping from each page. Third and finally, it’s just a good book. And for anyone interested in learning more about “the other side of OCD,” it’s a worthwhile book.

One thing worth noting is that Keeler does not downplay the nuisance that OCD can be for people who deal with the more mainstream version. She writes: “Don’t get me wrong. OCD is often a disease marked by a debilitating obsession of all the [typical] things, but that’s only part of the story. Sometimes it’s none of the story.”

For Keeler, common obsessions are not part of her story. Hers is unique and atypical, and news to most of us. For those who struggle with Keeler’s brand of OCD, however, it’s not news. It’s life.

APA Reference
Berkowitz, D. (2016). I Hardly Ever Wash My Hands: The Other Side of OCD. Psych Central. Retrieved on April 1, 2020, from https://psychcentralreviews.com/2016/i-hardly-ever-wash-my-hands-the-other-side-of-ocd/