Reviews Home » I Hate You, Don't Leave Me: Understanding the Borderline Personality 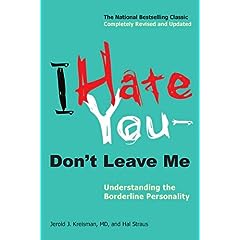 I Hate You, Don't Leave Me: Understanding the Borderline Personality

While the public is familiar with more mainstream psychological diagnoses such as depression or schizophrenia, the only knowledge most individuals have of borderline personality disorder (BPD) results from having watched Winona Ryder in the Oscar-nominated Girl, Interrupted.  I Hate You—Don’t Leave Me: Understanding the Borderline Personality was written by Dr. Jerold Kreisman, founder of an acute care facility for BPD in St. Louis, and Hal Straus, a medical and health writer for over 25 years.  The authors have used their collective experience to create an introduction to and overview of the borderline patient, one that serves to correct misconceptions, combat judgments, and educate the reader, for whom this may be the first source of factual BPD information.

I Hate You—Don’t Leave Me was first published in 1991 and quickly became one of the first classic references for BPD; however, it was not universally well-received.  Borderline patients and their loved ones, especially, viewed the book as disturbing and hopeless, emphasizing as it did the dismal prognosis of the disorder at the time.  Research has progressed remarkably since then, though, and the authors have taken great care in this revised edition to feature the scientific, therapeutic, and cultural advances made in understanding and treating BPD.

The book opens with a broad, factual description of borderline personality disorder and dispels popular misinformation.  Profiles of borderline patients serve to demonstrate the disorder’s variability in presentation, and leads to a listing of the typical symptoms and worldviews one finds.

Chapter 2 places BPD against a background of all ten Diagnostic and Statistical Manual of Mental Disorders (DSM) personality disorders, and compares and contrasts the different diagnoses, emphasizing how at times they can appear to overlap and co-present in a borderline patient.

Chapters 3 and 4 deal with the different causes and contributing factors of BPD, including genetic, developmental (based in object relations theory), environmental (trauma), and finally, cultural.  This last category is explored in greater detail, as the authors theorize that recent shifts in our societal makeup have contributed to the prevalence of BPD over the past ten years.  The rise of social media, less static identity roles, and group and family fragmentation are all mentioned as important phenomena.

The middle part of the book, Chapters 5-6, is geared toward family members, therapists, and others who may have borderline patients in their lives.  The SET-UP (Support, Empathy, Truth, Understanding, and Perseverance) system of effective communication is explained, and the emphasis is placed on BPD as an illness that requires understanding and compassion, while simultaneously acknowledging the challenges inherent when dealing with a borderline patient:

It is important to remember that BPD is an illness, not a willful attempt to get attention.  The borderline lacks the boots, much less the bootstraps, with which to pull himself up.  It is useless to get angry or to cajole and plead with the borderline to change; without help and motivation he cannot easily modify his behavior.  However, this does not imply that the borderline is helpless and should not be held responsible for his conduct.  Actually, the opposite is true. (p. 127)

It also addresses encountering BPD in the workplace and in recreation, and includes helpful patterns for these interactions.

Chapters 7 through 9 progress to the therapy process, from what it takes for a borderline patient to willingly enter treatment to what types of therapeutic approaches may be most effective (including a compare/contrast analysis), as well as the challenges therapists can face when treating BPD, both for themselves and the patient.  Chapter 9 deals specifically with medications and the advances that have been made in the standardization of protocol, although medication remains a secondary part of therapy in BPD treatment.

The final chapter of the book summarizes everything by asking the question, “Can Borderlines Be Cured?”  It is here that the much-improved prognosis of BPD is detailed, including a typical path to healing (insofar as one can be created) complete with a graph that details how many of the hallmark features of BPD, such as impulsivity and excessive guilt, can be turned to an advantage.

I Hate You—Don’t Leave Me is an extremely helpful introduction to BPD and a wonderful overview of the borderline world for someone new to it, whether a patient seeking more understanding of what is happening to them or a family member trying to relate to this frustrating and confusing disorder.  The authors provide a strong scientific background of BPD from both the DSM and the most up-to-date research on its causes and treatment, but they also make the content relatable to the layperson through the use of anecdotes and metaphors:

Her supervisors said that she lacked the academic qualifications of others and that she was abrasive, but Annette wouldn’t accept those explanations.  Incensed, she attributed the rejections to racial discrimination.  She became more and more depressed and eventually entered the hospital.  In the hospital, Annette’s racial sensitivities exploded. (p. 114)

A borderline suffers from a kind of ‘emotional hemophilia’; she lacks the clotting mechanism needed to moderate her spurts of feeling.  Prick the delicate ‘skin’ of a borderline, and she will emotionally bleed to death. (p. 12)

The issues that plagued the 1991 edition seem to have been resolved, especially as the authors took great care in ending the book, and indeed each chapter, on a less despondent and more optimistic note.

There is some conflict, though, when attempting to address the authors’ sensitivity.  They seem incredibly aware of how a patient may read this book as opposed to a therapist, and attempt to remain responsive to each of their constituencies.  For example, a special “Note to the Reader” regarding BPD terminology is included to explain the use of “borderline” as a descriptor throughout the book rather than the more acceptable “patient with borderline personality disorder”:

Although we abhor the implied disrespect and dehumanization of referring to people by their medical conditions[…], we have nevertheless chosen, for the sake of clarity and efficiency, to sometimes refer to individuals by their diagnosis. (p. xv)

Later, though, the authors verge on offensive (at least for this reader) when they mention homosexuality, twice, in direct reference to sexual perversity.

Some writers have noted an increased incidence of homosexuality, bisexuality, and sexual perversions among borderline personalities. (p. 43)

Sexual orientation may also play a part of the borderline’s role confusion.  In line with this theory, some researchers estimate a significantly increased rate of sexual perversions among borderlines. (p. 90)

Beginning in Chapter 9, the book begins to restate earlier points and go deeper than perhaps is necessary into previously explained sections.  For example, although the genetic causes of BPD are presented in Chapter 3, they are again here, with little information added.  The rest of the book is streamlined and laid out in an easily digestible manner, so it does stick out when this tendency declines in the latter sections.

Even if your personal view of the book is less than positive, however, every reader will appreciate the extent of the appendices and resource lists that conclude it.  Appendix A covers a background of the DSM classification system, Appendix B traces the evolution of BPD as we know it today, and the section of resources includes everything from textbooks to first-hand accounts to reference websites to treatment centers.

The main message of I Hate You—Don’t Leave Me is one of understanding and hope.  The book does a laudable job of presenting the main points of BPD to those who may not have previously encountered it, while also serving as a useful resource for those familiar with borderline patients, both in a professional and personal context.

I Hate You— Don’t Leave Me: Understanding the Borderline Personality

This title will be published in December 2010.

I Hate You, Don't Leave Me: Understanding the Borderline Personality