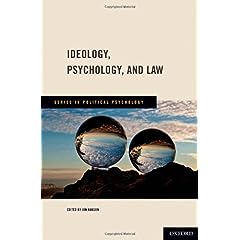 Ideology, Psychology, and Law is a wonderful collection of essays edited by Jon Hanson, the Alfred Smart Professor of Law and Director of The Project on Law and Mind Sciences at Harvard Law School. This is the first book edited by Hanson, whose work has appeared in six other books and many periodicals. Hanson also cofounded The Situationist blog in 2005, and in 2011 it won the Media Prize from the Society for Personality and Social Psychology.

Spanning 21 essays, the first of which Hanson wrote (as well as four others which he cowrote), Ideology, Psychology, and Law is an academic book that belongs either on a classroom desk or a library shelf. It’s not really the kind of book you bring to the beach for light reading. That said, for students and academics looking to examine the intersection of the three titular areas, Hanson’s new contribution is nothing short of a marvel.

Each of its essays is distinct, coherently argued, well written and worthy of reading. Hanson starts the book with his own essay, “Ideology, Psychology, and Law.” In it, he lays the groundwork for the remaining essays and gives some background on and context to the meaning of the three terms under discussion. He does not aim to define them, leaving that task to the essays that follow. Rather, Hanson provides the reasoning behind the book’s composition:

It should not be obvious what a volume titled Ideology, Psychology, and Law is actually about. After all, each category—ideology, psychology, and law—has numerous definitions and covers a vast domain. Furthermore, the concepts are not commonly understood as closely linked. One goal of this volume, however, is to help delineate the sizable overlap between the categories of ideology, psychology, and law and to show that the links between them are tighter and stronger than conventionally perceived.

Hanson’s other goal is to, in a sense, create a new field of study—or rather, to look at preexisting fields in new ways. He writes:

In bringing together some of the world’s most illustrious scholars in law, political science, political psychology, and social psychology, my aspiration for this book has been not only to illuminate the intersections among those disciplines but also to expand the ties between those fields in the hope of encouraging more interdisciplinary collaboration, research, and insight in the future.

Hanson is almost calling for some quasi-revolution in how we study these three fields. Human behavior is not only dynamic, but also largely misunderstood. In this way, the implications contained in Hanson’s book can result in profoundly new ways of conceiving of these disciplines. And by attempting to reorient the reader’s world and renegotiate his perception of reality, Hanson is implicitly catalyzing the evolution of our studies. Are there arguments in Ideology, Psychology, and Law that will be contested? Of course. But they are rooted in such substantive theory and testimony that it is not easy simply to dismiss them.

Moreover, Ideology, Psychology, and Law does not have one single or even several themes that abstractly bind the book together. Instead, Hanson gave his contributors free rein to write and argue as they pleased. In this way, readers will surely agree with certain arguments and disagree with others, and they will surely favor certain essays over others.

My personal favorites are the first section of Hanson’s introduction from which I quoted above, “Ideology, Psychology, and Law;” “Bias Perception and the Spiral of Conflict” by Kathleen A. Kennedy and Emily Pronin; “Backlash: The Reaction to Mind Sciences in Legal Academia” by Adam Benforado and Hanson,;and “Crowding Out Morality: How the Ideology of Self-Interest Can Be Self-Fulfilling” by Barry Schwartz.

The second section of Hanson’s introduction provides brief synopses of each essay to come. He succinctly describes the scholars’ arguments in readable, concise language. To Schwartz’s essay above—perhaps my favorite—Hanson writes:

Contrary to popular opinion and to legal theory, that is, people are not inherently self-interested. Schwartz shows that the ideological presumption that people are self-interested in law and in other institutions creates powerful, self-fulfilling expectations and situations. Schwartz further describes the problems with allowing market ideologies to govern social interactions and he examines the impact of economic thinking on legal justice.

I quote Hanson’s summary for two reasons: one, because I enjoy Schwartz’s essay and I think it is worthwhile, but two, and more important, I believe it shows the level of commitment to and investment in this book that Hanson professes. Ideology, Psychology, and Law took a long time to assemble, and though he himself did not write everything contained therein, Hanson did write a substantial amount and he did edit everything that did not bear his name. Given its timeliness, thought-provoking nature and ability to elucidate key and heavy ideas, Ideology, Psychology, and Law should without question be studied by those interested in its subjects. As well, Hanson should be commended for his staggering efforts.

Toxic Childhood? 10 Lessons You Must Unlearn in Adulthood