Reviews Home » Disorders » OCD » iDisorder: Understanding Our Obsession with Technology and Overcoming Its Hold on Us 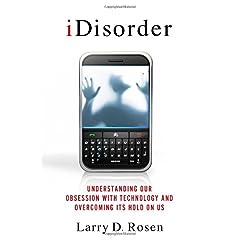 iDisorder: Understanding Our Obsession with Technology and Overcoming Its Hold on Us

One of Dr. Larry Rosen’s friends feels he must be continuously connected to his electronic devices. If he is in a conversation that is more than 15 minutes long, “he excuses himself to go to the restroom so that he can check his iPhone.” Is this a sign of addiction? Narcissistic personality disorder? Anxiety? Does this man, as Rosen puts it, have an “iDisorder?”

These are the central issues in Rosen’s new book, iDisorder: Understanding Our Obsession with Technology and Overcoming Its Hold on Us. Coauthored by fellow psychologists Nancy A. Cheever and L. Mark Carrier, iDisorder is a perceptive, thoughtful look into the world of modern technology, focusing on those that are primarily communicative.

Rosen makes it very clear at the outset that he is not by any account anti-technology: “Far from it. I have always been an early adopter, starting back in the 1970s… I have owned at least a dozen computers… I carry a smartphone and an iPad and spend hours texting my kids and friends.” This personal qualification is important, as it alleviates any fears that Rosen is on a crusade to extirpate technology from the lives of all people, young and old. Rather, Rosen understands the powers these technologies can hold over us, and, more important, he understands the possible ramifications that can result.

iDisorder certainly is a book of its time. Now more than ever, people—regardless of whether they consciously realize it—are spending far too much time using their devices. As Rosen writes: “The evidence is all around us that people are attached to their devices and oftentimes driven to use them obsessively by fear and worry. Missing out on social information, work information, and our personal pursuits can put us in a state of anxiety and even cause panic attacks, sometimes with serious consequences.”

Rosen clearly understands his field, and it is safe to say he is at its forefront. Rosen’s prose never has the slightest tinge of condescension or arrogance; the book is instead properly written from a position of authority and confidence that gives the words contained therein inherent credence and deserved attention.

iDisorder is split into twelve chapters, with each essentially focusing on one psychological disorder and then discussing how technology is contributing to or exacerbating our development of the disorder—what Rosen terms an iDisorder.

While it is simple to offer a blanket solution to the book’s central thesis—“just stop using your devices so frequently”—it is by no means appropriate. Rosen takes the stance that, for many of us, our obsession with technology is firmly psychological; telling someone to stop using his iPhone as frequently as he does is akin to telling a confirmed drug addict to limit his habit to just once a day. It’s not workable. Thus, throughout the process of discussing and dissecting iDisorders, Rosen offers suggestions.

At the end of each chapter, Rosen, in one form or another, gives some sort of game plan for tackling each specific iDisorder. In Chapter 5, “The Ups (and Downs) of Leading a Cyberlife,” Rosen closes with a lengthy section titled “Combatting a Depression or Mania Disorder.” Contained therein is a questionnaire with a scoring system to determine the severity of one’s iDisorder.

In this way, the book is part story of interest, part self-help. Rosen’s final chapter, “It’s All in Your Mind,” offers an even more detailed method of tackling our iDisorders. And with that comes a message of hope:

…many of us are on the verge of an iDisorder as our daily interactions with media technologies may be imbuing us with signs and symptoms of one of many psychological disorders, including narcissism, obsessive-compulsive disorder, addiction, attention-deficit disorder, social phobia, antisocial personality disorder, hypochondriasis, body dysmorphic disorder, schizo-disorders, and voyeurism… Luckily for us, our brains are constantly changing. Neuroscientists call this ‘neuroplasticity,’ which is basically a constant process of strengthening and weakening neural (nerve cell) connections in the brain as a function of our experiences…. Given that our brains are inundated with stimuli all day long and that the digital content currently available in our world is the equivalent to everyone in the world tweeting or blogging constantly for a century, neuroplasticity is a brain-saver.

Yes, our brains can change, and with that we can learn not to overuse our technology. Rosen boils it down well: “It’s all about being aware of and monitoring your behavior around all of these marvelous technological inventions.” Like anything pertaining to obsession, moderation is key.

iDisorder is written from a position of such eminent authority that it is difficult for a layman to critique the actual content. As well, the book is written in a way that both informs and aids. Rosen’s goal is to alert us to our possible conditions before it is too late. If it is in fact too late, though, Rosen believes that, like with any disorder, there is room for improvement, if not absolute correction.

As might be assumed, there is little in iDisorder over which to argue. The content is solid, the studies referenced are germane and compelling, and the tone in which Rosen writes is well-suited to the task at hand. Rarely does Rosen overstate his argument, as all conclusions are backed up with empirical data. With little conjecture and an abundance of wisdom, iDisorder is a book worth reading for both its prescience and its timeliness. Rosen has dedicated his career to understanding how we use technology, and for that, as well as this book, he should be praised.

iDisorder: Understanding Our Obsession with Technology and Overcoming its Hold on Us

iDisorder: Understanding Our Obsession with Technology and Overcoming Its Hold on Us

APA Reference
Berkowitz, D. (2016). iDisorder: Understanding Our Obsession with Technology and Overcoming Its Hold on Us. Psych Central. Retrieved on September 29, 2020, from https://psychcentralreviews.com/2016/idisorder-understanding-our-obsession-with-technology-and-overcoming-its-hold-on-us/