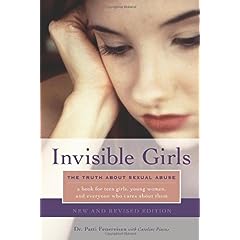 This is a new and revised edition of Dr. Feureisen’s previous book which includes comments, e-mails and letters to the original edition. The book seems geared primarily toward teenage girls but young adult women and professionals might glean useful information as well.

The contents include background information, some developmental information and explaining different stories and topics of how abuse occurs, background pathologies, and how children get through these experiences. It demonstrates different ways to heal. Although the book’s tone is simplistic — at times it reads like a non-professionally trained advice columnist who has turned her columns into a book — the most useful part for professionals is the very clear delineation of emotional states in adolescent girls and how these are misconstrued by predators who have ulterior motives. Such explanations are to be commended for their translation of emerging developmental dependency states of the immature child into womanhood and the concomitant erroneous signals either sent or received.

This interpretation is the best given in any book, text or popular, and serves as a reminder to all of us that actions are often deceiving. Dr. Feureisen simply but completely gives backgrounds into troubled families looking at truths, abuse and going through details of how girls’ minds work to get them through the actual abuse experiences. She also goes into what she calls the deepest wounds of father/daughter incest but does not look at the possibility of mother/daughter or female/female abuse.

The author similarly does not give professional discussion to psychiatric hospitalization if necessary and prefers to take an antiquated lay person’s view of such treatment. She gives examples of parents using hospitalization as a threat rather than the possibility of it being a judiciously used, sometimes necessary part of treatment, especially when there is danger to self or others.

Similarly, there is not a discussion of psychiatric medication. It has had its share of detractors, but in careful hands can be a useful adjunct to treatment. The emphasis has to be as adjunct to treatment and not substitution for treatment. In another vein, any discussion of psychiatric medications should give reasons for their use, of which there are many — including early onset abuse (which may lead to psychotic functioning), moribund vegetative depressive signs, or escape into manic-like behaviors which have served to defend against underlying pathology. This book as written would tend to make either the user of psychiatric medications or hospitalization seem not as healthy as the person who used neither.

The author has a naive sense of success rates when in point of fact, severe, profound sexual abuse is a horrendous betrayal. Its incursions into pathology is very great.

In summary, this is an excellent book for the adolescent girl and young woman who has been abused. It presents a perhaps too-rosy picture of the outcome but gives a very thorough description of development, personality, trauma and personal narratives. Professionals may find it short on descriptions of treatment modalities but the descriptors of the progression of developing emotional states in girls are superb.