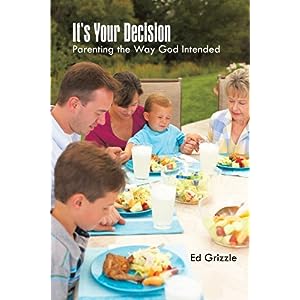 It's Your Decision: Parenting the Way God Intended

Resources for parents practically overwhelm the retail market. There are books, CDs, DVDs, magazines. Stores like Babies “R” Us and specialty boutiques are easy to find. With It’s Your Decision: Parenting the Way God Intended, Ed Grizzle has attempted to add a book to the stack of reliable parenting resources.

In it he describes his own parenting method, which, he says, involves applying God’s plan and acceptance of Jesus Christ into your life. But his book — unlike other, much better Christian parenting books — barely explains anything, and is mediocre at best.

Grizzle ran a ministry program, also called “It’s Your Decision.” Through it, he writes, he counseled many troubled individuals. He worked with police officers and talked with inmates. He also worked in a hospital with mentally challenged individuals, he writes, and says he uses what he saw there as an example of how abusive parenting can lead to further challenges for children into their adulthood. Overall, he says, his book is based on more than 60 years of life experience.

Grizzle claims that the Bible should be used as a guidebook for raising children and that through Jesus Christ a parent will be more adept at raising kids. It’s Your Decision is a call to parents to both accept Jesus Christ as their savior and to love, accept, and discipline their kids. He calls for his readers to pray to God for guidance; he also ends each chapter with a challenge to his readers meant to assist them in implementing the points he’s made. The book covers family planning, disciplining kids once they’re born, helping those who have been abused, and the role of grandparents.

Yet Grizzle’s book is barely an outline of what he likely was trying to say. He states that the Bible should be used as a guidebook for parenting but only loosely uses scripture to back up his points. Rather than discuss and dissect the ways in which the Bible applies to parenting, he casually quotes scripture and leaves the interpretations up to the reader. While some may find this refreshing, it begs the question of how he uses this approach in his own parenting, and what we are supposed to learn from his book.

Another major issue with Grizzle’s work is his overreaching generalizations and assumptions. For instance, he states that it is important that parents of adopted children let them know early on in life that they are adopted. He claims that in doing this the parents will avoid causing more issues later in a child’s life. However, Grizzle provides no evidence of this save for one example. He points to the alleged story of a man who was preparing to leave to fight in the Vietnam War. His parents revealed to him before he left that he was adopted. He allegedly went into a mental health facility rather than to Vietnam. But as I read it, I thought, what does that one dated example really show us?

As Grizzle shares his life story at the beginning of the book, it seems as though he projects his own experiences and issues onto everyone else in the world. Rather than acknowledge that it is possible for a person to change and extend beyond their circumstances, he seems to work within the finite lines of his own life. If he had, perhaps, used additional research to back up his claims, his book may have approached something reputable. But alas, there is no research, no use of scholarly texts at all.

To make matters worse, his writing is a step above that of a sixth grader. Poor grammar, misspellings, incorrect word usages abound. Was there an editor? It appears that there was not. “Your” rather than “you’re.” “Their” or “they’re” rather than “there.” Commas and semi-colons used haphazardly. A book barely over 100 pages should only take a few days at most to read through analytically. It took me two weeks because I constantly found myself pulling out a red pen to edit. This book is better off being sent back to the drawing board, rather than being purchased.

For readers and parents looking for a Christian-based resource on parenting, allow me to recommend The Faithful Parent: A Biblical Guide to Raising a Family by Martha Peace and Stuart W. Scott. The authors have backgrounds in biblical counseling and the book is well written. Skip over Grizzle’s work; unless his book is rewritten, there are much better guides available.

It's Your Decision: Parenting the Way God Intended