Reviews Home » Parenting » January First: A Child's Descent into Madness and Her Father's Struggle to Save Her 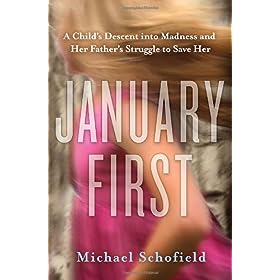 January First: A Child's Descent into Madness and Her Father's Struggle to Save Her

While riding in a car with her father, young Jani Schofield tells her dad, “I don’t want to go to the hospital, but I think I need to.” She is five years old.

“Most three-year-olds are in bed by now, but most three-year-olds are not geniuses like my daughter,” begins January First: A Child’s Descent into Madness and Her Father’s Struggle to Save Her, a harrowing story of parents trying to discover what’s ailing their intelligent, precocious, yet violent and eccentric daughter. Jani’s high intelligence is how her father, author Michael Schofield, first tries to rationalize her increasingly bizarre behavior

The bizarre behavior ranges from her menagerie of imaginary friends, a devotion to the made-up world of Calilini, and a lack of interest in interacting with children her own age to sudden violent outbursts and attempts to physically assault her infant brother, Bodhi, whenever he starts to cry.

When Jani is found to have a high IQ during autism testing, but not genius-level, Michael and his wife Susan are dismayed. Could it be that something else is afoot?

We first see Jani’s terrifying dark side when Schofield describes a typical evening with the family. The infant, Bodhi, is sleeping, when Jani decides to turn up the television volume louder and louder. Her father asks her to turn it down, but she insists she can’t hear it. When the noise wakes up Bodhi, Michael and Susan take their well-rehearsed places with the urgency of two firefighters arriving on the scene of a five-alarm fire. Susan picks up the baby to protect him while Michael rushes to the kitchen to get him some formula to keep him quiet. But before he can feed the child, “Jani calmly walks around the coffee table that separates her from Susan and Bodhi. Susan starts to get up, recoiling, twisting to shield Bodhi. Jani reaches up and drives her fist into Susan’s stomach, just below Bodhi’s dangling legs.” Her father grabs her, immobilizing her as best he can, as she attempts to punch and kick him.

This rather stunning scene illustrates what these parents are up against: a girl who is clearly bright and vivacious, but who is given to vivid hallucinations, desperate violence, and uncontrolled rages. Unfortunately, the realization that their daughter is not developing normally is only the beginning of the fight to help her. As Michael and Susan begin to try to understand what’s happening, they realize that psychiatrists and psychologists don’t necessarily have the tools to make their child “normal.” And, slowly, they realize that diagnosis and treatment won’t be simple or easy.

Parenting two young children is never easy on working parents, but with Jani always on the verge of erupting and attacking her brother, one parent can never be alone with both children. The tensions that are apparent between Susan and Michael from the beginning of the book understandably worsen as medications for Jani repeatedly prove to be less than effective. When Susan calls Michael as he’s walking the dog with Bodhi to tell him she’s admitted Jani to a psychiatric hospital, Michael becomes furious at Susan for overreacting. He feels that if he were just with Jani all the time, he could help her control her violent moods.

Indeed, the author often lets us know that he’s the only one who can deal with Jani on her level, attempting to meet her where she is mentally rather than trying to get her to follow the normal rules of society, as her mother tries to do. When Jani decides she’s done with whatever they’re doing she walks away without a care, ignoring the adults’ attempts to get her to follow their rules. At these times, her father jumps up to accompany her or distract her, while her mother attempts to get her to act in accordance with the generally accepted rules of the situation. This difference in their parenting styles becomes immediately apparent, and is an obvious deep source of friction that never seems to be resolved during the time period covered by the book.

Jani’s story is fascinating and troubling, but the story of her parents is nearly as troubling, with Michael’s frustrations apparent in the way he speaks of other adults in his world, especially his wife. Readers may be surprised that the couple is still together by the end of the book, considering the level of contempt Michael seems to feel for Susan. When Michael attempts suicide by swallowing an entire bottle of Lexapro, we understand the amount of energy he’s been expending thus far, and how much of himself he’s given up to keep his daughter from falling apart. One wonders whether, if the author could have accepted more help and weren’t as invested in the idea that he’s the only one who can console Jani, he might not have been driven to the brink of suicide.

By the same token, both parents’ devotion and persistence is what ultimately finds some measure of relief for Jani — though relief, according to the author’s blog (www.janisjourney.org), is temporary. “It’s not even good days and bad days,” he writes. “It is good moments and bad moments.”

The book drives home the murky reality that people with mental illness and their loved ones live in. For a diagnosis as serious as schizophrenia, and even for many less serious diagnoses, treatment is complicated and usually less than a hundred percent effective. The family’s story emphasizes how vital it is that loved ones advocate for their mentally ill family members, especially children. With Jani’s first institutionalization, her parents perceives the staff as uncaring and rude, and will not let her be re-admitted, opting instead to admit her in to UCLA. This proves to be a wise choice, but one that might not have been made had Michael and Susan not been aware and willing to demand better treatment for their daughter. Often, patients and their caregivers believe that healthcare providers know what’s best for them and choose to give up their power to the medical establishment. But this is not always the best choice.

Reading about Jani and her family’s struggles makes one feel empathy for the families of children with mental illness, but not hopeless. The book ends on a positive note, as Jani finds some measure of solace in a therapeutic horse-riding program and the family ultimately copes with her ambivalence towards her brother by renting two apartments in the same complex, so they can still be a family but both children can grow up without violence. Coping with a child’s mental illness takes ingenuity and courage, Schofield shows us. But it can be done.

January First: A Child’s Descent into Madness and Her Father’s Struggle to Save Her

January First: A Child's Descent into Madness and Her Father's Struggle to Save Her

APA Reference
Reviews, B. (2016). January First: A Child's Descent into Madness and Her Father's Struggle to Save Her. Psych Central. Retrieved on July 12, 2020, from https://psychcentralreviews.com/2016/january-first-a-childs-descent-into-madness-and-her-fathers-struggle-to-save-her/