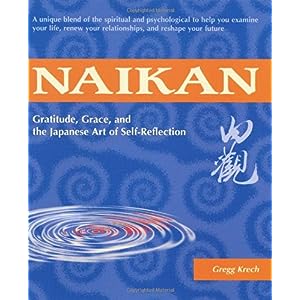 As a coach and counselor, I’m occasionally on the lookout for good books on self-reflection, but I try to avoid the ‘same-old’ self-help style that so many mimic (no matter how good the advice).

I have to admit that as a creative artist, too, I am a bit turned off by big, crass lettering that shouts out across front covers. Those that appear the most subdued and classy, or uniquely artistic, usually don’t disappoint on the inside.

I came across a good one last year, a good decade after its publication date. Naikan: Gratitude, Grace and the Japanese Art of Self-Reflection by Gregg Krech. Intimate in its unusual 6 x 7 inch size, it is a perfect hand-held accompaniment to inward reflection on our ways of relating to people in our lives. The sections of the book read fluidly, with an ease as gentle as the content matter.

It spans “the roots of stuff” to “attention to what’s not there” to contemplation on whether we are giving grief or gratitude to others, and much more. One chapter is fascinatingly called Relationships as a Vehicle for Training. Segments of chapters are artfully interposed, only very occasionally, with a quote or poem or apropos reflection from others. Some are by monks; others quite unexpected (“Must I hold a candle to my shames?” — Jessica, in The Merchant of Venice).

As well, Krech’s gem lays out the foundations of the more formal practice of Naikan, considered the Japanese equivalent of psychotherapy.

A Note to Mental Health Professionals is included as a postscript, where the author puts forth ways that Western practitioners might incorporate some of Naikan’s facets. Dichotomies between traditional Western therapy and Naikan are explained, such as that traditional therapy “validates the client’s experience” while with Naikan “the therapist helps the client understand the experience of others.”

Perhaps nothing encapsulates Naikan at its core better than a description of a suggested nightly practice, carried out just before bedtime. Reflection on the day specifically asks, “What was received today and from whom?” What was returned to others?” Krech defines that daily self-reflection of this manner “grounds you in the realistic experience of your life,” which often can be limited, “colored by your feelings” when instead seeing actions, behaviors, and occurrences only individually.

I realized when I came upon and pondered these two questions that hunting down a new book, and the practice of Naikan itself, was worth it. This is parsing life purely to its simple truth, universal and timeless.

It could resonate among the lives of our ancestors, who unlike modern man couldn’t worry about slights and grudges, reputations and posturing, or interpersonal conflicts.

Lisa A. Miles has been uniquely blending her expertise in self-development, mental health and the creative arts for over 25 years. Based in Pittsburgh, Penn., she is a coach/ consultant who advises individually and for business, author of two books (one about an institutionalized artist), professional speaker, and composer/ performer on violin and mandolin (including collaborative work with Jungian therapists). Also available as a coach working virtually, Lisa is included in the international Life Quality Improvement directory liquic.com. Visit her webpage at lisamilesviolin.com