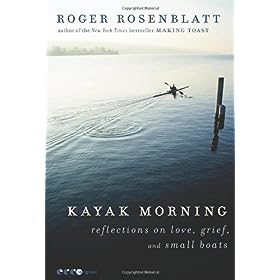 Roger Rosenblatt’s Kayak Morning: reflections on love, grief, and small boats mirrors the structure of grief itself: nonlinear; highlighting times of confusion, searching, yearning, aching, and love; full of small revelations that prove useful; and forming a space we dip into and out of, as the kayak paddle enters the water and rises again. Do not come to this book expecting either a how-to manual about dealing with grief or a straightforward narrative. Unlike Making Toast, Rosenblatt’s earlier work about surviving the loss of his daughter, Kayak Morning is not a story, per se. Do, however, enter this book to gain a deeper understanding of grief and the spiritual struggles that it ushers in. Read it like a meditation, loosely stitched out of nature and insight about the nature of death and continuance. You might also read it as a kind of permission to explore your own relationship with loss and finality, topics we often avoid.

The book begins, “Two and a half years after our thirty-eight-year-old daughter, Amy, died of an undetected anomalous right coronary artery, I have taken up kayaking.” Rosenblatt weaves his reflections on love and grief via the thread of his experiences in the kayak, surrounded by nature. Throughout Kayak Morning, he takes on the challenge of creating a future story that includes some kind of hope.

As a seminarian studying grief dynamics, and one who has recently suffered the deaths of family members and friends, I appreciate Kayak Morning’s honesty. Grief cannot boast clearly demarcated stages. Nor can it be, through work or blessing, magically eliminated. It is immoderate, a disheveling of the psyche, arriving unpredictably, in ways that are as individual as we are.

While the first challenge after a loved one’s death might be mourning, memorializing those who died and finding ways to move through the days and months that follow, another challenge accompanies it: How do we reorganize the psyche, wrestling with our expectations of life, or God? In Rosenblatt’s words: “What is the difference between grief and mourning? Mourning has company” (p. 39). Although he collects wisdom from literature, history, and friends, inviting their company into his consciousness, he still must face his grief alone.

Rosenblatt’s greatest strength as a writer may be his descriptive skills, which recall those of E.B. White. As much as Kayak Morning is about grief and loss, it is also about the natural world, including its human aspects. The author uses similar structural techniques for different “movements,” or themes, throughout the book, shifting his observations from nature to humans to his own life. Once I got a feel for his style, this structure helped me think deeply and easily about the topics he raised.To water everything returns. Larvaceans with their mucous nets. The comb-shaped jellies, and the barrel-shaped salps. A thirty-foor siphonophore, a shovelnose guitarfish, a grouper using its pectorals as oars. They return. A chambered nautilus returns, as does a cuttlefish that disappears in the smoke of its own manufacture (p. 62).

These glimpses of species are followed by an in-depth description of the Kemp’s ridley sea turtle, which swim thousands of miles as part of their migratory pattern. The turtles serve as deeper testament to Rosenblatt’s theme of return as a part of life. Next, he explores the theme of return in human history:

The epic voyages of the Greeks always ended with a return home….So too for the Jews, whose communal story consists of continuous departure, return, and renewal….But in the New World, epic voyages did not tend towards a return. They went relentlessly forward… The Greeks and Jews has a more satisfying sense of adventure, I think. Every voyage brought them home, even if the home to which they returned was not the one they left. (p. 65)

From here, Rosenblatt turns his lens to a moment before Amy’s wedding: “there, as I stood admiring, all the years [before that moment] returned.” He does not talk about his own questions, but his writing creates spaces in which to consider loss. If life has an inherent property of return, how does that function inside us after a death? Should we be like the Greeks and Jews, returning “home” although it’s irrevocably changed? How does the “relentless push” of the “New World” affect our grieving? What is memory’s role to bring us closer to those we have lost, and to separate us?

I first read Kayak Morning straight through, and quickly. However, I recommend reading it slowly and, as I did, re-reading it later. Let yourself float through, stop and ponder an image or idea, and follow it where it leads.  Simply put: it’s worth the journey.