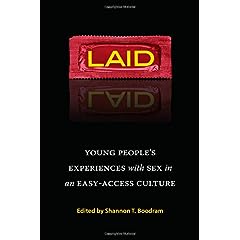 Laid: Young People's Experiences with Sex in an Easy-Access Culture

I admit it: I was more than a little hesitant to dive into Laid: Young People’s Experiences with Sex in an Easy-Access Culture, edited by Shannon T. Boodram. My fears of being overwhlemed or disturbed by the stories proved to be unfounded; when I finally did begin to read, I was pleasantly surprised.

I had hoped that Laid would give some depth, and put faces to, the disturbing headlines that one hears about the sexual experiences of kids today. I was not disappointed.

Laid‘s editor, Shannon T. Boodram, a young Canadian journalist, was motivated to create this book by her own disappointing early sexual experiences. Boodram adds her own stories to a collection of submissions from both male and female North American young adults, aged 18 to 25, gay, straight and bisexual. All of the incidents are from the contributors’ teen years, in some cases, as very young teens.

Laid is a gritty, witty, sometimes moving, sometimes annoying, group of writings that explores a variety of sexual experiences: the good, the bad, and the really, really bad.

It’s an excellent read for anyone with an interest in, and concern for, today’s youth, and their lives as sexual beings. It’s also a good resource for kids themselves, but only if an informed adult is available to answer questions, to clarify certain points, and to provide guidance around some of the issues raised.

Boodram sets out to educate us, and, in her words, “… to arm you with the information, hindsight, and confidence to pursue an amazing sex life.”  While this book, in itself, cannot live up to that lofty goal, it nonetheless provides enough information, variety of experiences and perspectives, to leave the reader with plenty of food for thought and to motivate you to learn more (and there are plenty of resources listed at the back of the book to help you do that).

Even at the ripe old age of 51, I’ve learned something from this book. I was inspired to reevaluate my own sexual journey, to reflect on what worked, what didn’t, and perhaps most importantly, to clarify what I want now. No small accomplishment for a collection of 40 stories by young writers with a wide variety of backgrounds and experiences.

The stories are divided into five chapters. The theme of the first section is hookups (casual sex between uncommitted partners); the next is a collection of stories of positive sexual experiences. Chapter 3 explores the physical consequences of sex (pregnancy, STDs, abortion); Chapter 4, which might well have been the most challenging to read, contains stories about date rape, gang rape, and childhood sexual abuse. The editor’s deft handling of the topic and her selection of writings with honest, straightforward storytelling makes this chapter at once both powerful and non-melodramatic. The chapter’s concluding list of real-life situations which can leave one vulnerable to abuse makes this one of the most effective sections in the book.

The final chapter is composed of stories from young men and women who, for a variety of reasons, choose to abstain from sexual activity.

While most of the submissions were from women, the editor did a good job of including a variety of stories from young men, with the notable exception of Chapter 4. The editor herself acknowledges this oversight and is candid and regretful about her failed attempts to find young men willing to write about their experiences of being sexually abused. It’s an unfortunate omission, but the chapter nonetheless provides a breadth of experiences that capture the variety of emotions, situations, and circumstances that can and do lead to sexual abuse.

The book is informative without being preachy. A question-and-answer section follows each chapter. I found these sections problematic, and less effective than the first-person material. Both the editor and a number of the book’s contributors answer the questions, which are posed by the editor and related to the chapter’s theme. Her rationale for including these questions after the fact is to (if you’ll pardon the expression) flesh out some of the details that are missing in the anecdotal material.

Unfortunately, having the writers provide most of the answers is problematic. These young men and women are not sex experts, nor, in many instances, do they have the experience, maturity, education, or qualifications to respond adequately, accurately or appropriately to some of the questions that are posed. I found this disconcerting, at times alarming, and antithetical to the book’s stated goal of providing education.

I also was uncomfortable with some of the advice provided by these young non-experts, who were unqualified to give such advice. I felt that the book would have been stronger had the editor resisted the attempt to be all things to all people. Frankly, the stories would have stood admirably on their own, perhaps with the introductory and concluding chapters.

While the editor claims in the introduction that this book is for everyone, the material was inconsistent with that goal. For example, following each chapter is a section called Checkpoint. The Checkpoints are a series of multiple-choice questions intended to give readers some insight into their own sexual knowledge, personality and so on. Boodram is adamant that completing these Checkpoints is integral to getting the most out of the book.

I therefore dutifully began to respond to the first set of questions (even though, through sloppy editing, the questions weren’t numbered), but was brought to an abrupt halt. One question asked if, on a first date, I would go to someone’s house on Friday at 9 p.m. One of the answers was, “c) Cool. Are your parents going to be home or at least asleep?” At my age, I’m pretty sure that any date of mine’s parents would be either deceased, or safely ensconced in long-term care. While this provided some humor for me, it was also distracting. Nonetheless, much of the information included in these Checkpoints was valuable, especially to a young reader.

Since Laid is a collection of essays, poetry, and letters from a wide variety of writers, one would expect the quality of writing to be uneven. It is. While this is somewhat forgivable, a few instances of poor editing is not. Some of the writing is confusing to the point of obscurity. Overall, however, one can look past the book’s less-than-literary qualities to appreciate the power and authenticity of some of these young voices.

One poignant and memorable example is in Chapter 3. Writer Anthony Paul talks about impregnating his 19-year-old girlfriend. He enumerates the options of: keeping the child, adoption, or abortion. Paul says, “We were both completely against one of the options … unfortunately, it wasn’t the same one.” In this strong, simple sentence, Paul captures the multifaceted dilemma of teenage pregnancy. His story of raising his daughter belies stereotypes, which is another of the book’s strong suits.

In her concluding chapter, the editor lists “10 Things I Wish I’d Known Earlier.” Her wit and wisdom shine through when she advocates more comprehensive sex education in public schools, noting that in sixth grade she received a full unit on dinosaurs, but only two half-hour sessions on sexual education.

“Since then,” says Boodram, “I’ve never had to escape a raptor, but I’ve been confronted by plenty of penises.”

Laid‘s honesty, rawness and sometimes gut-wrenching stories are not for the faint of heart. But there are nuggets of poetry and genuine wisdom in its pages, too. I would encourage anyone who cares about today’s North American youth to experience, through Laid, a cultural reality that kids are confronted with each and every day. Doing so may just help us, and them, to better shape both individual and societal sexuality into a healthier, more satisfying, and positive experience for everyone.

Laid: Young People’s Experiences with Sex in an Easy-Access Culture

Laid: Young People's Experiences with Sex in an Easy-Access Culture