Reviews Home » Letters to a Young Madman: A Memoir 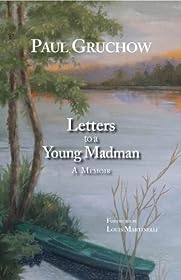 When Paul Gruchow first started putting Letters to a Young Madman together, he wondered how his disjointed journal entries, quotes, and medical research could work to create something coherent and meaningful. Though every entry contains a different experience, a different thought, a quote that Gruchow could relate to, any reader of this book is able to clearly understand the message that Gruchow is sending.

“To assume sickness as a career, of course, is to resume the role of a child.”

Gruchow communicates with incredible transparency how depression feels. He allows readers to feel his abyss and to empathize with the feeling of waking up in the morning paralyzed and unable to get out of bed for days at a time. He helps the reader understand what it feels like to lose one’s self worth after being put on disability and being defined by what one is unable to do. The reader plunges down with Gruchow, departing from a life in academia and family ties and entering a life spent in a garage and trying to take solace in the fact that it’s not a mental health facility.

Gruchow gives a vivid view of problems with our mental health system. He shows exactly where the various treatments and medications he was prescribed failed in their ability to help him recover. He’s able to show through his research that over the course of mental health care history, nothing has really helped, and what we have now isn’t much different. In one entry, he writes that every new treatment is said to experience a 70-80 percent success rate when it first emerges on the market. After a period of time, these treatments lose popularity as people discover they don’t actually work. A new treatment comes out with a high percentage of success to erase the preceding treatment from the market.

“I don’t think we’ll have a truly successful mental health system until the mentally ill become genuine partners in their own healing, and the only way to do that is to make them healers, rather than merely objects of healing.”

Though the book is more of a narrative of Gruchow’s experiences, the author also writes about what he believes may have been able to help him. He bares his unsettling experiences and tells his story in a way that allows the reader to not only understand, but empathize. And that story, though disjointed, leaves no gaps or questions as to what Gruchow was feeling at the time or why.

As a student of psychology, I was struck by how different the patient perspective is from the practitioner perspective when it comes to mental health care. Reading Letters to a Young Madman was an eye-opening experience for me, and gave me some much-needed insight into what we need to change if we really want to help our patients.

More than empathy, Gruchow’s book left me with a clearer idea of what I can do for someone who is going through an episode of depression. Being able to get a glimpse into the mindset of a friend or relative who is suffering from depression can be infinitely beneficial for someone who wants to help but has no idea how to do it.

Letters to a Young Madman can allow professionals in the mental health system to truly see their patients and do more to help. If read widely enough, the book could help ease the stigmas surrounding those with depression.