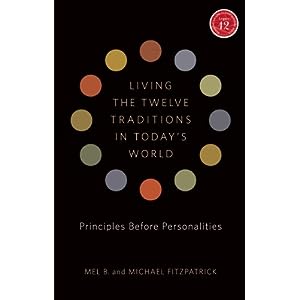 Living the Twelve Traditions in Today's World: Principles Before Personalities

One of the critical components of the highly successful Alcoholics Anonymous is its stated anonymity. Thus, it makes sense when authors Mel B. and Michael Fitzpatrick denounce the relatively recent trend of celebrities making their alcohol and drug recoveries so public. It’s not that the authors don’t want these people to get help; it’s that they’d rather they do so quietly. By making headlines with every sound they make, these celebrities are violating one of the most important of AA’s twelve traditions: “Anonymity is the spiritual foundation of all our Traditions, ever reminding us to place principles before personalities.”

As stated above, the most important of the traditions is the one that urges anonymity. On this, the authors quote from the foreword of the first edition of the book, Alcoholics Anonymous:

When writing or speaking publicly about alcoholism, we urge each of our Fellowship to omit his personal name, designating himself instead as ‘a member of Alcoholics Anonymous.

Very earnestly we ask the press also, to observe this request, for otherwise we shall be greatly handicapped.

We are not an organization in the conventional sense of the word. There are no fees or dues whatsoever. The only requirement for membership is an honest desire to stop drinking. We are not allied with any particular faith, sect or denomination, nor do we oppose anyone. We simply wish to be helpful to those who are afflicted.

Given the importance placed on anonymity throughout AA’s history, it is somewhat startling to note the disconnect between the group’s intentions and the intentions of certain famous individuals. Often celebrities seemingly use AA or similar organizations as a pawn—part of a public plea to save face and get people to stop slandering them. This line of thinking is in direct contrast, as well as a slap in the face, to the integrity of all AA members.

The traditions act as something of a constitution or a charter. They implore members to find solidarity behind ideas such as: not having an opinion on outside issues so that the group can never be drawn into public controversy; not promoting, but simply taking in those who come; having each group be autonomous; and ensuring that the sole requirement for membership is a stated desire to stop drinking.

The twelve traditions have worked quite well for the group. The authors write:

The general feeling of unity we have in AA today is remarkable, especially since the membership is made up of people who acknowledge false pride and resentment as major personal problems. Right from the beginning, however, the AA pioneers envisioned in the Big Book that, ‘Every alcoholic who journeys will find a Fellowship of Alcoholics at his destination.’ This has been true for decades, and it’s now possible to find a welcoming AA group throughout much of the world.

The central reason AA has been such a success, the authors write, is because of its rock-solid traditions. Although the members comprising the group may change, what binds them together will not. It is for this reason that the authors beg those who pervert the traditions to refrain from doing so.

Living the Twelve Traditions in Today’s World is a well-researched, well-written history and explanation of AA. Mel B. is a longtime AA member who has authored several notable recovery books, and Fitzpatrick is one of the leading archivists and historians specializing in the creation of AA’s twelve-step movement. The authors do a commendable job of combining historical records, firsthand accounts, primary knowledge, and excerpts of speeches to create a compelling narrative that not only details the reasons for the traditions’ development, but also their importance to the success and integrity of AA.

Living the Twelve Traditions in Today’s World: Principles Over Personality

By Mel B. and Michael Fitzpatrick

Living the Twelve Traditions in Today's World: Principles Before Personalities