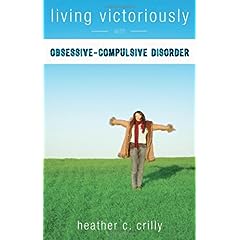 As a clinician with an interest in OCD I was excited to have the opportunity to review a recent (2007) book on the topic entitled “Living Victoriously with Obsessive-Compulsive Disorder.” Heather Crilly is very candid about her qualifications as she introduces the mandate of the book: ”This book is to encourage those of you who suffer from Obsessive-Compulsive Disorder. I am not an expert in this field but I am diagnosed with the disorder.” (p. 25) In fact, Crilly identifies herself as a “mental health service provider working in a Christian agency,” a point that was of particular interest to me as I was curious about any specifics of Christian counseling of OCD.

This 138-page book is a quick read. It is organized into 15 chapters, two of which are introductor. Two others — one at the beginning and one at the end of the book — are extended case vignettes about a woman named Eva. The remaining chapters are a mix of information about OCD, the author’s own struggle with OCD and such other issues as stress, low self-esteem, approval-seeking, and fear of rejection. A good deal of the book is devoted to how the author attempted to reconcile her Christian worldview with the meaning of mental illness. Crilly narrates her life story with a very distinct, highly conversational and courageously self-disclosing voice. She pulls no punches as she shares her perspective on OCD prognosis in general and her own recovery status:

If you are looking for a magic story that will give you a secret formula to wipe away Obsessive-Compulsive Disorder, then you have chosen the wrong book (p. 17).

[Y]ou might think I would have it down pretty well by now, but I do not. The OCD monster resides inside me and either wants me to be miserable, because it is familiar, or does not want me to trust Christ because He may not handle it the way I would want. (p. 117)

Please do not misunderstand me and think that I am completely cured. Every day brings on new challenges. (p. 123)

Somewhat surprisingly, Crilly concludes (both in the title of her book and in the very last sentence of the book) that “[y]ou can live victoriously with Obsessive-Compulsive Disorder, I promise” (italics hers).

Crilly does not appear to provide any original, unique interventions for the problem at hand and appears to be generally recapping her experience of being in treatment for OCD. A good bit of the book (I estimate 25 percent) is devoted to a set of issues that may or may not be co-morbid with OCD. In particular, Crilly shares what appears to be signs of perfectionistic syndrome (of the approval-seeking, rejection-fearing, neurotic variety). Less informed readers may be led to believe that perfectionism — which is a hallmark symptom of OCPD, Obsessive Compulsive Personality Disorder, not to be confused with OCD — is a necessary part of OCD. Diagnostically that is not the case. More careful differentiation of these two similarly-sounding but differently-presenting clinical problems would appear essential in this context.

A major strength of the book is the examination of the interplay of Christian worldview and the meaning of mental illness. Here’s how Crilly frames this discussion:

I often felt ashamed and completely hopeless when the pastor preached that worry was a sin. […] I knew that worrying did not do me any good, but I thought that being anxious about things that were out of my hands was better than sitting and doing nothing. I just wanted to stand up, right in the middle of the church, and yell out, “Okay, Pastor, you’ve beaten in your point, but how do I stop this behavior?” […] I was so hurt and angry with God because I thought I was willing to give [worry, anxiety] to him, but I also felt that if he really took it from me, I would be left with nothing. I would be in a body with a foreign identity! What made me even more discouraged was acknowledging that God had created me with these tendencies. He knew me inside and out. So my question was always, ‘Why did you make me this way if you knew it was sin to worry?’ (p. 66)

This is where the book gets really fascinating, from my perspective, as Crilly struggles with the answer to her questions. She seems to arrive at the following conclusion: “Obsessive-Compulsive Disorder has shown me many things. One lesson I have learned is to depend on God for my thought processes through the day. God has used this ailment to focus on Him.” (p. 113)

She quotes Psalm 66:8 — “[God] trained us first, passed us like silver through refining fires” — then follows up: “The key word in this passage is ‘train.’ God uses experiences and circumstances to train us to see if we will trust Him.” (p. 116)

If, however, Crilly believes that OCD is a blessing of sorts, an opportunity to connect with God, a kind of spiritual training, then it is not entirely clear why she is struggling to overcome OCD in the first place. While she manages to crystallize this dilemma, she, to my inspection, does not appear to resolve it within the confines of the book. Yet this agonizing search makes for a memorable reading.

Crilly does not seem to be afraid of controversy in regard to her Christian beliefs. In a chapter entitled “Even Jesus Had Boundaries” she proposes that “statement ‘What would Jesus do?’ could be used as a message of guilt.” (p. 75) She further astutely suggests that assertive boundary-setting is an important part of self-care and admits: “Sometimes, I choose not to help.” (p. 78)

Perhaps the biggest downside of the book is that it limits the scope of its reach with the following proclamation (on p. 32): “If you do not know Christ as your personal Savior the following next steps are for you. First, you must come to realize you are a sinner.” Following this somewhat harsh spiritual diagnosis, Crilly offers a four-point conversation the length of one paragraph, only to conclude further below: “Congratulations! You are now a brand new Christian!” This unsolicited evangelical tour-de-force, of course, seems to be a great oversimplification of a spiritual journey.

In summary, despite Crilly’s victorious voice, her proclamation of victory over OCD appears premature. This is how she puts it in the last sentences of her book: “OCD will not go away one hundred percent until I get to heaven.” (p. 126) Regardless of whether it is enough for a reader looking for help with OCD, it appears enough for Crilly: “That is okay with me because I have learned that this illness keeps me dependent on Christ and what He can do through me.” And this is apparently what matters.