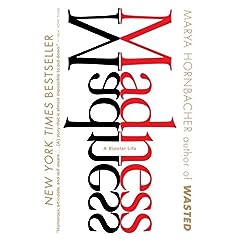 Ms. Hornbacher’s writing style is raw and in-the-moment, and she doesn’t mince words with very detailed descriptions of her thinking, feelings and behaviors — some of which may be too much for readers easily triggered (especially the self-injury cutting scene which kicks off the book in the Prologue; be warned, the book has more self-injury and possibly triggering behavior throughout).

Bipolar disorder is characterized by mood swings from elated highs to depressing lows. And in rapid cycling, such mood swings occur more frequently than normally. A person with such a diagnosis can typically lead a very challenging life if they don’t find treatment that works for them.

The joy for me in reading a book like this is that it brings into extreme focus one woman’s life and struggle with mental illness in a way rarely experienced by most of us. Her writing style makes it feel like you are there with her — in her life, in her mind — experiencing the same things that she is. You not only get a close-up look of bipolar disorder, but also of all of her attempts at diagnosis and treatment, including multiple hospitalizations. Such episodes paint a picture of how difficult it is to get straight, simple answers for one’s emotional pain and trauma. And how difficult it is to find a treatment regiment that actually works. You end up feeling just as frustrated as she was in trying to get help for her problems.

Real life is messy, and so is the book. Written with real-world dialogue (including the liberal use of profanities) and messy situations of a life in progress, the book is not for the feint of heart. I find Ms. Hornbacher’s style and wit interesting and engrossing; others may find it more self-involved and navel-gazing. But isn’t that why we read a book of this nature — to gain first-hand perspective of what it is to live with a debilitating illness like bipolar?

Ms. Horbacher’s life makes for an amazing read, and this memoir won’t disappoint. The numerous setbacks she experiences only makes you appreciate every time she finds a moment of happiness or peace. Shortly into the book, you begin rooting for her, as though she were some fictional character in a novel. And that’s the clincher — she’s not fictional, she’s real. The stories she tells are of a real person trying to find their way in a hard world that doesn’t always understand or make any allowances for someone struggling with mental illness. Madness, as she notes, isn’t pretty or predictable:

Here’s the Hell of it: madness doesn’t announce itself. There isn’t time to prepare for its coming. It shows up without calling and sits in your kitchen ashing in your plant. You ask how long it plans to stay; it shrugs its shoulders, gets up, and starts digging through the fridge.

That’s the crux of it — even when under treatment and “doing well,” some people with bipolar disorder and other serious mental disorders sometimes feel like they live in a state of siege. They’re never sure when the next episode is going to rear its ugly head once again.

The book is highly recommended, if you can stomach the rawness of it and the descriptions of the self-injury behavior, for anyone who has a loved one in their life grappling with bipolar disorder, or really any serious mental disorder. For people who have bipolar disorder, Ms. Hornbacher’s memoir will likely sound like a familiar tale. 299 pp., softcover.

Another review of this book:

Bipolar disorder and literary genius are often linked, the disorder considered a brilliant madness that produces great writers. Famous examples are Ernest Hemingway, Sylvia Plath, and Kay Redfield Jamison, who wrote the book Touched by Fire (among others) on creativity and manic depression. She herself is an ultra high achieving person living with bipolar.

Here now is Marya Hornbacher to push the image further with her memoir, Madness. Hornbacher is a gifted writer who’s navigated the positive and negative effects of the illness on her writing career. She writes about writing while relating her life events in a way that isn’t self-aggrandizing. Well, not too much. This is a person who has had some very grandiose moments during her manic episodes, and enjoys sharing them in Madness.

But, she has led a truly grand life. Her first memoir, Wasted, a detailed (very detailed) account of her struggle with an eating disorder, made her rich and adored by millions. By reflecting her mirror image to readers she showed them that she was similar to what they see in their own mirrors, and inspired some to recover. Wasted helped readers with bulimia and anorexia to perceive themselves in new ways.

There is a similar dynamic here in Madness, using bipolar disorder. Revealing herself in this memoir about the turmoil of manic depression in her life (she wasn’t diagnosed until after Wasted was published, which is why that book doesn’t go into it), she created a doll to carry away. It’s a vividly and detailed replica of a person who lives with bipolar, its features both unique and universal. It’s all made of text.

Separating a behavior from a symptom is a challenge to everyone fighting stigma. Is the person acting strangely due to a moral failing or biology? Obnoxious or manic? Lazy or depressed? Slutty or hypomanic? By laying down snapshot after snapshot Hornbacher creates overlays, patterns clearly found in symptoms that are absent between episodes. In doing this she also shows us cracks in the mental health system: an early therapist ignored signs of mania and told her to self-soothe with a bubble bath, while a nurse accused her of malingering when she protested that Prozac was making her more manic and agitated (a common reaction to Prozac among people with bipolar, in the early days of SSRI antidepressants most doctors didn’t connect the dots – some still don’t). She describes these encounters with psychiatrists and therapists with humor, but it’s wry to bitter humor.

A spoonful of whipped cream is lavished on top. With ECT and the disorder itself causing amnesia, memories are lost, memories are blurred, and some are perhaps fantasized in impressionistic streams, but they do swirl into place as sincere and emotionally accurate. Hornbacher is diagnosed with Bipolar I ultra-rapid cycling. She describes her mood swings as diurnal (waking depressed, becoming hypomanic at night) as well as longer underlying cycles in seasonal episodes. Predictable for her is to be manic in summer, depressed in winter. Studies have also identified people who are manic in spring, and suicide rates also peak at that time of year. But in the bipolar spectrum, it’s different for every body. In the DSM-IV a manic episode is defined as four days or more of sustained symptoms. As more researchers are learning lately, though, and as Hornbacher describes from her own life, mixed states with symptoms of both depression and hypo/mania are more common than previously believed. It’s a problem when some mental health professionals don’t recognize or treat it appropriately, and this happened to her more than once.

The book jacket boasts that this memoir will “…powerfully change, too, the current debate on whether bipolar in children actually exists.” Memories plucked from childhood, going back as far as age four, are offered as proof of its existence. Developing an eating disorder at nine and doing cocaine at thirteen are explained as self-medicating her mood swings. I’m not sure that her testimony on the existence of childhood bipolar is compelling, but obviously she was not just, as one psychiatrist condescendingly labelled her, an “angry little girl.”

Hornbacher seems to have that competitive streak sometimes seen among people with severe mental illness: her disorder is the worst and she is the sickest. She’s an admitted perfectionist and overachiever so I suppose it’s no wonder. In some chapters she describes going into episodes so bad that she wanders around dazed and lost (but always somehow finds her way home) or can’t think well enough to work (but does finish writing a novel). She may be more capable than she’s giving herself credit for. But she would win a few “most extreme” prizes. The book opens with a scene describing a “slip” that severed an artery, the gory images and sequence far more dramatic than things most people have done. Heightened by vital, kinetic words.

This book is more than a memoir; it’s beautiful prose that exemplifies what is almost a new sub-genre. Work about her process, about herself, through her process, with exquisite insights that surely didn’t come from a mind that is too cognitively impaired. But describing helpless psychosis makes for better heroism, more to admire as clarity re-emerges from dark fogs.

Ultra high-achieving women who’ve written memoirs about bipolar disorder: Kay Redfield Jamison, Patty Duke, Terri Cheney, Jane Pauley, and now Marya Hornbacher. She’d invite them to a fabulous dinner party, perfect in every detail from the crystal and silver to non-alcoholic wine. Even in that ideal setting, among the books of those extremely smart and talented women, her memoir shines just a little brighter.
Madness: A Bipolar Life