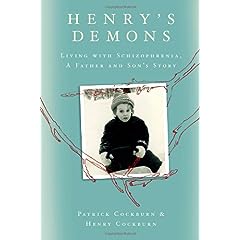 Henry’s Demons is what madness is all about. Patrick Cockburn, war correspondent for The Independent in London, writes this book about another war — the war against schizophrenia within his own son, Henry. Moreover, Henry contributes several chapters to the book, writing about his psychotic experiences from the contemporaneous inside.

Henry’s Demons rings many bells for me. Henry ran away from mental hospitals over thirty times. I tried to run away once — from Fulbourn Mental Hospital while I was a student at Cambridge, UK. I saw the tooth mugs were red, so I concluded the place was a communist establishment — it was during the Cold War — so I ran across the cricket field in my pajamas. I was chased by half a dozen strong male nurses who brought me to the ground with a rugby tackle. They brought me back in and gave me an injection of instant chlorpromazine – not the same as a slow-acting depot.

The effect was miraculous: I immediately relaxed, came to rest and said, “I’m sorry about that.” That experience, together with later bitter consequences when not taking my medicine, help to explain why I now never refuse to take the antipsychotic medicine prescribed for me. However, I do take a keen interest in my medication and expect to be consulted as to my views. Once I even asked for a second opinion from a leading professor of psychiatry.

Henry, on the other hand, used to hide his clozapine tablets in his mouth and spit them out in secret. Just as did Judi Chamberlin, one of the leaders of the American empowerment movement, who died last year (see her Confessions.)

Henry is not sure he is mentally ill. He knows that he hears voices and that some people do not hear voices. Recent research has shown that some people who hear voices are not mentally ill (see e.g. C. Choong et al). But Henry clearly is, because his voices lead him to do things which are a danger to himself – things which hurt him, but also cause intense worry and stress to his family and enormous trouble for the authorities.

Henry is not a danger to other people. His book, co-authored with his father, describes madness as it really is. Amid the controversy over whether schizophrenia needs a new name, the Cockburns describe what the condition is actually like. The picture they paint is truly authentic. And Patrick, aided by his able editor Samantha Martin, does not mince words. He calls the disorder by its name – madness.

If schizophrenia were given a new name, many argue that the new name would soon acquire the stigma of the old name. Henry clearly resists the idea that he is schizophrenic, and rejects the attempts to treat him as such. For myself, I accept the label, and set out on the long road to recovery, the final end of which I know I will never reach in this life. I accept the medication with its side effects, and together with my friends monitor my own mental state and appropriate medication with fanaticism acquired over 50 years’ experience.

The vividness of the description of Henry’s Demons will serve to allay the fears of the general public that the typical person with schizophrenia is violent and a danger to others. Recently, in Alphen aan den Rijn, here in the Netherlands, a madman shot six innocent bystanders before he shot himself. The case is not typical. Schizophrenics, as the book points out, are far more likely to hurt themselves than other people.

By describing the reality of the unreal, the Cockburns redress the balance and create an open and honest representation that will lessen the stigma. This in turn will reduce the self-stigma that almost certainly contributed to the shooter in Alphen stopping his olanzapine, which he had done, according to the Algemeen Dagblad newspaper. By helping to write his own story, Henry is learning to more willingly accept his clozapine, which is now being crushed and put in water to prevent him from hiding the tablets in his mouth prior to spitting them out.

There is one particularly striking paradox toward the end of the book. Patrick, the father, hankers after the old mental asylum system and vigorously criticizes the trend toward community care. His son, Henry, hates his incarceration and makes frequent appeals against his sectioning. It is to be hoped that this yearning to get free will be the catalyst that facilitates a more gracious adherence.