Reviews Home » Making Habits, Breaking Habits: Why We Do Things, Why We Don't, and How to Make Any Change Stick 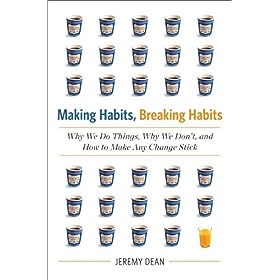 Making Habits, Breaking Habits: Why We Do Things, Why We Don't, and How to Make Any Change Stick

Mixing roughly three parts information with one part practical technique for yoking habits to the service of self-improvement, Jeremy Dean’s Making Habits, Breaking Habits: Why We Do Things, Why We Don’t, and How to Make Any Change Stick tours the last hundred years of psychological research on habit and synthesizes an impressive amount of insight into human habit formation and, for that matter, de-formation.

Dean, an English lawyer turned psychologist, is the founder and proprietor of the website PsyBlog, which he’s maintained steadily since 2004. This is his first book, and one suspects it won’t be his last. He effects a direct, bloggerly style, mercifully unclouded by the stultified prose plaguing many psychology authors whose backgrounds are different from Dean’s (i.e., career academics). Nevertheless, the book is carefully — even densely — footnoted with a trove of research studies, general readership psychology books, and online resources.

Professional psychologists likely won’t find a great deal of new material in Making Habits, Breaking Habits, and neither will voracious lay readers who’ve digested the likes of Dan Ariely, Daniel Kahneman, Timothy Wilson, James Pennebaker, Martin Seligman, and others of their ilk. Yet Dean’s book remains worth a look for these readers, if only to sift through the bibliography’s many nuggets and to read Dean’s thoughtful chapter on treating online habits.

Dean divides his book into three main sections: “The Anatomy of a Habit,” “Everyday Habits,” and “Habit Change.” He explains what habits are, how they show up in daily life, and how the average individual can set about changing, forming, or ceasing various personal habits ranging from the benign to the existential.

Habits in the popular imagination are most closely associated with either virtuous or vicious activities. On the vicious side, we think of deleterious behaviors like excessive alcohol consumption, cigarette smoking, and doughnut eating. On the virtuous end of the ledger we find beneficial routines like regular exercise, charitable donations, and daily meditation. Yet habits are inherently neither good nor bad, explains Dean. They are merely behaviors repeated with great frequency and regularity and most often performed with little to no conscious intention.

Whether good, bad, or indifferent, habits are an incredibly powerful and pervasive psychological phenomenon.

“In the war of habit versus intention,” Dean writes, “the fight is massively fixed.” Citing a large meta study by Wendy Wood and J.A. Oulette, Dean illustrates that regularly performed habits — from ordering coffee to checking email — involve little or no conscious intention. “It was only when [habitual] behaviors were performed once or twice a year — like getting a flu shot — that intentions took over from autopilot.”

Which is not to say that habits do not follow intentions, Dean tells us.

“Much of the time even our strong habits follow our intentions. We are mostly doing what we intend to do, even though it’s happening automatically,” he writes. “When washing our face each day, picking up an espresso on the way to work, or cleaning our glasses, it’s because at some point in the past we consciously decided (or someone decided for us) that these things were worthwhile activities, so we kept repeating them until they were automatic.”

If habits are automatic executions of intentions consciously set in the past, this means we can all end up performing behaviors that are misaligned with our long-term goals. For example, your expensive pre-work espresso stop may have made sense when your spouse was still earning an income, but does the habit serve you now that you’re a one-income household with a third mouth to feed? We know we should economize in this situation, and yet most of us will likely remain as profligately caffeinated as ever.

“What does this mean for our attempts to control ourselves and our chances of making changes?” Dean asks. He organizes the last two thirds of his book around answering this question. (Spoiler alert: consider re-routing your commute away from Starbucks rather than relying on a shaky mixture of willpower and good intentions for baby’s tuition fund.)

In the book’s second section, Dean begins by elucidating how habits exert their omnipresent influence in daily life—from routine social interactions, to work, to travel, eating, and shopping. He then shifts to the darker side of habits, examining personal habit pathology as reflected specifically in obsessive-compulsive disorder and depression. Later, Dean zooms out to examine habit pathologies at the societal level relating to plane-crash prevention, seatbelt usage, and environmental protection.

Dean wraps up the second section with a strong survey of online habits, incorporating the latest psychological studies into an analysis of web multi-tasking, email, and Twitter. Synthesizing a wide range of research, Dean examines online behavior through the lens of Skinnerian pleasure reinforcement and through Csíkszentmihályi’s famous concept of “flow.”

Are you one of those people who just doesn’t understand Twitter? Perhaps the concept of variable interval reinforcement can shed some light:

As with email, on Twitter, an interesting tweet could arrive at any moment, but you don’t know when. You could get a batch of interesting tweets one after the other or nothing for a few hours. Because the intervals vary, users get used to the frustration of not getting anything interesting for a while—but they keep checking anyway.

(If you’re reading this article online — perhaps at the office — do you truly understand how you arrived at this page? You might do well to order Making Habits, Breaking Habits before you get back to what you were doing when your Twitter feed announced a new book review on Psych Central.)

The book’s final section moves through a survey of practical techniques for forming beneficial new habits and for breaking undesired old ones. The latter activity turns out to be a difficult proposition indeed. With considerably less grace than old soldiers, “old habits really do die hard,” writes Dean. “Even after habits have apparently faded away through lack of repetition, they still lie in wait to be reactivated.”

The reason cigarette smoking is so addictive, Dean says, is that it combines two cast-iron habits: daily contextual behaviors (like coffee drinking) plus the biological imperative for regular nicotine infusion. That’s the bad news. The good news is that “the best way to break a bad habit is to pair it with a new one.” For example, you pair your biological nicotine craving with the new behavior of chewing gum instead of lighting a Marlboro.

Dean concludes with a guide to practical habit formation and de-formation techniques relating to health, creativity, and happiness. He examines smoking, exercise, art, and work. As in the rest of the book, Dean’s academic overview of habit changing techniques and mechanisms is solid and substantial, though I wish he had provided more personal or third-person examples. While Making Habits, Breaking Habits is more scientifically grounded and less prone to overly tidy conclusions than Charles Duhigg’s 2012 bestseller The Power of Habit, Dean’s book lacks the compelling narrative force that the journalist Duhigg so effectively imposes on the material.

In addition to craving more specific and involved anecdotes, I found myself wishing Dean had sharpened and expanded upon his practical advice, which at times became repetitive. The book likewise could have benefitted from the addition of some interactive, “workbook”-like material. An attractive feature of recent heavyweight works like Kahneman’s Thinking Fast and Slow and Seligman’s Flourish lies in the frequent opportunities afforded the reader to test and measure herself with a variety of simple but highly informative psychological diagnostic tools.

Ironically, these weaknesses derive from one of Dean’s major strengths: namely, modesty. Dean neither evangelizes for a favored theory nor beats the drum for his own proprietary “habit cure.” Commendably, he merely sets the table for a reader to make his own decisions and implement his own modification regime. For my part, I took away a newfound enthusiasm for some long-forgotten CBT techniques and a resolution to avoid sugar and Twitter in the new year. Unfortunately, in so doing, I fell into the classic pitfall of over-general intentions that Dean warns about near the end of his chapter on healthy habits:

The true aim of personal change is to turn our minds away from miracle cures and quick fixes, and adopt a long-term strategy. Habit change isn’t a sprint; it’s a marathon. The right mindset is to wake up tomorrow almost exactly the same person, except for one small change—a small change that you can replicate every day until you don’t notice it anymore, at which point it’s time to plan another small change….

Fair enough. When I feel like desert at night, I’ll brush my teeth instead. My nasty Twitter habit will just have to linger on until I’m svelte and cavity-free.

Making Habits, Breaking Habits: Why We Do Things, Why We Don’t, and How to Make Any Change Stick

Making Habits, Breaking Habits: Why We Do Things, Why We Don't, and How to Make Any Change Stick

APA Reference
Diedrick, B. (2016). Making Habits, Breaking Habits: Why We Do Things, Why We Don't, and How to Make Any Change Stick. Psych Central. Retrieved on July 11, 2020, from https://psychcentralreviews.com/2016/making-habits-breaking-habits-why-we-do-things-why-we-dont-and-how-to-make-any-change-stick/