Reviews Home » Man and Woman: An Inside Story 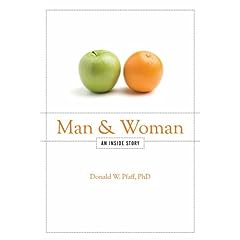 It is perhaps the most basic divide among living things — male/female, boy/girl, men/women. We often look at each other with puzzlement; remember Freud’s famous question, “What do women want?” (Never mind that he went on to conclude that women want to be men.) All too often, explanations of gender or sex differences are oversimplified. Not only is the devil in the details, those details are absolutely necessary if we want to speak intelligently about this issue that continues to fascinate us.

Dr. Donald Pfaff, professor and head of the laboratory of neurobiology and behavior at The Rockefeller University in New York, begins with an explicit goal of giving us the most up-to-date, jargon-free story of genetic, hormonal, neural, and social factors underlying differences between males and females. The differences he explores are not only behaviors, but also abilities, desires, and diseases. It’s an extremely complex story he tells, and he mostly succeeds with his jargon-free storytelling. What a fascinating story it is.

With a chapter title echoing one of Raymond Carver’s best short story collections, the introductory chapter provides a careful outline of what scientists fight about when they fight about sex. It provides a great introduction to the book, because the reader gets a very real sense of the author, with his clear passion for the material, his insight and knowledge, and his charming voice. I penned a smile in the margin when he wrote “Males will be aggressive toward other males…..Females will be amazing as they….”. By the end of this chapter, I was hooked.

Chapters 2 (Chromosomes for Him and Her), 3 (Hormones on the Brain), and 4 (Neonatal Hormones, Brain Structure, and Brain Chemistry) cover material that may require you to call upon your biology courses from high school or college, and they may slow you down if you aren’t a professional scientist. It would be a mistake to put down the book! Persist, reader, and take your time through these chapters because you will learn about some truly fascinating processes. You’ll also learn a lot about the nature of scientific inquiry, which Pfaff interweaves throughout the book in a lovely way. At the next party you attend, you may not want to toss off “Did you know another gene that showed up in Jessica Mong’s experiments as sexually differentiated during the neonatal critical period codes for an enzyme called prostaglandin D synthase (PGDS)?” But you may want to share the story surrounding GnRH (Gonadotropin Releasing Hormone). GnRH neurons control all of reproduction, but they are not born in the brain, as all other neurons are. Instead, GnRH neurons are born on the surface of the olfactory pit – in our nose! – and migrate up the nose, along the bottom of the brain, and then turn into the hypothalamus. As Pfaff humorously notes, this is true from “fish to philosopher,” and from “mouse to Madonna.”

You can read the slightly dense material in these chapters in three ways: 1) you can simply read it for the story, without stopping to struggle through some of the more complicated details; 2) you can read slowly and carefully, and remember what you learned in Bio 101, and understand the details; or 3) you can already be a scientist. At any rate, Pfaff concludes each chapter with a brief section titled The Story So Far, so every reader can hang on to the road map and come away with the most important information.

The remaining chapters address mating and parenting; males fighting; females befriending (males, too); pain and suffering; the perilous times, newly born and adolescence; and sex gone wrong. Through these chapters, Pfaff continues to draw out a subtle and complex story of sex differences, maintaining his tight focus on genetic, hormonal, neural, and social factors without resorting to broad claims that cannot be supported by the data he presents. In discussing sex differences in pain, for example, Pfaff quotes Dr. Karen Berkeley: “the burden of pain is greater, more varied, and more variable for women than men.” He goes on to explore a range of mechanisms underlying this difference, some of which may be surprising. Lower blood pressure is associated with greater sensitivity to pain, and women typically have lower blood pressure than men. Uterine disorders can radiate pain widely to muscles. He outlines a fairly complicated story relating to women’s hormones, and concludes that the best pain medicines are likely to be different for men and women.

The concluding chapter, “Bottom Line,” could make an enticing addition to any gender studies course packet. While bringing together some of the material presented throughout the book, Pfaff covers brain sex and gender identity, gender role assignment, cognitive differences and intellectual overlap (calling out Larry Summers at Harvard), male and female personalities and mating strategies around the world, and sexual preference. This chapter does not present a summary of the book; it is less about retelling the story than it is about moving carefully outward, to the issues that we currently discuss and debate.

This is an absolutely fascinating book, written in an engaging style wherever possible. Dr. Pfaff does not ‘dumb down’ the material; even though it is presented with a minimum of jargon, some of the material may be difficult to follow without focused attention. Because this somewhat difficult material is necessarily presented at the front of the book, to provide a foundation for all that follows, some readers may become discouraged and miss a great opportunity to listen to this leading scientist tell an intricate and constantly expanding story.

How to Deeply Connect During Difficult Times