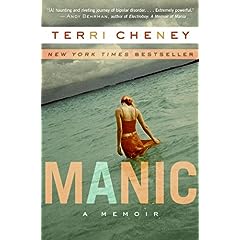 I read Terri Cheney’s Manic: A Memoir with a bit of suspicion.

While living a Jackie Collins-like lifestyle as a Beverley Hills entertainment lawyer to the stars, she endures ECT without anaesthetic (and bit half her tongue off), a brutal night in jail, two suicide attempts with dramatic rescues, a severe eating disorder, and a glamorous romance ended with the cruel statement, “I would marry you in a minute, if it wasn’t for the manic depression.” There’s much more, too. The first chapter comes on strong, reeling with an overabundance of intense action. Surely some is embellishment?

Cheney introduces the 240-page memoir with the caveat that her memory is impaired from both bipolar and its treatments. It is common for amnesia to accompany mania, and sad that ECT has caused permanent memory damage in her. “The world has never seemed as sharp and clear as it did before the ECT.”

She goes on to say names and places have been changed and ends with, “This book represents what I remember. This book is my truth.” With that statement, what is verifiable and what is fiction no longer matters. It’s a truth, her truth, and not necessarily the truth-truth.

It’s written to heighten the drama, absolutely, and incidents like flying 14 kites on a cliff in a thunderstorm are easy to enhance. An arrest, an outburst, a chapter about a private hospital stay, another chapter about a relationship gone bad; the events stand on their own and are remixed rather than presented in a linear sequence. She has structured her story into a book so readable it’s been charged with being “beach reading.” It has a beautiful ending, too, that will surely prompt your smile. Cheney is a visibly talented writer who can affect your emotions with her own. I hope she will publish some clearly designated fiction in future.

Meanwhile, this bestseller is a sensation and maybe that’s partly due to some incredulity. Maybe I don’t want to believe it? Is it cynical controversy? But, her anecdotes have elements familiar to anyone with the disorder. Dangers of mania, and the sensations of madness are vividly described. Why shouldn’t this memoir be real if it’s got that? Extreme highs and lows are how it goes.

She surrounds herself with beautiful things, especially an expensive chic wardrobe, for that reason. Admitting to snobbery toward other mental patients (who “didn’t feel like real people” in a hospital), she explains why.

“A hundred years ago, insanity was diagnosed by appearance–the so-called science of physiognomy. We haven’t come all that far since then. … So when you have a tendency to go mad every so often, it isn’t safe to be unkempt, ever–not in your manner, your speech, and especially not in your looks.

Sometimes I think that a hundred-dollar haircut is all that stands between me and a fourteen-day hold.”

Maybe that does help her to be so very high functioning. I’ve done the same thing at times to camouflage interior chaos, to keep from being a stigmatized stereotype seen as out of control. It’s necessary in the workplace and at social events. But, in Cheney it seems to be an obsession. She’s so very into being fabulous that she chooses a long black cashmere dress to die in because it wouldn’t get wrinkled.

Now, there’s something only someone who obsesses over suicide when depressed or in a mixed state (with symptoms of both depression and mania, it’s the most dangerous state in bipolar because there’s energy to act on suicidal ideas) would understand. The many details involved in planning. If she’d only read about mental illness that sort of thing would not likely be mentioned.

Details like that piled up and as I read further through the text, I became more convinced it isn’t a hoax. Cheney ultimately demonstrates a deep and authentic understanding of bipolar disorder.

“True mania never steps out the door in anything less provocative than spike heels or slingbacks.” That’s framed in fashion terms again, but it is clear.

It’s also true that mania is more a state of agitation than feeling high, as in “highs and lows” of bipolar spectrum disorders. Many people understand that to mean high as in euphoric. Sometimes there is a sense of euphoria but it’s accompanied by easily-triggered irritability. Grandiosity brings with it a flood of ideas at great speed. Cheney describes taking notes just to keep up with her thoughts. She also describes the edginess, the need to seek out experiences, people and things that drive things like manic shopping sprees. Every person with bipolar has a story about wacky things they bought while manic or hypomanic. What is Cheney’s? A dozen garden gnomes, even though she had no garden or yard. Definitely that qualifies as manic spending. Cheney had lots of money to spend, too.

Not so much now, as she’s become disabled by the disorder. She is now a mental health advocate who founded a weekly support group in Los Angeles and serves on the Community Advisory Board of the UCLA Mood Disorders Research Program. She is now sharing her experience to help others, and Manic: A Memoir is a great vehicle.

There are some profound aphorisms to be found in its pages. My favorite is also a great take away message for anyone feeling depressed: “The cruelest curse of this disease is also its most sacred promise: You will not feel this way forever.”