Reviews Home » Disorders » OCD » MANipulated into Fear: There is Always a Pattern 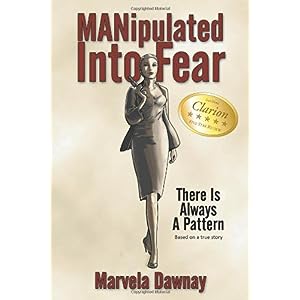 If you are new to reading books about how manipulative and cruel men can be to the women they profess to love, the book MANipulated into Fear by Marvela Dawnay can be validating.

Dawnay tells us that, as a young woman, she fell in love with a charismatic, slightly older man and ended up marrying him three times before she fully understood that he really never loved her, that he did not know how to love anyone. Then, finally, the patterns of his behavior became unmistakably evident, and she had to leave him behind for good.

There are countless successful women who are finding themselves in abusive relationships, be it physical, emotional, psychological or all, with men who no one would believe would harm a soul. As otherwise smart women, it takes time and convincing to believe that yes, this is happening, and although your family and friends only see the “great guy,” you are involved with a sociopath or psychopath whose primary role is to suck the life out of you.

This book is particularly helpful to those women who are just coming upon such a realization. Dawnay walks the reader through the 13-year hell she survived, sharing all of the details of the relationship — from first falling in love to selling her things and buying new ones on credit to restore his, through three divorces to at last recognizing his patterns and actions were real and harmful and not a reflection of her intelligence.

If you’re not new to the phenomenon, everything you’ve read or experienced before is likely summarized in the introduction. “Sometimes Rolf seemed to care about me; he was able to fake his feelings. I found that Rolf had no remorse or feelings for anyone… I always felt Rolf was two different people.” Dawnay writes. Those who have survived this type of abuse know what happens next: Dawnay talks about some of the worst parts of being with him. “Rolf was very good about getting family members, other people, attorneys to take his side. He always told them that I was crazy and that the things I said were not true. He tried to make them believe that it was all in my mind. It was as though Rolf wore a mask and other people did not see him unmasked.”

Throughout the book she talks about how she came to these realizations and the addictive personality patterns that accompany this kind of man. Usually of low self-esteem and into alcohol, drugs, or both, these men charm you by putting you in the center of their universe, make you feel like you’ve never felt before. Then seemingly out of nowhere comes the anger and with it the patterns of abuse, like aggressive or unwelcome sex, sex with others, making you feel worthless and crazy, and basically going against every sensibility you have about love and commitment.

The first time you encounter this, it can take a long while to decide that, whoever is right or wrong, you’ve had enough. Rolf and the author would go to church together, she writes, and he would treat her like the only woman who ever existed. But once lulled into that false sense of believing what you begin to know doesn’t feel sincere anymore, she explains, the honeymoon phase ebbs, you’re shot down by the most vulgar language, insults, and false insinuations designed to shame you, and the cycle of abuse begins.

Drinking, drugs, other women, then crawling back with remorse are the patterns you can bank on. But who is going to believe you when to the outside world he is Mr. Charming?

“Never take for granted that you know a person,” Dawnay writes. “Often women like myself do not know they are being manipulated into fear. We do not even realize that we really are afraid of the person because we have adapted to his way of life,” she summarizes in the introduction, and then goes on to demonstrate for 300 pages with details.

Anyone who understands this life will recognize it by the time she reaches the first sentence of Chapter 1. After the introduction and prologue that summarize the familiar patterns, Dawnay starts her particular story, beginning with one of the better lead sentences for this type of book: “I am forty-eight years old and just purchased a .38 caliber revolver.”

She then details the variety of ways abusive, sociopathic, or psychopathic men go about torturing otherwise smart and successful women, making their efforts particularly abominable because these woman are chosen for such qualities. Men without conscience choose these women as their victims precisely because these women will fight themselves to the very last second of sanity before sharing their perceived shame with those who they hope will believe them.

Thankfully, the reality of the commonality of this story is beginning to crack through the walls and be recognized as a real and serious problem in society. Thus, if you’re new to this reality, you will want to go through it with someone else as Dawnay describes the life punch by punch, literally and figuratively. If you’re a little more well read, aware of the patterns, and validated by the truth of this phenomenon, you may want to share the book with someone you think might be going through this but has not yet had the courage to acknowledge it. For those, this will be a tremendously validating and hopefully life-altering read.

APA Reference
Stone, J. (2016). MANipulated into Fear: There is Always a Pattern. Psych Central. Retrieved on July 15, 2020, from https://psychcentralreviews.com/2016/manipulated-into-fear-there-is-always-a-pattern/

Narcissistic Parenting: Is It Really Protection or Merely Projection? (Pt 1 and 2)