Reviews Home » Manopause: Your Guide to Surviving His Changing Life 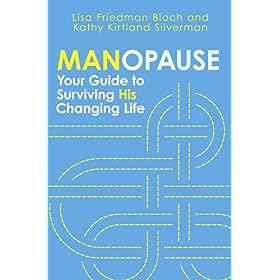 If ever a book were written with a clearly defined purpose, it is Manopause: Your Guide to Surviving His Changing Life. The book, co-authored by Lisa Friedman Bloch and Kathy Kirtland Silverman, is meant as a sort of field guide for wives (and perhaps other female relatives) of middle-aged men who are going through midlife crisis. The intended audience is clearly educated, middle-class women. But despite some of the book’s shortcomings — including a somewhat condescending tone toward those of my gender, I, a man past midlife — found it quite informative as well.

The introduction kicks off the book in good fashion, explaining how the authors’ personal dilemmas with their manopausal mates was one motivation for the writing. The book is organized into two parts: a shorter first part of four chapters, which explains why men are the way they are, and a second and longer part (eight chapters) that gets more specific, focusing on hormones, sex, work, family, and the meeting of manopause and menopause.

The work seems well researched and organized in a clear, intelligible fashion. While the book achieves its purpose in explaining what the midlife male is going through and how spouses can understand this change and be supportive, the writing, although clear and informative, suffers from an overly earnest, hortatory tone that becomes grating over time.

According to the authors, research and theories about midlife travails are a relatively recent thing, with the term “midlife crisis” coined in 1965. Gail Sheehy’s book Passages, written in the 1970s, was most probably the vehicle that launched the concept of midlife change into the popular culture. In their own book, Bloch and Silverman state that “midlife crisis” is too strong a term for the middle years and that they instead prefer “midlife adjustment.”

Part One begins smartly with a chapter that is essentially two multiple-choice quizzes. The first asks the presumably feminine reader how much she knows about men. There are questions about sex, hormones, depression, brain function, and divorce rates. I, a male who has left midlife behind, took the quiz and was surprised and a little chagrined when I scored in the bottom and most ignorant level. My wife scored a few points above me, enough to put her in the bottom of the middle level. My score, the authors felt, made me a novice in knowledge of the world of men and, if I were a woman, an ideal reader of the book. (I did better on the second quiz, which dealt with cultural pressures on men.)

The following chapter, “What it means to ‘Be a Man,’” is probably one of the most informative in the book, highlighting biological differences between the sexes. Womanhood is a biological given with confirmation at first menstruation, the authors write, while manhood is much more nebulous and has to be earned over and over again. Men face pressures that women don’t face and are subject to social expectations that the authors call “The Mandates”: achieve success; suppress emotion; be daring; don’t be feminine; avoid homosexuality; disconnect sex from emotional intimacy; be self-reliant; and revere duty and sacrifice.

Here, the authors go on to explain that women are more accustomed to physical change (monthly cycles) than men who may find their changes—dropping of testosterone, energy decline, hair loss, shrinking of muscle mass, and so on—much more frightening. Manopause is a fearful time for men and spouses should understand that much of their man’s behavior may be fear-driven. “If he’s like most manopause men,” the authors write, “your man is feeling out of control, vulnerable, and helpless to some degree. But one thing is for sure: He can’t show you he’s worried. He can’t even admit it to himself, much less talk about it. Remember, according to the mandates, he must show no weakness.” Instead of opening up, we’re told, men exhibit “bad behaviors”—mainly defense mechanisms—while dealing with inner anxiety about manopause.

In the second part of the book, the authors make the point that midlife can be an especially dangerous time for men, with a suicide rate for those in their 40s and 50s three times higher than the national average. The topic of depression is handled well, except for what I felt was an over-emphasis on violence in the depressed midlife male. The authors also recommend professional mental health treatment in a rather Pollyannaish way as if it’s a fail-safe solution, omitting to mention that for some people depression can be intractable.

The chapter on testosterone was for me very informative (remember my score on the first quiz showed that I had nowhere to go but up). Testosterone levels are very unstable, we learn. There are seasonal variations well as daily fluctuations, with peak period in the morning. Like cholesterol, there are two types of testosterone, bound and free. The bound type adheres to a protein and is essentially tied up while the free type circulates and energizes important organs. As men age, the bound type increases and the more vital free type decreases. The level of free testosterone is more important that the total level. Testosterone replacement therapy is a controversial area for physicians and the authors do a nice job in listing the pros and cons.

A chapter on sex titled “Manopause Sex, His Penis, And Your Relationship,” which focused on male sexuality in midlife, is also well done and deals with such topics as erectile dysfunction, Viagra and other enhancers, and male health and longevity in relation to sex. The authors cite a Northern Ireland study that found that men with a low frequency of sexual activity (less than once a month) died at twice the rate of men with high-frequency sex (two or more times a week). There is also useful information on the neurophysiology of the midlife penis as well as a brief treatment of the interaction between rising testosterone in midlife women (due to falling levels of estrogen) and falling testosterone in their mates.

A chapter on intimacy with one’s manopause mate is less successful, relying too much on conventional wisdom and cliche. The remaining chapters cover family issues and work. The one on family is pretty much as you would expect: manopausal father in competition with growing sons and being overly protective of growing daughters.

The work chapter is also conventional in content except for a section on how a female employee should handle a manopausal boss. The concluding chapter, “Your New and Improved Manopause Man,” is, as its title suggests, patronizing to men. The authors propose new “mandates” that include such nebulous goals as “Find your authentic self,” “Accept change,” “Become emotionally intelligent,” “Be your healthiest self,” and “Discover deeper meaning and intimacy in relationships.” This tone also belies the subtext of the whole book, which seems to envision a doughty, hardworking female engineer working on a new blueprint for her hapless, befuddled mate.

Still, the book, despite its faults, works very well in presenting a complete picture of the midlife male. It’s very well researched, intelligent in design, and certainly of use to wives coping with manopause, as well as to husbands who are living through the transition. I myself learned a lot from it.

The Importance of Black Barbers as Staples of the Community