Reviews Home » Mastermind: How to Think Like Sherlock Holmes 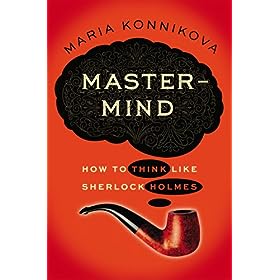 Imagine growing up in a family in which the father reads to his children every night before they go to bed. Now imagine that the stories he reads are those about Sherlock Holmes. Such is Maria Konnikova’s introduction to the celebrated sleuth and subject of her intriguing book, Mastermind: How to Think Like Sherlock Holmes.

Kindred fans of Sir Arthur Conan Doyle’s detective will find themselves deep inside the mind of their beloved protagonist.

Konnikova, a Harvard graduate, is also a doctoral candidate in psychology at Columbia University. She currently writes a column for Scientific American. In Mastermind, she provides a bounty of excerpts from Doyle’s stories along with her own analysis to illustrate the clever ways that Holmes approaches each mystery before him. Through examining Holmes’s thinking, she writes, we will learn “how to apply his methodology to our everyday lives, to be present and mindful and to treat each choice, each problem, each situation with the care it deserves.”

Throughout the book, Konnikova uses the terms “Holmesian” and “Watsonian” to describe two different ways of thinking. Whereas Watson — Holmes’s sidekick in Doyle’s stories — sees, Holmes observes. The former is naive, Konnikova tells us, while the latter is aspirational. Unlike Watson, Holmes pays attention to things that may have been right before Watson’s eyes but that he did not in fact realize because of his failure to look beyond the obvious. Because “our minds love nothing more than jumping to conclusions,” as Watson’s sometimes does, Konnikova says that the goal is to “move from passive absorption to active awareness.”

This transition we want to make from passive to active, the author states, is dependent on what Holmes calls our “brain attic” — its structure (how our minds work) and its contents (things we have absorbed from life, and our experiences). Holmes considers that “a man’s brain originally is like a little empty attic, and you have to stock it with such furniture as you choose.” And though we often think we know certain facts and not others, we can, through observation, imagination, creativity, and education, draw upon our attics when faced with any kind of situation, mystery or not. “At any given moment,” Konnikova explains, “you only think you know what you know. But what you really know is what you can recall.”

Konnikova tells us that mindfulness and meditation are fundamental to thoughtful deduction, which is accomplished through reflection, inhibiting your initial intuition, and editing it accordingly. By isolating facts that are crucial from those that are incidental, we can effectively deduce something, she says. As Holmes puts it, it such deduction is really just “systematized common sense.” This is essentially that last mental look around the attic, when we discover the fact we’re looking for. It’s easy to imagine Holmes having that aha! moment upon realizing he has solved the mystery.

Because Konnikova uses selections from Doyle’s Sherlock Holmes mysteries as the foundation for her book, she includes background information for those readers who are not familiar with the stories. At the end of each chapter of Mastermind, she provides the quotes from Holmes that she has used in that particular chapter, as well as the plot and specific location in the book from which they came. Whether you come to Mastermind with this background already or absorb it only through Konnikova, you might find yourself adapting the author’s terminology. If you’re a fan of TV crime dramas such as NCIS, Criminal Minds, SVU, or Elementary, you may start analyzing whether the show’s characters are using Watsonian or Holmesian thinking.

While reading Mastermind, I was reminded of another recent book: Shlomo Breznitz’s Maximum Brainpower. Specifically, the act of “satisfycing” caught my attention again—the term for when you stop looking for an answer upon arriving at one that is simply “good enough.” Like Breznitz, Konnikova posits that when we multitask, all of the various tasks we’re performing are not done to their full potential. But Konnikova has her own trove of tips worth reading.

“If you get only one thing out of this book, it should be this: the most powerful mind is the quiet mind,” she writes. Mastermind shows us that by quieting the mind, we are then freed to look through the attic’s contents in a way that is productive rather than haphazard. This method serves Holmes well, paving the way for him to correlate pieces of information that may have appeared at the outset to be unrelated, or that may never have been considered in the first place.

Konnikova does a splendid job of illuminating the importance of details and seemingly stray pieces of information. Although many readers of Mastermind may begin the book by finding that their thought process is more like Watson’s, they will come away with the tools to solve problems like Holmes.