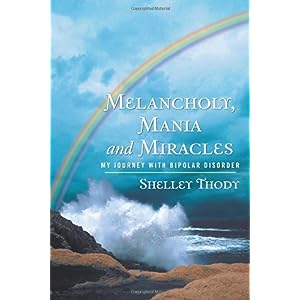 I picked up this book because I have bipolar disorder and I wondered how similar or different her story is to mine. Shortly after the book came in the mail, I had surgery and my best ferret friend died.

This book sat on my desk for five weeks, glaring at me and daring me to read it. I didn’t want to. I was depressed and didn’t want to read about someone else’s troubles. Nevertheless, I finally forced myself to do so, and I’m glad I did. Her up-and-down story has a nice ending and reinforces the idea that there’s hope in perseverance.

First off, Mrs. Thody’s book is not a well-researched treatise on bipolar disorder. It’s not designed to do much in the way of education, and reading it won’t point you to the perfect drug for controlling bipolar disorder.

Instead, Thody designed her book to give hope. Mrs. Thody wants to show that despite problems with bipolar disorder, you can maintain a functional, happy life. She does this with a mini-biography, and she does the job well. If you, or someone you know has bipolar disorder and hasn’t read a lot about the disease, this would be a good first book — it shows that with hope there’s perseverance.

There’s a famous biography of a manic depressive called An Unquiet Mind by Kay Jamison Redfield. (Redfield’s story is good and anyone interested in bipolar disorder should read her book.) Thody’s story doesn’t have as many retrospectively almost-funny stories in it as Kay Jamison Redfield’s story. Thody never bought twelve snakebite kits or anything amusing like that.

I think Thody’s highs were different from Redfield’s. Redfield’s book was a little more amusing; Thody’s is perhaps more relatable to non-bipolar people. (I mean, no one in Los Angeles needs twelve snakebite kits whereas Thody’s renting an apartment that was a little too expensive for her is more relatable. Many people do that and they don’t have mood disorders.)

Thody grew up in Canada and lives in a small town in Canada today. She lived in one house as a child, and her family moved when she was between her junior and senior year of high school. She did a year of college to be a pharmacy technician and then later went to college to be a schoolteacher. She currently teaches elementary school.

Thody had a spell of anorexia in her early teenage years. She makes it clear that she thinks adult females should not obsess about weight in front of young girls. I agree. In fact, on time on the way to my grandfather’s funeral, I chastised my sisters for talking non-stop about their diets in from of my seven-year-old daughter. They apologized, and I think they took that lesson home and are careful around their daughters. I heartily approve of Thody asking people to not obsess about weight and transferring that obsession to young girls.

Sometimes people ask me about bipolar disorder and the associated stuff. A common question is something like, “Do the meds make you not you?” My answer goes like this: When I’m not on my meds, if I stub my toe on the way to the shower, I’ll probably end up going back to bed and crying for two hours and never actually starting the day. When I’m on my meds, I can stub my toe and then let out a few colorful metaphors, take a shower, and get on with life. If the meds are turning me into “not me,” then I’m good with that.

While Thody wasn’t answering the med question, she did show the difference of being in a bad situation with and without the meds. When Thody’s first grandmother died, she was not on meds and depressed. She said, “The news struck me like a bullet in the heart… Why? And most importantly, why not me? I had so little to give this world…”  Thody sort of attempted suicide shortly after her grandmother died and she was not medicated. When her other grandmother died, she was on her medication. Thody says, “I was very sad about this grandma dying, of course, but my life didn’t completely fall apart this time…I was in control. I had my medication, love, and hope in my life.”

In summary, if you are new to bipolar disorder and need some life stories, this is a good story. I had one personal problem with the book that most people won’t have, however. Shelley Thody is rather religious and attributes many of life’s situations to God and Devil. If you’re religious, you’ll probably appreciate that and it might even reaffirm your faith. If you’re agnostic or an atheist, it’s probably a bit over the comfort limit.

Melancholy, Mania, and Miracles: My Journey With Bipolar Disorder