Reviews Home » Mixing Minds: The Power of Relationship in Psychoanalysis and Buddhism 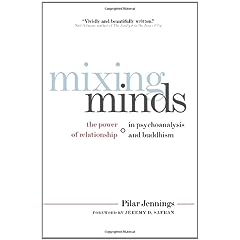 Anyone with even the slightest interest in psychology will have come across the concepts of mindfulness and meditation before. They are mentioned in almost all of the literature in the field, and frequently referred to as an effective way for us to center ourselves, calm ourselves down, and focus on the moment. Indeed, as a marriage and family therapist, I frequently use mindfulness techniques and meditation exercises with many of my clients. But where did these ideas originate, and how compatible are they with Western ideas and psychoanalysis?

In this engaging and informative work, psychotherapist and long-time practicing Buddhist Pilar Jennings aims to answer these questions, explaining how she came to this world of “mixing and matching” healing traditions.  Mixing Minds tackles subjects such as the assumption that one’s spiritual practice addresses the same issues and dynamics that are explored in therapy, the cultural differences in the origins of these two practices, the driving motivation behind the Western exploration of meditation and Buddhist teaching, and some of the potential stumbling blocks along the path of Western Buddhists.

Jennings begins her book by describing her own history with meditation:

“Like many Western Buddhists, I was initially attracted to the experience of meditation and the life-altering insight that one could choose to relate to one’s own mind, including the stormy realm of affect, consciously and with a sense of loving discipline. This primary interest in meditation is one of the central attractions – if not the central attraction – for Western Buddhists.”

This might initially seem like familiar territory to anyone who has studied meditation before – in fact, this idea of differentiating between the different versions of self and relating to one’s own mind reminded me of Eckhart Tolle’s teachings on The Power Of Now – but Jennings goes into much greater depth, exploring the history of Buddhist meditation, and how it has slowly infiltrated Western society, particularly within the field of psychology. While Tolle suggests that pain is an illusion which exists only in our minds, of our own making, Jennings veers toward the idea that it is our pain-phobic society which has conditioned so many of us to fear and avoid pain, when in fact we should learn to embrace it as part of life’s rich tapestry. Mixed Minds looks more closely at some of the possible reasons for the Western world’s shift toward Buddhism, suggesting that many Westerners suffer from a fundamental sense that something is missing from their society’s focus on capitalism and its emphasis on individualism and financial success:

“I found myself considering the pervasive addiction, anxiety, and depression that permeate the urban setting that is my home. Despite our culture’s great material wealth and educational and professional opportunity (albeit unevenly distributed based on race and social location), I have witnessed and experienced remarkable levels of basic unhappiness and distress. This sense of unsatisfactoriness – which the Buddhists called dukkha, a word that evokes the experience of being out of sync, like a wheel out of alignment or an arm out of its socket – strikes me as being something altogether more serious than the high stress levels that are commonly acknowledged by physicians and sociologists. What I have come to discern, both within my Buddhist community and among secular friends and family members, is a near desperation for some systemic manner of relief from a life that can so easily feel devoid of value and meaning.”

Jennings goes on to talk about her own struggle in dealing with this issue, sharing the stories of her depression and anxiety, and her experiences as a client in therapy. It’s these personal insights that make up the most interesting parts of the book, where Jennings shares her own insights, gathered along her journey toward awakening and enlightenment, through both Buddhist teachings and psychoanalysis.

Mixed Minds contains a great deal of information that will fascinate anyone who has an interest in either psychoanalysis or Buddhism, and particularly those who practice either one or both of these. As a practicing therapist, I found one of the book’s most interesting concept to be a section on the “fluidity of self,” in which Jennings highlights the spiritual / universalistic emphasis placed on identity in Buddhist teachings, and contrasts this with the psychological / personal emphasis on the individual that exists in Western culture:

“In my analysis, I was reminded that attachment to the belief in an inherent self left me feeling either fated to a life that lacked the spontaneity and vitality of unexpected discovery, growth, and meaning I wished for, or pressured to fulfill a more desirable destiny as depicted by my analyst. The thought that I was tethered to a future predicated on who I am writ large left me feeling ill at ease and somehow destined for subpar efforts at success. It was not just that the nature of the fantasy was problematic, but that the fantasy was perceived as a fixed reality destined to meet up with a fixed self that I must honor and live up to. However, when I focused on the Buddhist teaching of impermanence, emptiness, and no-self, and on the constantly changing circumstances of a given life, I began slowly to relax back into life, knowing that neither myself, my bleak view of the future, nor my analyst’s sterling fantasy were fixed phenomena. These beliefs, which I had contemplated over many years, helped me to reframe my perception of how life might unfold.”

This is a theme which I am sure will resonate with many of Jennings’ readers, and is certainly something I have dealt with numerous times in the therapy room. Jennings does an excellent job of exploring these various ideas of the self, tracing them back through both Western and Eastern philosophies in order to help us make sense of them and see how we might mix them together.

Through Jennings’s own personal journey in both traditions, she attempts to shed light on how these contrasting approaches to wellness affect our most intimate relationships. Jennings discusses the many radical differences and areas of synergy between Buddhism and psychoanalysis, with a focus on the primary relationships within each system, She explores how each tradition helps us enter into and sustain relationships, and how the core teachings of each tradition come to life by examining how Buddhist teachers relate to their students, and how psychoanalysts relate to their patients. Jennings focuses on these dualities, and on the similarities between the relationships that exists in the therapy room, and the one that exists between the Buddhist teacher and his Western student.

Importantly, Jennings never attempts to convert the reader to Buddhism, and at no point does she suggest that any other faith would be any less suited to therapeutic work. Instead, her writing is lucid and engaging, as she takes an honest and inviting approach to her work, relating personal stories and teachings in order to educate her readers and empower them to make up their own minds. You won’t necessarily come away from this book as a Buddhist, but you will certainly come away feeling more educated, and more equipped to incorporate meditation into your own life or practice, should you wish.

Mixing Minds is one of the finest contemporary books on the dialogue between Buddhism and psychoanalysis, although it may be more attractive to those who already work in this field than to a casual reader. Jennings’s rich discourse examines the strengths and limitations of each discipline, clarifies the way in which they can complement one another, and consequently deepens the reader’s understanding and appreciation of these two great wisdom traditions.

Is She Asperger's Or On The Spectrum? 15 Clues