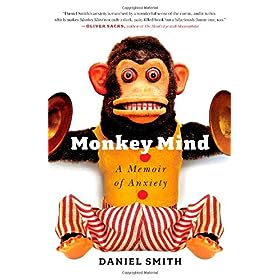 Daniel Smith describes himself as anxiety personified in his absorbing and humorous memoir Monkey Mind. Smith was anxious from birth. Anxiety lurked in his genes. Both his mother and father suffered from severe anxiety: His mother’s anxiety was punctuated by regular panic attacks from her teens to her 30s. His father’s series of panic attacks led to a hospital stay in his 40s. As a child, Smith describes himself as “hypersensitive and neurotic.” He writes, “There are many flavors of anxiety. My childhood was a taster’s menu.”

But his childhood anxieties and compulsions were one thing. As he notes, there was still a chance that he’d transition into adolescence and adulthood without enduring anxiety every day. At 16 years old, however, his anxiety peaked after losing his virginity to a former co-worker, Esther. The sexual encounter turned out to be a traumatic and triggering event. He writes:

“I was as unsettled by Esther as anyone, maybe more so. Later it would be Esther who would call forth the most powerful, private, physical symptom of my anxiety: a stab of sharp cold in the heart-side of my sternum, as if an icicle had been lodged there.”

Throughout the book Smith returns to this metaphor of his anxiety as an icicle. He writes:

“Mine felt like an icicle and today, nearly twenty years later – sitting here alone at my desk, door closed, cut off from the world and all its threats – it still feels like an icicle. It is working away now as I write, dragging itself around my chest. It is still there, it is still real, and I still fear it. I still hate it, yet now with a nagging affection, the way a child feels toward a parent who has abandoned the family. The way you feel toward something that is both part of you and not, maddeningly. The way you feel toward something that has taught you an unfortunate truth, the unfortunate truth: You are not at the wheel.”

Smith’s anxiety, though chronic, isn’t a steady, raging river. It has peaks and valleys. It peaks the first day his parents drop him off at Brandeis University and valleys during his senior year of high school. It peaks, again, post-college with his first job as a fact-checker for The Atlantic and his first serious relationship.

Smith features many interesting insights about anxiety, including his own musings. He draws from the work of psychologists, writers and philosophers, including Soren Kierkegaard and Charles Darwin. For instance, he discusses the difficult task of distinguishing between two very different anxieties:

“The hard work, you discover over the years, is in learning to discern between correct and incorrect anxiety, between the anxiety that’s trying to warn you about a real danger and the anxiety that’s nothing more than a lying, sadistic, unrepentant bully in your head.”

His descriptions of anxiety and panic – which he views as two dramatically different experiences – are spot-on. In the middle of the book he describes the cycle of his anxiety and its various phases. He explains his personal anxiety scale, which goes from zero to 10: “zero being catatonic and ten being the guy in Edvard Munch’s The Scream, where, psychologically speaking, you’re on a bridge surrounded by faceless strangers who are unable or unwilling to help you and the sky is blood-orange red and swirling and hectic and everything is so bleak and awful that you’d rather die than spend another second where you are.”

He registers an 8.3 on the scale when he tries to write a paragraph for Monkey Mind and seems to be doing anything but. A panic attack, he says, however, “is worse than that.” It falls off the scale. When you’re submerged in panic, he writes, you cease being human and turn into “an animal under attack.”

Smith’s memoir is relatable, raw and inspiring. He doesn’t shy away from sharing the unsightly — everything from taping his wife’s maxi-pads to his armpits to soak up profuse sweat to writing an article on electroconvulsive therapy that leads to a lawsuit. Even though Smith’s anxiety is persistent, peaking to unbearable at times, he doesn’t let it stop him from graduating Brandeis with honors, becoming a fact-checker at a prestigious publication, taking on writing assignments in faraway lands and pursuing his freelance career.

Smith “warns” readers that Monkey Mind “is no recovery memoir.” Still, toward the end, he touches on the techniques that help him alleviate his angst. And ultimately, he inspires readers to keep going; not to let their anxiety disrupt their dreams or their goals. While his anxiety is a constant companion — sometimes a close one, other times, an acquaintance — Smith has found a fulfilling life with a family and a productive career.