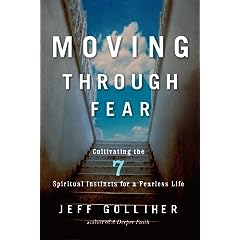 Moving Through Fear: Cultivating the 7 Spiritual Instincts for a Fearless Life

Jeff Golliher, author of Moving Through Fear: Cultivating the 7 Spiritual Instincts for a Fearless Life, is both an Episcopalian priest and a cultural anthropologist, a combination that allows him to address uniquely how fear can rule peoples’ lives as well as what can be done to combat it.  The book uses tenets and lessons of the Christian faith in addition to the author’s personal observations and experiences to walk through seven “spiritual instincts” meant to be tools in the process of becoming free from fear.  If you are Christian or have an interest in how a cultural anthropologist’s interpretation of spirituality can be practically applied in life, Moving Through Fear is an engaging read.

The book begins with a preface detailing the premise of the following chapters: that while some fear is useful, most is a relic of humanity’s primitive days and does not serve us well.  Following this theory, we can then be set free from this useless fear through a love of God and the practice of our “God-given” spiritual instincts.  Chapter 1 furthers these aims, describing more fully the “power and peculiarity of fear,” namely that fear is often inextricably entwined with love, is felt and expressed differently by different people, tends to be “managed” rather than set free, and finally that tension arises when religion is the source of fear—as in, the “fear of God.”  He also categorizes fear based on the three varieties with which people have approached him for guidance:

2) ‘The world is pressing upon me,’ the widely known ‘panic attack’;

3) ‘falling into the abyss,’ the so-called bottomless pit, which is the worst of the three.” p.17

Chapter 2 continues to examine fear through the author’s five insights:

“…we must strengthen our Spirit…cultivating the very spiritual instincts that our fear would have us neglect or ignore.”

“One fear contains the power of every fear within it.”

The following seven chapters describe the spiritual instincts of Moving Through Fear’s title, one per chapter, and all conclude with a Spiritual Practice comprising suggestions for using each instinct in practical ways.  Chapter 3 starts off with “Awe,” defined here as “sensitivity to God’s presence,” be it in church or witnessing a sunset.  Awe has the power to “release the grip that fear has on us” through amazement of the vast, uncontrollable world around us (p.58).  Chapter 4, “Love,” has a similar message that when we release the need to control, the capacity for love increases.

Chapters 5 and 6, “Intent” and “Conscience,” relate to the part of fear that is within our conscious awareness.  Intent gives us the choice to be present in the moment of fear and so recognize when it has overtaken us (this concept is also referred to as “mindfulness” in many comparative works).  Conscience, our moral compass, tells us the right thing to do, the absence of which creates a vacuum for selfishness and fear.  “Community” and “Rest,” Chapters 7 and 8, suggest different ways through fear.  Relationships and recognition that humanity is in a “life together” combats the fear that results from loneliness; and freedom from the fear of doing nothing, noted here as “resting in God,” allows us the stillness that infuses peace (p. 189, 213).

Chapter 9, “Faith,” describes this final instinct as the most important, to be emphasized over all others:

“Faith is our God-given capacity to leap into the unknown.  To make this leap, we can no longer put our faith in the service of fear, or use faith to conceal our fear.” p. 235

The author also connects faith in the chapter-ending Spiritual Practice with all the other instincts to show how they are interrelated and circle back to the overarching importance of faith.

The book closes with an epilogue, “In Defense of Joy,” that wraps up the examination of fear with a description of what a joyous life can be, when fear is not allowed to rule.

When evaluating Moving Through Fear, there are two overall facets of it that must be addressed.  First, it is an inherently Christian book, even as it is described as “spiritual,” and second, it is also very personal.  To the former point, Bible references dot the text and are used both as background and examples.  The assumption has been made that the stories of St. Francis, Jericho, etc. are well-known and that they are accepted as matters of faith.  This is not to say that the book is wrong in doing so, just that it becomes gradually clearer that the intended audience should be of the Christian faith in order to get the most out of it.

To the latter point, the author has peppered the book with personal anecdotes and experiences, using the “I” voice almost exclusively.  This is not done unwittingly, and in fact is quite purposeful: “…I realize that anyone reading this book deserves to know a great deal about me as a person” (p. 14).  It does, however, make it harder to relate to than, say, Eckhart Tolle’s works on spiritual matters, in which he uses general fables and naturalistic examples that are more widely understood and easier to relate to.

Keeping those overall impressions in mind, then, Moving Through Fear is still a very insightful work, full of apt observations of the nature and effects of fear on the unaware person:

“Fear also has superb skills in the art of misdirection and distraction.  It will do anything and everything to turn our attention toward itself (that is to say, toward its power), and with equal cunning, away from itself, when denial serves its purpose.” p. 30

The author also uses a broad variety of settings and examples to combat the personal nature of his writing, with a modicum of success.  Bringing in NASCAR, Robert Oppenheimer, chicken farming in the South, and the Oracle of Delphi (to name a few) into one book is impressive.  It shows this reader what the author’s experience as a cultural anthropologist has brought to the table.  He rounds out a practical element of the work, too, by ending each chapter with useful and valuable suggestions on how to use that particular spiritual instinct as well as supplying a list of references and further reading to finish the book.

To conclude, while Moving Through Fear has a specific way of addressing its intended Christian audience, its central message is one from which we all can benefit:

“…we do not reach a point in our lives when we become completely free from fear, nor should we ever believe we can.  The issue is not whether we have fears, but whether we’re willing to find it within ourselves to move through them…” p. 164

Moving Through Fear: Cultivating the 7 Spiritual Instincts for a Fearless Life