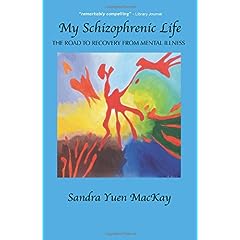 My Schizophrenic Life: The Road to Recovery from Mental Illness

Schizophrenia affects one percent of the world population.  It is indiscriminate of race, gender, status, and wealth.  Contrary to popular belief, schizophrenia is not multiple personalities — that’s Dissociative Identity Disorder (formerly Multiple Personality Disorder).  The disease, instead, makes it impossible for its victim to tell the difference between what is real and what is fantasy.

Sandra Yuen MacKay’s 2010 memoir, My Schizophrenic Life: The Road to Recovery from Mental Illness, is the heartwarming story of how she learned to participate in normal life after her break from reality.  Although the author chose not to use a ghostwriter, the book is still wonderfully written.  Seeing the author’s own words on the page makes the story feel much more personal.  I would definitely recommend this book to anyone who wants to know what it’s like to suffer from schizophrenia or schizoaffective disorder.

Sandra Yuen MacKay was born in 1965 to an Asian family in Vancouver, British Columbia, Canada.  From an early age, she showed signs that something wasn’t right with her brain.  As she walked to school, she would often smell vinegar and hear a dog barking.  Eventually, paranoia set in.  MacKay often believed that people from her school were spying on her; she could hear them talk about her when they were looking through her window at night.  MacKay’s family admitted her to the hospital after she painted a message to her hallucinations on her front porch—her father believed the message was targeted to him.  As MacKay grew older, her delusions would come and go.  When her medications gave her intolerably severe side effects, her psychiatrist lowered the dose; when the delusions returned, the psychiatrist increased the dose again.  Her recurring symptoms made it very difficult for MacKay to hold a job, though her father kept a receptionist position open for when she needed work.

Although this is a book about schizophrenia, it is also a book about Sandra Yuen MacKay’s life.  As with all our lives, there are plots and subplots.  The main plot of this story is at the very heart of the book—MacKay’s recovery from schizophrenia—but the book also serves as a love story.  There are two loves in the author’s life: art and her husband, Greg.  MacKay earned her degree in art history, and during her break with reality attended several art classes to aid her recovery.  Making art was a way for her to control her delusions.

Overall, My Schizophrenic Life achieved its goal.  I knew very little about what it was like to be schizophrenic before reading the book; I only had a small understanding from movies such as A Beautiful Mind and The Soloist.  The book, much like MacKay’s artwork, paints a vivid picture of what it is like to have schizophrenia.  Although she was not willingly hospitalized, the reader gets a sense that the author wanted help.  The inspiring passages all lend a sense of hope, even when the author tells of her hopelessness and despair.

MacKay tells of several ways she tried to treat her schizophrenia (later diagnosed as schizoaffective disorder).  Inpatient treatment at mental hospitals, medication, and monthly therapy sessions seemed to help control her symptoms.  Nevertheless, I think her dedication to art was what helped her the most.  Art gave MacKay an outlet for her frustrations; it gave her a medium in which she could exhibit her delusions.  I believe MacKay used her art in the same way that I use writing and music: to escape both reality and her mind.

Something that I have yet to see in the literary world is a story about recovering from mental illness without therapy and without medication.  This book suggests that the only way to recover is to be treated medically.  I admit that it was in MacKay’s best interest to have her illness treated properly.  I just think that it would be greatly inspiring to read a book about someone who beat illness without professional help or medication.  Though I am happy for the success Mrs. MacKay has had in treating her illness, my only reservation with this book is that it implies that the only way to get better is to seek professional help.  I can’t agree with that position.

In conclusion, Sandra Yuen MacKay’s My Schizophrenic Life: The Road to Recovery from Mental Illness was a brilliant and inspiring read.  MacKay makes the reader believe that if she can recover from mental illness, anyone can.  Reading this book gave me a sense of hope, as well as opened my mind to a new understanding of a misunderstood illness.  I definitely recommend this book to anyone who wants to know what it’s like to have schizophrenia or who just wants to enjoy an inspiring story of great personal recovery.

My Schizophrenic Life: The Road To Recovery from Mental Illness

My Schizophrenic Life: The Road to Recovery from Mental Illness

4 Steps to Consciously Free Yourself From the Grip of Fear