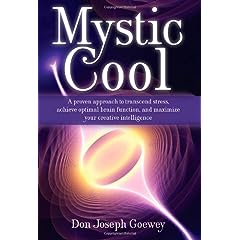 Don J. Goewey subtitles his book “a proven approach to transcend stress, achieve optimal brain function, and maximize your creative intelligence.” However, a more appropriate choice may have been “the missing owner’s manual for your mind.”

Mystic Cool borrows heavily from Eastern wisdom, Western science and medicine to paint a vivid picture of the human brain and how to achieve optimal function. Goewey does an excellent job of avoiding medical jargon while describing the various regions of the brain and their functions, and mixes in a variety of anecdotes that keep potentially dry material fresh, interesting, and personal for the reader. The book is clearly geared toward those suffering from stress or anxiety; however, it would be a compelling — possibly revolutionary– read for even the well-adjusted set.

One of the book’s greatest strengths is that Goewey never falls into the trap of so many self-help books: attempting to convince the reader his point of view is correct. Goewey simply appeals to readers’ personal experience. When he describes stress as a storm leaving our brains “in dissonance, toxic with stress hormones and incapable of higher intelligence” it resonates because it matches our experience. Similarly, when he describes a method for finding a way to live inside the eye of the storm, he doesn’t ask us for faith. Instead, he gives us clear procedures we can follow to test his ideas for ourselves. In short, he relies on the reader to convince himself.

Mindfulness, the primary tool Goewey employs, is no psychological or scientific breakthrough. Most readers will likely recognize it as the primary component of Buddhism, Taoism, and most other Eastern philosophies. However, his infusion of scientific explanation into mindfulness practice may be helpful in winning over skeptical Westerners. For instance, he cites one study that found that “when the left prefrontal cortex sustained substantially higher activity than in the right, people reported feeling content, energetic, engaged, and joyful.” He then shares the story of a group of Tibetan monks who were very advanced practitioners of mindfulness meditation. “Activity in the prefrontal cortex … swamped activity in the right prefrontal cortex … something never before seen from purely mental activity.”

A skeptical reader may think “I’m not a Tibetan monk. Mindfulness practice can’t have a significant effect on my life.” Goewey, seemingly in anticipation of this argument, takes an entire chapter to explain the science of how “the neuroplasticity of practice” means that we do, indeed, have the power to change habitual and detrimental ways of thinking into more positive and beneficial ones. This chapter, in some ways the most powerful, is something of a scientific pep talk. “Practice,” he writes, “is the discipline that shifts the outcome of what we don’t want to the outcome of what we do want.” Later, he adds “The adage that you can’t teach an old dog new tricks does not apply to the brain. The brain is quick to organize around changes we want to effect, when we practice the change with consistency.”

Although on the whole the book is an enjoyable read, it does suffer from a few flaws. Most notably is Goewey’s “pantheon of the brain.” Perhaps in an effort to make the neural anatomy and function more accessible to the layman, he chooses to compare the neocortex, the brain stem, and the “emotional brain” to gods and creatures from myth. The neocortex becomes Apollo; the brain stem is the Dragon; and the emotional brain is Mars. An uneducated reader would likely have discarded the book before finishing the prologue, so why he felt the need to use these metaphors when addressing an educated audience is unclear. In some ways, it seems almost condescending. In the early chapters it actually obfuscates points that otherwise may have been clear had he just used the proper names. When he would discuss the interplay between Apollo, Mars, and the Dragon, I often found myself flipping back to remember which parts of the brain he was referring to. Luckily, the second half of the book is almost completely devoid of this “pantheon” and flows much better.

Having had an interest in Buddhism myself for many years, I found this book to essentially be a scientific justification for mindfulness practice. An avid follower of either Eastern thought or cognitive science would likely have found this volume simply a review of familiar mental practice techniques. However, that does not negate its veracity or usefulness. To those not familiar with the science and philosophy contained in Mystic Cool it may be quite powerful to discover. Even for those of us with previous experience, this book serves as a reminder of why the practice is important, and lends scientific credibility that is often so important to Westerners. The exercises Goewey recommends to address stress are simple, practical, easy to follow, and, most importantly, effective. The book could be a valuable tool for anyone suffering from stress, or anyone simply looking for to fine tune their understanding of their own mind.