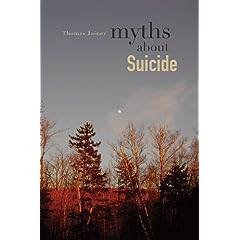 In May 2007 a young woman in Oklahoma died of a gunshot wound to the head. Whether it was self-inflicted or not was not apparent. Her family hoped to prove that it wasn’t self-inflicted and wanted the insurance company to pay death benefits. The judge ruled in favor of the family, stating that the insurance company’s attorney didn’t substantiate the suicide claim. The family’s lawyer responded by saying: “It wasn’t about the money…[it’s standard for insurance companies to pay benefits anyway as long as the death occurred over two years after the policy was started]… This is about clearing a daughter’s name of the stigma of having committed suicide.”

Sadly, the incident and the attorney’s words are a prime example of how suicide is viewed in our society. Indeed, on the first page of the book, Joiner refers to suicide as “the most stigmatized of human behaviors,” well above slavery and slaughter.

Joiner divides Myths About Suicide into three sections: the suicidal mind; suicidal behavior; and causes, consequences and subpopulations. Each section features about eight or nine myths or misperceived topics, which Joiner then goes on to debunk. It’s safe to say that everything you’ve learned about suicide is probably an exaggeration or misconception at best or downright fiction at worst. No doubt readers will find this book eye-opening, interesting and enlightening.

Joiner discredits everything from suicide being an easy escape or an act of aggression or revenge to most people leaving a note or committing suicide on a whim to being able to tell that a person will commit suicide by how they look. He debunks these myths by using historical anecdotes, news accounts and scientific research to give readers the most accurate and up-to-date information on suicide.

Joiner also outlines his well-researched theory of suicidal behavior. He posits that death by suicide is a combination of three risk factors: fearlessness about pain and death, which people may develop through self-injury; the perceived belief that they’re a burden on their friends, family or society; and the feeling that they don’t belong (i.e., lack of connection with others).

As mentioned above, suicide is highly stigmatized. It has been throughout centuries. As Joiner writes, stigma also encompasses “…disgust, contempt and lack of compassion, all of which flow from ignorance.” Not only does this punish families of loved ones who’ve committed suicide—by being misconstrued as an easy, weak, selfish and sinful act—but the scary thing about stigma is that it also hinders prevention efforts.

One of the biggest and most damaging myths is that “if people want to die by suicide, we can’t stop them.” Joiner gives the example of the Golden Gate Bridge, which was built in 1937. Since then, about 1,300 people have died by jumping off the bridge. In 2006 alone, over 30 people died. (Joiner points out that this number is probably higher since some people’s bodies aren’t recovered and some deaths go unwitnessed.) In refuting this myth, Joiner notes that many people have dismissed the necessity of a bridge barrier, which he and others find outrageous. He writes:

“…this is a moral outrage, one that I and many others believe would never happen for any other public health problem—only suicide could be stigmatized and thus misunderstood to the extent that thirty people’s deaths are ignored year in and year out. The data on this are in, they have been in for around thirty years or more, and they could not be clearer—the vast majority of those who intend to jump from the Golden Gate Bridge but are restrained from doing so go on to lead productive lives.” (p. 150)

In fact, here’s some of the convincing data: In his seminal 1978 study, Richard Seiden compared data on 515 people who were restrained from jumping off the Golden Gate Bridge to 184 people who were taken to the ER after attempting suicide by other means. The results were staggering. About 95 percent of the people restrained on the bridge were still alive at the time of the study, some living for decades after their restraint, or had died of natural causes.

Plus, they had characteristics that made them more likely to commit suicide by other means than the other group: They chose a lethal method, were mainly male (thereby more likely to die; “in the United States, for every woman who dies by suicide, four men do”) and were seldom referred to mental health treatment. So as Joiner summarizes, “95 percent who were on the precipice but were restrained did not ‘go elsewhere’…Restraint demonstrably saved hundreds of lives.”

Joiner uses the analogy of a heart attack or stroke. As he writes, what if “the public policy was essentially, ‘Why bother intervening? They’ll just have another [heart attack or stroke].’…If you really try to imagine this scenario, then you will have walked at least a foot or two in the shoes of family members who have lost someone to suicide.” (A suicide barrier is being built, but initially many opposed it because of money and aesthetics, if you could believe it. As Joiner writes, these are appalling enough reasons but the real problem is “ignorance and prejudice.”)

Myths About Suicide is a significant contribution to the field. It astutely and scientifically debunks the most pervasive myths surrounding suicide, shattering stereotypes and providing the facts on a terribly misunderstood and stigmatized subject. Joiner also has created a compassionate, convincing and searingly honest book. It’s a must-read for anyone who wants to have an accurate and deeper understanding of suicide — especially individuals who work in mental health. Joiner’s concluding poignant and powerful words say it all:

“We need to get it into our heads that suicide is not easy, painless, cowardly, selfish, vengeful, self-masterful or rash; that it is not caused by breast augmentation, medicines, ‘slow’ methods like smoking or anorexia, or as some psychoanalysts thought, things like masturbation; that it is partly genetic and influenced by mental disorders, themselves often agonizing; and that it is preventable (e.g., through means of restriction like bridge barriers) and treatable (talk about suicide is not cheap and should occasion treatment referral). And once we get all that in our heads at last, we need to let it lead our hearts.” (p. 272)