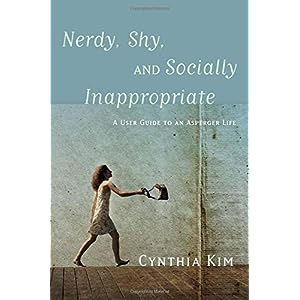 After reading Cynthia Kim’s account of growing up on the autism spectrum without knowing it, I would add “painfully honest” to the subtitle of her book.

Which, I might further add, makes her story even better.

As a child Kim knew she was different from other kids. She waited to grow out of the shyness and awkwardness, but those traits never dissipated. What happened instead was an Asperger’s diagnosis at age forty-two.

I first read Kim’s work on her blog, Musings of an Aspie. One of the pieces that still stands out is called “I Am Not Temple Grandin.” Because people often associate autism with the famed work of Grandin — or with the movie Rain Man — Kim’s relief at finally having an explanation was accompanied by something less pleasant: being the target of stereotyping. Many, she explains, automatically think, Ah, you are on the spectrum, you must be a savant of some kind. But everyone is different, Kim writes, and she is not necessarily what popular culture dictates.

In fact, while reading Kim’s book you may find yourself saying, “I do that, too — I have that quality.” The behaviors and characteristics of autism truly are on a continuum. Just because you share one does not make you autistic; likewise, just because you are autistic doesn’t mean you’re the same as everyone else who is, either.

“As I’ve gotten to know other autistic adults,” Kim writes,“I’ve come to realize that we have much in common and we are as diverse as any other group of people. There are few traits that are universal, which makes it hard to write a definitive book about life on the spectrum.”

Despite the difficulty of defining autism in a universal way, Kim has written a compelling book. She recalls herself as the odd kid who hangs out with the “different” crowd. She is bullied — and, to her regret, becomes a bully at one point, too. Although she has intense interests, she has trouble communicating. She is clumsy and doesn’t do well in team sports, but finds a niche in individual sports. Karate, she learns, allows her to be treated with respect. She starts her own business at age nineteen, and later marries and has a child. She does a remarkable job of adapting to a world that is in many ways incomprehensible and foreign.

In her thirties Kim returns to college, and it is her experience there, as well as hearing a radio story about Asperger’s, that helps her put the pieces together. She writes that her diagnosis was empowering and freeing as well as limiting and stigmatizing. She struggled with accepting it.

I’ve read Kim’s book twice now, and I find it hard to do justice to the breadth it covers. Kim is fearless in her disclosure of the issues she has faced being “outside the norm” in this life. She manages to weave her memoir together with informational guides on things like parenting, eye contact, phone use, dealing with meltdowns, and executive functioning.

She also discusses alexithymia in depth: the condition of not being able to have words for one’s own emotions. That discussion made me think of how common it is for therapists to ask, “And how does that make you feel?” It has become a clichéd line in mental health work. When someone says they don’t know, how often are they seen as in denial, or resistant? There are times that someone legitimately just doesn’t know. For that alone, I wish all therapists would read Kim’s book.

Those who have someone in their life who is on the spectrum (or may be on the spectrum) will also find this text an excellent resource. Kim writes extensively of her relationships with her parents, her daughter, and her husband. Need for control, rigidity, perfectionism, shame, and problems with executive functioning can and do wreak havoc in relationships. Kim takes us through those struggles with touchingly stark honesty. Struggles or not, the love her family has for each other shines throughout.

Overall, the book provides an excellent combination: a tale of discovery and growth, as well as a wealth of information about living on the spectrum. Kim is able to see the positive in her Asperger’s, including how some of her abilities help her adapt to the rest of the world. Not everyone is able to frame behaviors as positive strengths — and some of those strengths, like nonlinear thinking, can earn a person other diagnoses. I have found that true with clients who come to me, often undiagnosed in terms of the spectrum yet with a long list of other diagnoses: OCD, ADD, ADHD, bipolar, to name a few.

With Kim, one “autistic superpower,” as she calls it, is an unconventional sense of humor. It comes through in her writing, and makes reading her that much more enjoyable. Hopefully her work can help us reframe the way we think about certain behaviors — to pathologize them less and to start seeing them more as strengths.

Nerdy, Shy, and Socially Inappropriate: A User Guide to an Asperger Life