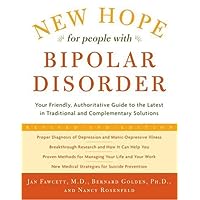 Your Friendly, Authoritative Guide to the Latest in Traditional and Complementary Solutions

Sometimes a book with multiple authors can be a train wreck. This is not one of those books, as each author brings a unique and valuable perspective to helping people understand bipolar disorder, a disorder that as it gains more press attention, also gains a lot more misconceptions.

Jan Fawcett is a renowned psychiatrist and psychopharmacologist, a professional you’d love to have access to for any mental disorder’s treatment. He was one of the founders of the Depression and Bipolar Support Alliance and writes for the book chapters on the details of diagnosis, biology and psychiatric treatment of bipolar disorder, medical strategies and risk factors for suicide. Bernard Golden is a psychologist and was an associate professor at the Illinois School of Professional Psychology. He focuses on the stigma of mental illness, living with others with bipolar disorder, cognitive psychotherapy, and the chapter on optimism and hope. Nancy Rosenfeld brings the book a first-person perspective as someone who has had to deal with bipolar disorder in her own life. Together the three of them write a comprehensive, everything-you- ever-wanted- to-know-about bipolar disorder book.

The book starts out with many vignettes of famous people who’ve had to grapple with bipolar disorder and depression, some of whom are interviewed for the book.

The biology of bipolar disorder chapter gets into the details of what we know and don’t know about the etiology of the disorder. It’s not light reading and what you come away with after reading this chapter is that we seem to know less than what we do know. Twin, adoption and epidemiological studies suggest that bipolar disorder has a strong genetic component or influence. But this component is very complex and it’s likely that the genes contributing to someone being diagnosed with bipolar disorder are numerous, with each contributing only a small effect.

The risk for a child of both parents with bipolar disorder goes up to 50 to 75 percent, depending upon many other factors as well. Eye-opening statistics that implicate the importance of genetic models of causation for bipolar disorder.

In the next few chapters, Medication Therapy and Psychotherapy, the reader gets a run-down of all the various medications used to treat bipolar disorder and its depressive and manic moods. The Psychotherapy chapter focuses mainly on cognitive-behavioral therapy, the mainstay of many modern therapists’ approach to bipolar disorder, and touches briefly upon coping-skills therapy and problem-solving therapy. Helpfully, another chapter entitled, Evolving Forms of Psychotherapy touch upon other successful treatments for bipolar disorder and include behavioral activation therapy, acceptance and commitment therapy, dialectical behavioral therapy, cognitive behavioral analysis systems of psychotherapy, interpersonal and social rhythm therapy, and mindfulness-based cognitive therapy. Wow, that’s a mouthful. Luckily the author handles each of these approaches with aplomb and describes them sufficiently void of psycho-babble that you don’t get lost in understanding how they are helpful with bipolar disorder.

The authors do something that a lot of professionals don’t do and that is to emphasize the complementary nature of medications and psychotherapy working together, hand-in-hand. Psychotherapy helps with a lot of psychological, social, suicidal ideation, and medication compliance issues that medication can’t touch. Medication helps by evening out a person’s mood so that they no longer experience the extreme highs and lows typical of people living with bipolar disorder. The two combined are usually far more effective than either one by itself, and this is a powerful message so often lost in the rush to treat bipolar disorder.

The chapters on Stigma, Optimism and Hope, and Self-Help could be written for any book, and are likely beneficial for anyone grappling with any mental disorder (although the examples are bipolar and depression oriented).

A Special Concern: Childhood/Adolescent Bipolar Illness chapter is biased as one would expect it to be in this kind of book, declaring that bipolar disorder exists in very young children (with helpful vignettes, not scientific case studies, describing children as young as 1 or 2 having this disorder). The authors make no note of how controversial this topic is, and how much disagreement there is amongst mental health professionals on whether “childhood bipolar disorder” is a legitimate, research-driven diagnosis (especially at very, very young ages). They gloss right over these problems, including the fact that there are no agreed-upon definitions for such a diagnosis. This wouldn’t be so concerning except that the authors are adamant elsewhere about the need for the reader to be skeptical about authors pushing their own point of view:

Anyone can write anything they happen to believe and publish it in a book. Most effective treatments [and diagnostic criteria – Ed.] have been verified in scientific reports published in peer-reviewed medical [and social science – Ed.] journals (p. 310).

While there are some sparse research references in this chapter, it’s what the authors don’t say that deprives the reader of valuable context. Bipolar disorder diagnosis in children is a controversial topic, diagnoses of mental disorders in any children under the age of 5 are subject to intense debate, and that prescribing powerful atypical antipsychotic medications is not approved by the FDA in children. All of which the authors fail to mention.

Also what failed to make it into the section about prescribing medications to children is discussing which ones have been approved by the FDA for child use, and which ones have not been. Such information would be invaluable to parents trying to make informed decisions about their child’s treatment choices. Why the authors didn’t feel such information would be helpful or relevant is beyond me. FDA approval is there for a reason — to protect children.

Notice, too, how the authors assert their own subtle bias, by switching to the term “Illness” to describe this issue when talking about children, not the term “disorder” they used in every other chapter title? By suggesting it is simply an “illness” like the measles or the flu, medicating very young children is acceptable and mainstream. There are many professionals and parents who would strongly disagree with this assertion.

The book gets back on track with its Living with Bipolar Disorder chapter, helping people understanding how best to help those loved ones in their lives with this disorder. Compassion, Self-compassion and Bipolar Disorder gives some practical advice about understanding how we have to give ourselves a break with living with such a diagnosis. The chapter on support groups provides a strong rationale for seeking out and joining a local support group that offers a person some emotional support in dealing with bipolar disorder.

The book ends with a frequently asked questions chapter, bibliography and reference sections, as well as a listing of non-profits that offer information related to bipolar disorder and mental health issues in general.

Dislikes of the Book

This book is a strong entry into the market for people looking for a simple guide to everything they ever wanted to know about bipolar disorder. But it has some weaknesses as well, none of which are significant nor detract from the overall usefulness of this text.

I’m not a big fan of professionals who make pronouncements such as, “Psychotherapies are relatively untested in bipolar disorder.” Relative to what? Untested how? When I hear such statements, I have to wonder if the author of the statement has ever looked at the systematic reviews done on the topic. For instance, Zaretsky et. al. (2007) found over 50 studies from 1999 onwards that examined the effects of psychotherapy on bipolar disorder. The researchers discovered that cognitive-behavioral therapy, family-focused therapy and psychoeducation off the most robust efficacy in regard to relapse prevention, the most serious issue for people with bipolar disorder after being prescribed their medication. The literature is filled with effective psychotherapy treatments for bipolar disorder, and the author goes on to acknowledge this in the rest of that section in the chapter entitled “Medication Therapy.”

The entire chapter on Support Groups prominently mentions DBSA’s and NAMI’s efforts in real-world support groups, but makes no mention of Internet support groups for bipolar disorder. There are far, far more people using Internet support groups than their real-world counterparts, so how this entire modality was left out is beyond me. The only time the Internet is mentioned in this chapter is under the heading “CONSUMER BEWARE!” I find that kind of scare tactic less-than-helpful, especially for the hundreds of thousands of people who have nowhere to turn to but online.

I’m disappointed whenever I see the words ECT mentioned anywhere near the term “child.” While acknowledging that ECT is rarely used in children, the fact they suggest this might be an effective treatment option is just ghastly. No long-term studies have been done on children who’ve undergone ECT treatments to understand what they 10-, 20-, or 30-year effects of providing electrical current to a developing brain might be. Until they are done, ECT should never be considered a treatment options for children.

This second edition of the book has also failed to update some areas that call out for one. For instance, on page 173, the authors mention a “recently” launched mental health campaign to reduce stigma from 2000 that was to run five years. Well, it’s now 2007, two years after the campaign ran, and the paragraph hasn’t been updated or said what effects the campaign actually had. It’s all fine and good to spend millions of dollars to help educate and reduce the stigma of mental illness in society, but what are the outcome data on such campaigns? How effective are they? Will these be repeated by others in the future?

Overall, I feel these positives of this book, as long as you understand where the authors’ own biases are, outweigh its drawbacks. The authors have taken the time to combine their years of experience, knowledge, and research to write a very good book on bipolar disorder. If you or a loved one is dealing with bipolar disorder, this book is worth the read and your time.