Reviews Home » Non-Judgment Day is Coming: Are You Ready? 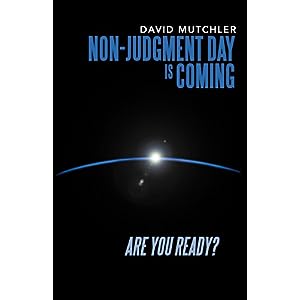 With the spread of technology and social media, people are becoming aware of travesties and tragedies almost immediately after they take place. And so, there are plenty of theories as to what we can do to “fix” the problems that seem to plague our society and the world at large. The ideas range from gun control to mental health advocacy, and from spreading a global religion to redesigning democracy.

For his part, author David Mutchler has written a book that explains how he thinks we can better our personal lives and the world. His ideas center on using the Bible as a series of symbolic lessons about ego, and on changing the way we speak about judgment. Unfortunately, the second half of his book just doesn’t add up.

Mutchler has studied education, philosophy, psychology, social work, and religion. With all of this knowledge, he writes, he came to realize that his own personal life was troubled and that he wanted a richer experience of joy and peace. He began looking at the true impact of ego on personal lives and its ripple effect on others. In Non-Judgment Day is Coming: Are You Ready, he starts off with biblical theories about the ego and Eve, then meanders into unhelpful territory.

The book opens with a discussion on Christianity and the validity of the Bible. Mutchler examines inconsistencies and contradictions found within the text, particularly focusing on the Old Testament. For instance, he points out that in the Book of Genesis, God is referred to in the plural form (Gen 1:26) but then referred to in the singular in the next verse (Gen 1:27). He also discusses what he calls the “dark side” of Christianity, and reviews some of the atrocities that have been committed by those in the Christian faith. As he puts it, “the ego-based judgments made by Christians toward others, both within the faith and outside it, have been the source of an unending chain of atrocities and suffering, large and small, throughout the centuries.”

He encourages us to read the Bible as not a literal work but as a metaphorical one. With this in mind, the understanding is that the serpent in the Garden of Eden is not a real serpent or Satan, but that it represents the ego. Mutchler explains that at birth we all are filled with “Spirit,” but at some point in life we fall from what he calls the “state of Pure Consciousness.” We enter into the world of ego, which is rampant with judgment, suffering, and chaos.

Mutchler’s prescription is a simple practice; it involves accepting the ego’s presence. Rather than push it away or fight it, he says, we can accept it in our lives and thereby release ourselves from its grips. He suggests using the phrase “I am aware that…” to call attention to the ego’s presence. For instance, we might say, “I am aware that ego is trying to make me feel afraid.” By using this language, he suggests that the presence and the strength of ego are reduced.

This part is fine by me, and gets into the practice of mindfulness. But it was the rest of the book that I found troublesome to follow. Mutchler’s description of the “non-judgment world” that would be created were everyone to follow his various tips is at times too sugary-sweet for me to swallow.

For instance, he proposes that rather than saying something is “good” or “bad,” people use the terms “acceptable” or “unacceptable” — and that somehow this can remove judgment from a scenario. I disagree. Deeming something or someone as “acceptable” or “unacceptable” is still providing a judgment, just with different words. Mutchler describes a story in which a judge tells a husband that his behavior is “unacceptable” and that, because of it, he is not to contact his wife for a period of time. The author claims that by stating his ruling in this manner, the judge “offered no criticism or blame.”

Perhaps there was no blame, but how was there no criticism? Mutchler goes on to describe how his simple practice would affect various aspects of life: self-talk, prejudices, and one-upmanship. He rounds out his discussion with what a world without judgment would look like in religion, politics, the military, etc. Now, at heart, I’m an idealist, and I embrace the idea of a world of tolerance, love, and compassion. Yet there is something bothersome about Mutchler’s take.

Depending on the reader, different parts of Mutchler’s book may appeal or alienate. Whereas some Christians may find the first part difficult to read, considering its challenges to literal interpretations of the Bible, I found the first part to be very inspiring. The discussion of the Bible as a myth opens one to the potential lessons and morals that can be found among its tales. And the technique of examining one’s ego is quite useful.

But it is when Mutchler expands from looking into the self to looking at his idea of the “non-judgment” world that I become rather lost. It seemed for the second half of the book that the author was talking in circles, and I became frustrated with the lack of direction and the redundancy. I would have liked a greater expansion on his thoughts about the ego on a personal level.

The book carries valid points, yet it gets lost in overly-idealistic ideas in which it is easy to poke holes. Perhaps I have grown cynical. However, I think readers would be better served reading other works, such as one that Mutchler himself says he was inspired to expand upon: Eckhart Tolle’s A New Earth.