Reviews Home » Not by Chance Alone: My Life as a Social Psychologist 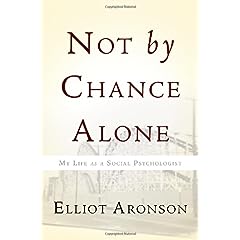 Not by Chance Alone: My Life as a Social Psychologist

How does a shy, uninteresting kid from the slums of Boston become one of the world’s greatest social psychologists? As the title of Elliot Aronson’s autobiography, Not By Chance Alone: My Life as a Social Psychologist suggests, luck is not the whole story.

While luck certainly was on Aronson’s side early in his career — as a student, Aronson worked with Abraham Maslow, David McClelland, and Leon Festinger — he had to work to transcend his origins. So when Brandeis University pulled his scholarship after his freshman year, Aronson didn’t listen to his family when they said he wasn’t cut out for college. He slept in the back seat of whatever unlocked parked car he could find. And when Aronson met the woman of his dreams he didn’t think about how the son of a gambling alcoholic could become a good father. He devoted his life to being a loving father to his own children.

Elliot Aronson was born in 1932 in a slum city outside Boston. In 1935, at the height of the Great Depression, Aronson’s father lost his business and descended into alcoholism. The Aronson family lived in extreme poverty until well after most Americans recovered from the Great Depression.

Aronson discovered psychology at Brandeis University during his sophomore year when he walked an attractive girl to a class taught by Abraham Maslow. Enthralled by Maslow’s discussion of the psychological aspects of racial and ethnic prejudice, Aronson switched his major from economics to psychology.

Maslow mentored Aronson until he received his bachelor’s degree from Brandeis in 1954. Aronson was intrigued by Maslow’s humanistic approach to human nature and motivation. But it was Maslow’s concept of self-actualization that resonated with Aronson:

Many of [Maslow’s] lessons stayed with me for the rest of my life, and of these the most important was his optimistic orientation toward human beings and their potential to grow, learn, improve…That optimism got into the very marrow of my bones. From Maslow, I acquired the determination to apply psychological wisdom and knowledge toward the betterment of the human condition.

What makes Not by Chance Alone unique is Aronson’s talent as a storyteller. Aronson doesn’t just tell the reader that the Great Depression, World War II, the McCarthy witch hunts, the civil rights movement, and decades of breakthroughs in the field of social psychology left a deep impression on him. He crafts dozens of stories that are as rich in imagery as they are in substance.

Recalling a job he had as a young kid in Revere, Mass., Aronson tells the story of the day he became a mike man.

One cold and rainy night, with hardly any patrons on the boardwalk, the mike man at the Pokerino tables stepped down from his perch and asked me if I wanted to take over until closing time. This was fantasy come true. I had been observing him, listening to his spiel over and over until I had it memorized. I even found ways to improve upon it, while rehearsing for hours in front of a mirror. So when he gave me chance, I was ready…

Aronson weaves stories from his personal life with his professional one until the two are inextricably intertwined. Remembering the time that his son Hal broke a baseball trophy, Aronson says:

[The baseball trophy was] the first thing I had ever won, the first time my talent at anything had been recognized. I cherished that trophy. Kneeling by my son, I turned its broken pieces around and around in my hands and seriously thought about having it repaired. Then I grinned at Hal, stroked his head, ‘You are absolutely right. It did break all by itself. It’s not your fault.’ I stood up and, with a sigh, dumped the pieces of the trophy in the trash, realizing, at long last, that I didn’t need it anymore.

These stories resonate the most with the reader because they show the eminent social psychologist as fundamentally human. But they also show how Elliot Aronson is as much a subject of social psychology as he is a scientist. Aronson proved that he didn’t have to be the shy, untalented kid from the slums by changing his environment and his mindset. And he used his personal experience to devise a kind of experimentation that is so real that participants respond in a lab as they would outside it.

The stories about Aronson’s professional life are of undeniable interest to readers with a professional interest in social psychology. His stories about Maslow, McClelland, and Festinger give the reader a unique opportunity to watch great minds interact. But they also provide an unprecedented glimpse into what those great minds were like—a charismatic man [Abraham Maslow] who “spoke softly and thoughtfully, frequently pausing for several seconds in the middle of a sentence,” a generous man [David McClelland] who “always seemed pleasantly surprised whenever we [Aronson and his colleagues] entered his office with a completed task in hand, and a prick [Leon Festinger] who “put a high premium on his own time and energy.”

If there is anything missing from Elliot Aronson’s autobiography, it is the promise of a sequel. Perhaps some stories from the cutting room floor.

Not by Chance Alone: My Life As a Social Psychologist

Not by Chance Alone: My Life as a Social Psychologist

APA Reference
Hintze, C. (2016). Not by Chance Alone: My Life as a Social Psychologist. Psych Central. Retrieved on July 11, 2020, from https://psychcentralreviews.com/2016/not-by-chance-alone-my-life-as-a-social-psychologist/