Reviews Home » Disorders » Sleep » Nothing: A Portrait of Insomnia 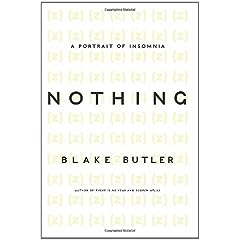 From the first sentence, Blake Butler’s poetic voice is clear. He writes: “Into the version of the sky above my house one afternoon when I was twelve, the nearby high school released a flood of pink balloons.” Throughout Nothing: A Portrait of Insomnia, Butler does not lose this creativeness, nor does his unique vantage point and description of the world diminish.  This book is meant to inform as well as to comfort.  I believe Butler intends this book to be next to you on your nightstand, so his story can walk beside your own and guide you through your restless nights. Butler does not try to offer direct solutions; instead he offers awareness, humanity, and warmth that someone else shares and understands your struggles with sleep.

The book is divided into an introduction and four chapters, but there is no table of contents—likely, in my opinion, because Butler wants his reader to follow him through his story, step by step.  The introduction sets the stage for how the book operates overall: weaving seamlessly between intimate experience and observations of the larger human network. He gives us the encyclopedic definition of sleep as well as some insight into his own issues with sleep, beginning as a child suffering from sleep terrors.  Perhaps the most creative section of the book, though Butler’s creativity shines throughout, he mimics the way the mind falls asleep to end his introduction.  He meticulously takes us through a list of outside influences (lights and noises) as well as inside processes that loop through our mind as we begin to sleep.  He beautifully captures and intertwines both his large philosophical thoughts and trivial matter.

Butler then leads the reader on a path of the history, science and culture (if you will) of sleeplessness that only a true sufferer could shed light on. In the first chapter (his title chapter), he maintains his balance of personal, reflective thought and scientific fact. He explains the types of insomnia and most notably points out primary and secondary insomnia.  (Primary insomnia is caused by mental disorders or a medical condition and secondary insomnia is related to more extrinsic factors.)  He balances these facts with a personal twist and writes his own discovery that sleeplessness “seems a hypersensitivity to the condition of being alive.” This shows his acute attention to detail and his intimate knowledge of the life of an insomniac.

The second half of this chapter echoes and explains the way the brain “clings” to ideas as tiredness sets in—he calls this section “Uncontrollable Reflection” and comically includes footnotes throughout that allude to different tangents his mind took while writing the section.

The second chapter gives a deep history of insomnia and theories on sleep in general.  He includes quotes and ideas from a range of people across history; almost everyone from Aristotle to Edison and beyond.  Again, he draws a parallel between history and his own personal experience,  explaining a recurring ‘dream’ he would have when he was awake for multiple nights and struggling with his insomnia.

Chapter three begins to get more desperate—similar to how a person may become more desperate for sleep as they watch the hours of the night pass by.  He explains here that he began eating large amounts of food in order to help himself fall asleep.  Unfortunately, he began gaining weight and realized that there was a large amount of scientific data to support the fact that as you increase your BMI, the quality of your sleep declines.  He describes his dreams again here and the pain and anger begin to surface in them.

Then, in the last chapter, he falls into the inevitable feeling of acceptance, tinged with defeat and resignation.  He delves into both the scientific issues as well as his personal issues he has had with sleeping pills.  To conclude the book, he writes a type of dialogue with himself and seems to find that the solution (for him) is writing.  While he is not the type to preach, I believe this is a message he is sending to his fellow insomniacs.  Certainly, it is not a cure, but perhaps it can be a comfort and a way of coping.

I enjoyed the book overall, but was especially drawn to Butler’s writing. This book is covered with praise for another book of his, There Is No Year, and I plan on reading that soon because of how much I liked his voice.  Butler has an extremely creative mind and his descriptions are gorgeous.  He is also able to condense and explain research and historical fact in a way that is approachable and intriguing.  I do not suffer from insomnia, but do have a particular interest in sleep and dreams and so I found this book very satisfying.  I would encourage you to read the book entirely, as it will make his experimental and creative sections more approachable.  He often likes to lead his readers down a dream-like path, so don’t get startled if things begin to feel unreal; that is, I believe, his intention.  He seems to be playing with the state of insomnia itself, still very much awake, but constantly on the verge of dreams.

APA Reference
Tomasulo, D. (2016). Nothing: A Portrait of Insomnia. Psych Central. Retrieved on October 30, 2020, from https://psychcentralreviews.com/2016/nothing-a-portrait-of-insomnia/