Reviews Home » Now What? An Insider's Guide to Addiction and Recovery 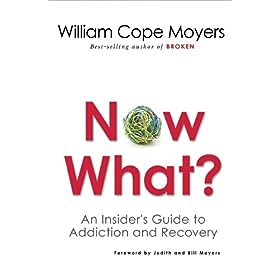 Now What? An Insider's Guide to Addiction and Recovery

William Cope Moyers is best known as the author of Broken: My Story of Addiction and Redemption, the memoir chronicling his addiction and subsequent recovery. The book quickly became a New York Times bestseller upon its release in 2006, and Moyers was invited onto numerous talk shows to talk about his journey and how he got clean. He appeared on several of those shows with his parents, Judith and Bill, to talk about how the three of them had faced his addiction together, as a family.

His father, Bill Moyers, is a successful television journalist and former White House press secretary, and the family used these public appearances as an opportunity to speak openly about their struggle and tackle the stigma surrounding the “typical” down-and-out addict.

Following these appearances, the author says, he received thousands of desperate letters, phone calls, and emails from relatives of users around the globe who were experiencing similar struggles. In this new book, Now What? An Insider’s Guide to Addiction and Recovery, Moyers attempts to address the mail and phone calls — and even use some of the stories within them — to explain how recovery worked for him, and how he has managed to stay sober since 1996. He writes: “I hope that in these pages you’ll find practical guidance with straightforward answers to what are often perplexing questions. Those questions and responses come from the experiences of insiders who were once where you are right now.”

It is this down-to-earth style and so-called insider’s perspective that characterize Moyers’s book and set it apart from the rest of the self-help manuals in its field. Moyers talks frankly about his own experiences and describes how he found himself in crack houses before finally deciding that enough was enough and reaching what he terms his moment of “surrender”:

For all of us, recovery begins the moment our inside world matches the outside world, and reality and perception become one. … Mine occurred in 1994, after a cocaine binge drove me to my knees in an Atlanta crack house. I was thirty-five, and the craving was so intense that what I knew I shouldn’t do was exactly what I did. I got high, and then I kept getting high even as my community tried to figure out how to save me from my illness.

This community included his family, and here again Bill and Judith play an important role, furnishing the book with a moving foreword and encouraging others to seek help as they did. It is this sense of community that is central to Moyers’s theory of effective recovery. He writes that because addiction is a “disease of isolation, the antidote is togetherness, other people, community—moving from ‘I’ to ‘we.’” Earlier, he writes, “If only you had honestly shared your thoughts and feelings with somebody in a position to help you—a family member, a recovery coach or sponsor, your counselor, a friend or ‘fellow traveler’ in your circle of recovery, anyone—before the dealer or bartender handed you your drug of choice.” It is the secretive nature of addiction that perpetuates it, he explains, asserting: “Nobody I know has ever relapsed if he first told the right person what he was about to do.”

Moyers now serves as a recovery advocate and ambassador, helping others through the process of recovery, and he is big believer in the Twelve Step approach of organizations such as Alcoholics Anonymous. He suggests that these weekly meetings are a valuable opportunity for users to meet with fellow peers in recovery, and to build up their own “social capital” and support network within the recovery community.

As well as the descriptions of Moyers’s own recovery journey, his book also contains many other users’ stories, gleaned from his years as a journalist in the recovery field. These are all presented in an open and honest fashion, and from the perspective of kindred spirits, rather than experts or advisers. There’s a good wealth of experiential knowledge within these pages, and it is delivered in a way that is far more appealing than just another guide- or textbook. The appendices also contain vital tools such as sobriety plans, screening tests, resource lists, templates for intervention letters, and the 12 Steps.

One of the most over-saturated areas of the psychology literature market is that of addiction and recovery. There’s no shortage of self-help titles penned by experts, professionals, researchers, and ex-users telling their own stories. So any new addition to the field has to have something new to offer, or at least cover the fundamental concepts in an innovative way. Fortunately, this book does both. Indeed, the author states that his goal is to “silence the noise and dilute the confusion.”

Moyers succeeds in doing this by sticking to gritty accounts of his and other users’ own experiences, and by describing simply what has worked for them. There may be more definitive recovery manuals out there, and there are certainly more complex textbooks on the topic, but this is a unique and valuable text that contributes a new perspective to the addiction and recovery field.

Now What? An Insider’s Guide to Addiction and Recovery

Now What? An Insider's Guide to Addiction and Recovery

APA Reference
Walters, S. (2016). Now What? An Insider's Guide to Addiction and Recovery. Psych Central. Retrieved on February 25, 2020, from https://psychcentralreviews.com/2016/now-what-an-insiders-guide-to-addiction-and-recovery/