Reviews Home » Obama On The Couch: Inside the Mind of the President 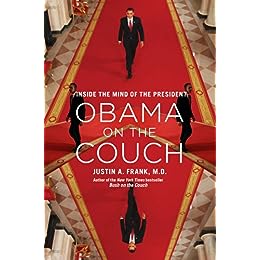 In 1979, a dictionary definition of the term ‘science fiction’ summarized it as “stories which do not imitate the events of the real world, such as the Earth being struck by a comet, or a black President being elected in the USA.”

I use that quote as a reminder of just how extraordinary Barack Obama’s 2008 election really was. It wasn’t just a change in leadership, but a fundamental shift in the way we all saw our world, and the possibilities within it. Overnight, science fiction became reality.  And, just as quickly, expectations started to build. This man had already changed the world before even becoming President. What would he go on to achieve once he was in office?

In 2009, less than two weeks into office, Obama was nominated for the Nobel Peace Prize. He won – the first U.S. president to receive the award during his first year in office — but it was never clear what he had actually done to earn this recognition. On accepting the award, the bemused president himself said that he was “surprised” by the award, and did not feel he deserved it. It seemed that simply being Barack Obama was enough. Before he had even set foot in the White House, the world had decided that this man was a hero, and that he would change everything.

It’s perhaps unsurprising, then, that Obama hasn’t been able to meet all of these impossible expectations during his first term in office. As someone who was presumably expected to have some kind of magical power and fix all of the world’s problems with a click of his fingers, simply doing the job of being a competent, pragmatic president has attracted a wave of criticism. Cynics have been disappointed by his failure to come through on some of the promises made during his campaign, and feel that the Obama that exists in the White House isn’t the same as pre-election Obama, who promised so much to so many. As the 2012 presidential campaign shifts into high gear those doubters are asking “What – if anything – has changed?” And it is that conundrum which lies at the heart of this book by Justin A. Frank:

My decision to analyze our presidents has its roots in wondering about the ways their psyches and the external and internal pressures they feel influence the difficult job they are trying to do. But what really propelled me in the case of our current president was being struck by what seemed like a disconnect between Candidate Obama and President Obama. I wanted to understand that better, since in this case I don’t think it’s simply a matter of a politician promising one thing and doing something else. And I was interested in how and why we, by an overwhelming majority, chose Obama to be our leader.

Frank has carved out a nice niche for himself in the psychology book market by psychoanalyzing people he openly admits he’s never actually met. Not just any people, mind you, but American presidents.  Frank is also the author of the New York Times bestseller “Bush on the Couch,” about George W. Bush, and the premise for his books is simple:

Frank draws upon the time-tested techniques of applied psychoanalysis to undertake a rigorous examination of our current president, providing fresh and valuable insights that will help readers in their frustrating pursuit of the president’s character.

As a reader, I have to admit that this initially caused me to feel skeptical.  I wondered how Frank could profess to offer any kind of genuine insight into people of whom his knowledge has come through secondary sources alone. It sounded like a gimmick to me.

And, to some extent, that’s exactly what it is. Rather than a serious psychoanalysis of the president, what we get here is a dense examination of the president’s life, through painstaking review of a huge number of sources, including his speeches, interviews, and of course Obama’s own books. Step by step, Frank takes us from Obama’s infancy, through his childhood and adolescence to look at the events which shaped the president, and how these might continue to affect his personal and professional decisions to this day. Frank does touch upon a number of compelling issues drawn from his studies, and it is clear from the depth of the material that Frank’s research is thorough and robust, and that his knowledge of the subject is second to none.

An example of this is Frank’s explication of Obama’s “emotional tone deafness;” the apparent lack of empathy or connection he is able to maintain with his supporters, and his failure to truly become the ‘people’s president.’ Frank connects this with abandonment issues, resulting from the lack of a father figure in the president’s childhood:

Though he can recognize the positive effect of his speeches, he misses the sense of abandonment that his supporters have increasingly developed since he assumed office.  Unbeknown to him, his followers often feel as though they are orphaned – that the man upon whom they counted, who unconsciously represented a combined parent to so many, isn’t there when he is most needed… When he rejects his followers in this way, Obama is evading what psychoanalysts call the positive father transference, the attraction patients develop towards a therapist into whom they project the attributes they wanted in their biological father. Obama is afraid to fully feel the father transference yearnings he excited in hurt and betrayed Americans who were looking for change.

As interesting and convincing as this doubtless is, many of Frank’s conclusions still amount to what are ultimately educated guesses, or rhetoric. We could never truly claim to psychoanalyze someone through secondary sources alone, particularly someone in the public eye who has no doubt already gone to great lengths to paint their public image in a very specific way. Furthermore, Frank clearly has his own political opinions and agenda, and these could not help but color the way in which he presents the subjects of his books.

Nevertheless, the level of detail ensures that this is still a fascinating and worthwhile read. It certainly seems to offer more of a complete and measured portrait of the president than any of the other biographies currently on offer. Importantly, Frank also does more than just analyze Obama here – he takes a systemic approach in the later chapters of the book, looking at how the past four years have affected both the president’s supporters and his naysayers, and how this in turn has had a broader impact on politics and society in general. It is this systemic analysis which forms many of the book’s most interesting chapters, including a study of the rise of small-mindedness in certain parts of America, and particularly the Tea Party:

Racism, envy, the demonization of the Other, and other dynamics we’ve been discussing all come together in the Tea Party, a group of people who feel the government, personified by the president, has robbed them of what they once had: a lost, white America where they had the freedom to do what they wanted, even if they accepted that they couldn’t own slaves anymore. The fantasy of being robbed of the freedom we once had and think we still deserve is familiar to all of us because we once were children and felt and lost such freedom… Members of the Tea Party are stuck at this level of emotional development, obsessed with the unchallenged fantasy of frustrated, stolen freedom… To a Kleinian psychoanalyst, the Tea Party is allied with destructiveness out of hatred toward the reality of modern life and resentment that they feel like strangers in their own land and can’t see themselves in their president.

Overall, this is a rewarding and enlightening book, once you get past the initial gimmick. By the time you’ve finished reading it, you’ll be convinced that Dr. Frank knows more about Obama than he even knows about himself, even though they never met. And anyone with a desire to know about the president would be hard-pressed to find a more detailed analysis than this one. It’s certainly being published at the right time, too, just before the 2012 campaign and elections. This would certainly make for excellent campaign reading, and may even persuade a few voters to give Obama that second term he so deserves.

APA Reference
Walters, S. (2016). Obama On The Couch: Inside the Mind of the President. Psych Central. Retrieved on January 23, 2020, from https://psychcentralreviews.com/2016/obama-on-the-couch-inside-the-mind-of-the-president/