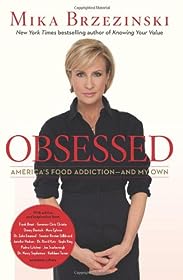 Obsessed: America's Food Addiction — and My Own

Have you ever heard a skinny, super successful, professional woman spouting the horrors of obesity? We all have, and the widespread reaction from anyone who has ever struggled with their weight is along the lines of: “Please shut up.” MSNBC’s Morning Joe’s Mika Brzezinski has been publicly ridiculed and even vilified for doing it. But this particular and stunning media mogul has earned the right to rail.

In Obsessed: America’s Food Addiction — and My Own, Brzezinski bravely smashes the stereotypical image of famous women’s slim-ease to smithereens. As hard as it may be to fathom from her perfectly put-together public image, this woman’s relationship with food for her entire life has been anything but amicable. Instead, it’s been a union of physical and psychological torture. With quotes like “The truth is I live under a daily tyranny of food cravings and I fight against them constantly” and “I was behaving like a junkie hungering for the next hit of crack” make it abundantly clear that she struggles greatly, despite her surface, television-ready looks.

Having had my own arduous dance with food my entire adult life I found Brzezinski to be refreshing and extremely brave. In ninth grade I stood at 5’4” and weighed 108 pounds. But my mantra was to lose “10 more pounds” so I kept myself on an 800-calorie-a-day diet. In high school I started fasting, fad dieting, taking speed, and sweating through two aerobics classes a day. This caused me to agonizingly toss 15 and 20 pounds back and forth like a pendulum. When it came time to go to college I was still fasting—but this time for 21 days straight. Not a morsel of food passed my lips. I simply didn’t think I was thin enough to function in my new life.

Like Brzezinski, today I am considered a thin woman by the rest of the world. How I feel about myself is another story. So, when I ever confess to anyone about my “weight issues”—something I rarely do—I’m met with a fierce expression and sideways stare, as if to say: “Do you mind?” The truth is I do mind. I struggle with obsessive thought patterns of what to put or not put in my mouth every single day of my life—and then, once I cave, I immediately think that a foodless day must unapologetically follow. As Brzezinski laments, I don’t even want to hazard a guess as to the number of hours and days I’ve wasted doing just that. And it does not diminish just because at this moment I appear thin.

What makes Obsessed different from other eating-disorder books I’ve read is that this one is not retrospective. Unlike in Caroline Knapp’s groundbreaking Appetites (two years after publication, Knapp died of heart failure due to years of anorexia), Brzezinski is alive and still battling her food addictions in public and to this day. And so as to not set herself apart from the rest of us, Brzezinski shares some truly mortifying experiences. For instance, she tells us, in a state of pseudo-sleep, she went down to her refrigerator, grabbed a jar of Nutella, and proceeded to eat the entire thing with her bare hands. Her husband witnessed the scene in horror.

Her book, however, is not only about one woman’s myopic personal struggle. Brzezinski also brings in other public figures and their personal food issues. People we know. People like Governor Chris Christie, Kathleen Turner, Senator Claire McCaskill, Jennifer Hudson, Charles Barkley. At Brzezinski’s urging, each one of these public figures openly, bravely, and honestly tell their story. Senator McCaskill is also a regular on MSNBC’s Morning Joe. Overweight and extremely self-conscious, she shares what used to go through her mind when she would first appear on set.

“I was always wondering what chair they’re going to put me in, and then I’m thinking in my head where the camera angle is, because I want to make sure that my back shot won’t reveal that roll of fat when I turn.” With incentive from Brzezinski and help from weight-loss coach and nutritionist Charles D’Angelo, McCaskill went from obese to a healthy weight: Neither camera angles nor fear for her life expectancy are now of concern.

Aside from personal testimonials, Brzezinski offers an eye-opening education on the American obesity epidemic, which is costing our country 190 million dollars annually, and whence it came. Most important, she goes about it with compassion and without blame. In the section “Fat: Whose Fault?,” Brzezinski takes a huge stand against the fast-food industry’s use of chemically modified ingredients that intentionally cause consumers to become addicted, as if to a poisonous street drug:

“Cheap, affordable, toxic food that coincides with a loss of American sidewalks, the raping of public schools and taking away gym classes, and a technological environment that invites people to do more by doing less. It’s the perfect storm of societal issues that I think will doom the next generation if we allow it.”

This easy read is far from just a memoir. It’s filled with hair-raising statistics, solutions to our nation’s obesity epidemic, as well as deeply researched weight-loss and nutritional advice. It is a powerful and passionate testament to the strength of full disclosure and crisis as opportunity, and to the transformative power of friendship.

Obsessed: America’s Food Addiction—and My Own

Obsessed: America's Food Addiction — and My Own

APA Reference
Reviews, B. (2016). Obsessed: America's Food Addiction — and My Own. Psych Central. Retrieved on September 25, 2020, from https://psychcentralreviews.com/2016/obsessed-americas-food-addiction-and-my-own/