Reviews Home » Our Superheroes, Ourselves 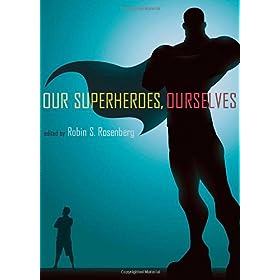 What does Lex Luthor have to do with gossip? According to two of the psychologists in Our Superheroes, Ourselves, our penchant to dish about people and our delight in hating supervillains are very much connected. Both exercise an instinct to identify so-called good from bad, moral from immoral. And both bring us pleasure.

Pleasure is, in some ways, at the heart of the book, edited by psychologist Robin S. Rosenberg and written by a dozen academics, including Rosenberg. Workplace psychologists, behavioralists, and communications experts explore why people love superheroes and supervillains, and what we can learn about human nature through comics and films. The publisher, Oxford University Press, lends the title an erudite sheen, but most pages favor lay prose over academic language. Unfortunately, some sentences could have used an editor. And though there are some nice insights throughout the book, at times the contributors seemed to take more pleasure in basic compare-and-contrast exercises than in using their academic prowess to truly investigate behavior and the mind.

It’s a thoughtful analogy, although the cynic in me assumes that even highly-esteemed academics like Pizarro and Baumeister clamor to use words like “pornography” whenever possible in order to attract readers. Regardless, the notable duo does discuss some intriguing concepts, such as the notion that evil is situational (think the infamous Stanford prison experiment) and that obvious bad guys like Lex Luthor and the Joker may harm our ability to recognize subtler wrongdoers in real life.

In another chapter, communications professors Elizabeth Behm-Morawitz and Hillary Pennell discuss gender in comics. I was thrilled to see them examine stereotypes (the damsel-in-distress, the oh-so-angularly-faced manly rescuer), yet the analysis fell short in one respect. As the authors point out, damsels populate many superhero stories, but then comes the rare female superhero, who “both resists and conforms to familiar gender conventions.” There aren’t very many of these larger-than-life ladies, and I was curious to see what Behm-Morawitz and Pennell would make of Wonder Woman, for instance. Unfortunately, although they underline important ideas (e.g., that female superheroes have “masculine” features, but are still feminized and objectified), much of their descriptions could be applied to Hollywood characters more generally. The authors do try to explain that they are speaking about a superhero trend in particular, but their explanation is lacking.

“Although the objectification of women’s bodies is not new to film, this is especially prevalent in superhero films,” they write. “The camera pans up a woman’s body or focuses on certain body parts, usually the chest and legs, and the audience is positioned to her body voyeuristically.” While there may be some validity to that statement, I’m certain such camera moves happen in other movies, too. The authors provide little else to bolster their argument that women in superhero movies are portrayed differently than women in regular action movies. So although I always appreciate attention to stereotyping, sexualizing, and the effects of media images on gender norms, the chapter felt more like a treatise on gender-in-media that I’ve read elsewhere than something specifically written for a superhero book.

Meanwhile, Lawrence C. Rubin’s contribution, “Are Superhero Stories Good for Us,” centers very much on the particulars of comic-book heroes, but it still didn’t quite pull me in. Whereas Behm-Morawitz and Pennell cite studies on gender and media, Rubin uses anecdotes from his own clinical practice and research to show just how transformative and helpful the superhero narrative can be for a patient. The entry opens with a description of Roberto, a man whose mother taught him to feel good about his own adoption through the story of Superman’s. Rubin successfully shows how Roberto and others find comfort in the narratives that mirror their own — how a 5-year-old girl, for instance, acted out her parents’ terrible fights by using superhero action figures during therapy sessions.

The analogies are clear, and Rubin cites research on how writing one’s own narrative, with the help of an external one, can lead to catharsis. Yet nothing in the chapter made me stop and wonder, or struck me as enlightening. Much as I love to dissect both literature and psychological research, I was in this case most drawn in when Rubin confessed to having a Superman tattoo.

Taken together, Our Superheroes, Ourselves didn’t impress as much as it could have. Rosenberg et al. give us a few sparkling passages, yes. But unlike Superman himself, they don’t quite crush coal into diamonds.