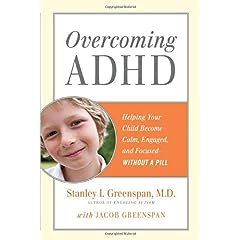 Overcoming ADHD: Helping Your Child Become Calm, Engaged and Focused Without a Pill

Overcoming ADHD: Helping Your Child Become Calm, Engaged, And Focused – Without a Pill, was written by the late Stanley I. Greenspan, M.D., noted psychiatrist and psychoanalyst, with Jacob Greenspan. Published in 2009, Overcoming ADHD was based on Dr. Greenspan’s work with children with developmental and emotional problems. Unfortunately, the book left me with more questions than answers, resulting in a mixed review.

Belying its title, Overcoming ADHD is presented as a hands-on guide for parents of children with attention deficits in general. Because of this, and the book’s poor writing and editing, I was not convinced of the efficacy of Dr. Greenspan’s program in terms of treating attention deficit hyperactivity disorder (ADHD) children specifically. On the other hand, I was curious enough about its contents to research Greenspan’s work. It was only as a result of this research, and after viewing a short video of Dr. Greenspan’s work with a client, that the concepts in the book came to life. In other words, the book does not do its job.

Greenspan contends that the vast majority of children with ADHD can overcome their difficulties by applying his approach, without medication. He states that there may be biological factors contributing to an ADHDer’s difficulties, and that, “… not all these factors are changeable, in the short run at least, and some not in the long run. But most can be overcome, or at least a child can gradually learn to compensate for them effectively.” However, at one point he suggests that achieving this goal may take years. I’m not entirely convinced that the majority of parents, even those who would prefer that their child not take medication, would be willing to let their child malinger, not reaching their full potential, for years.

The book outlines Greenspan’s way of looking at attention deficit disorder, followed by an overview of his approach to treating it. The case history of an 8-year-old patient, whose treatment he feels typifies the efficacy of his method, follows. The next four chapters focus on strengthening the child’s motor skills, sensory processing, emotional and cognitive abilities, and visual and auditory capacities.

Following this is a chapter on building self-esteem in kids with ADHD. This chapter is one of most successful ones in the book. Next is a chapter on the family system and how family members must work together to implement Greenspan’s program. Finally, the child’s physical environment, including the child’s physical health, nutrition, environmental toxins, light and sound, and how these contribute to attention deficits, is presented.

A brief chapter on adults with attention deficit disorder follows. Unfortunately, this chapter is of little value as its main point is that ADHD adults should implement the program, developed for play with children, for themselves. I have several issues with this suggestion. First, ADHD in adults, particularly in those who are diagnosed late in life, looks very different from that of ADHD in kids. For example, more entrenched self-esteem issues may be present, and so on. Second, hyperactive as I am, it’s difficult for me to envision wiggling on the floor like a worm, part of a core exercise for improving motor skills.

The concluding chapter discusses when additional therapy and medication are needed.

A “Sensory Processing and Motor Abilities Questionnaire” is included, with questions intended to help the reader identify an individual child’s weaknesses and strengths. Unfortunately, and in keeping with the book’s overall inability to communicate, the questionnaire utilizes a nonsensical rating scale.

1b. do you feel that your child craves and seeks out the type of sounds described above?

The only instructions for completing the questionnaire are to circle the number that most closely applies under each question. What is meant by choosing 2, 4, or 6 above is not defined, and is in fact meaningless. This imprecise language unfortunately reflects the sometimes incomprehensible writing that often obfuscates Dr. Greenspan’s message.

A list of suggested books for further reading, a list of resources, and an index conclude the book’s contents.

Being a layperson, but well-read regarding ADHD, as well as being an adult with ADHD myself, I tend to wonder if Greenspan’s methods (which are used with autistic and other attentionally-challenged kids) are entirely transferable to the ADHD child. While autism and ADHD are said to be in some regards related, surely these disorders are not the same. My concern is that, while a majority of ADHD children have been shown to improve with medication, I wonder if Greenspan’s methods alone would be enough help an ADHD child to reach their academic or social potential without unduly falling behind.

On the other hand, one strength of Greenspan’s approach is echoed by Dr. Gabor Maté (author of SCATTERED: How Attention Deficit Disorder Originates And What You Can Do About It), in that both emphasize the importance of healthy family dynamics in the optimal development of children predisposed to ADHD.

The thrust of Greenspan’s approach is to utilize a number of interactive activities, including games and so on, which are targeted to an individual child’s identified weaknesses. This approach, according to Greenspan, strengthens what he refers to as the “core abilities” related to the child’s ability to attend.  The goal is to enhance the child’s ability to pay attention, interact with others, self-modulate, and so on. I appreciated Greenspan’s focus on assessing an individual’s strengths and deficits, as opposed to applying a one-size-fits-all approach. Unfortunately, as we saw, the questionnaire provided to measure the child’s deficits is in itself flawed to the point of being unusable.

Another concern I had that was not addressed by Dr. Greenspan’s book was the practicality of his program. Daily parental involvement, the participation of siblings and high school or college students, who, he suggests, should be recruited to help implement the program, are all necessary. I wonder how realistic this is for today’s busy families.

I also felt that ADHD symptoms such as impulsivity and hyperactivity were either not convincingly addressed, or not addressed at all. One example of a less-than-persuasive argument occurs in Chapter 6, “The Role of Emotional Interaction and Thinking in Fostering Attention.” After assuring us that as the child gets older, his reflective thinking becomes increasingly stronger, the author says, “Of course, if the child’s emotions are very intense, if he is really overwhelmed, like any adult he can regress and become a polarized thinker or go back to becoming impulsive, scattered, or withdrawn. It happens to the best of us.”

Greenspan’s comment that, “it happens to the best of us,” seems to imply that the circumstances he describes are no different for an ADHD child than for anyone else. This kind of comparison is all too common in the general population, who are not educated about the differences between an ADHD and a non-ADHD brain. One hopes that it is due to unfortunate editing, rather than a lack of understanding of ADHD, that this type of remark occurs in Overcoming ADHD.

I remember being an extremely hyperactive ADHD child, and also that my emotions were more often than not very intense. My day-to-day state in childhood was one of being overwhelmed. Even had I received the benefit of Dr. Greenspan’s program as a child, I wonder if I would ever have been able to live up to his sentiment that, “…one hopes, a child will become reflective enough to notice his behavior and say, ‘Gee, I’m out of sorts today. What have I been eating? What have I been doing? What’s going on that might be making me nervous?’ He can notice that he has been staying up late and was exposed to a lot of loud noises for three days in a row and his system is getting overwhelmed.” A lofty ideal for any child, and for many adults, for that matter.

At times, the author addresses the needs of children with cerebral palsy, visually impaired children, autistic children, and so on. Again, one suspects that better editing would have eradicated references irrelevant to the book’s stated mandate of Overcoming ADHD.

Greenspan’s suggestion to implement his techniques for six months, assessing whether or not the child is making improvements, seems reasonable. Then, he suggests, the addition of medication to the child’s treatment may be considered.

Unfortunately, it was only by conducting further research, and, ultimately, through watching Dr. Greenspan and a client implement the techniques in Overcoming ADHD, that this writer was convinced that his program is, after all, worth trying with an ADHD child.

If a picture is worth 1,000 words, then the video was worth a million. And, I would suggest, it would take several more well-written words to allow this book to stand on its own.

I would highly recommend that readers first familiarize themselves with the websites and video referenced below, before reading Overcoming ADHD. The book might then be used as a reference guide in implementing the program. It would also act as a reminder regarding how to establish and maintain helpful family relationships; and in how to foster positive self-esteem in ADHD kids.

Circles of Communication (A video of Dr. Greenspan working with a mom and her child to implement his program)

Obituary for Dr. Stanley I. Greenspan

Overcoming ADHD: Helping Your Child Become Calm, Engaged and Focused Without a Pill