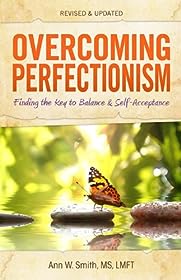 When you’re a perfectionist, it could always be a little bit better. Every task you work on, that is. And so, the planning and revision go on and on, and the final product never quite gets done. Just when is something “good enough”?

I might not be the best person to ask, as I have sometimes been called a perfectionist myself. But what, really, does that mean?

Ann W. Smith wrote the first version of Overcoming Perfectionism about 20 years ago, and as she writes in this edition, back then she focused much more on so-called codependency and on the children-of-alcoholics movement. She explains that she dropped many of those labels in this edition, and that is a good thing. One of the problems I remember with codependency was that the label was so broad that anyone could be given the (unofficial) diagnosis. And if everybody is codependent, maybe it is just human nature and not a disorder.

Still, even human nature can cause us problems when what once were adaptive behaviors are no longer functional. Smith does a good job of describing when and how vestigial behaviors become problematic, and she helps the reader learn how to cope and change. Although the book is largely aimed at perfectionists themselves, it also gives advice to those who must cope with a perfectionist loved one.

So how do some of us come to make an unconscious choice to behave in ways that cause us pain? Smith looks to attachment theory. She noticed over the years that persons with perfectionist issues (and she includes herself, with examples from her own life) come from all sorts of families, not just those from the substance abuse world. We come into this life helpless and are dependent on our family to take care of us. Our “Plan A” is to get what we need from our family. If this does not work, Smith writes, we go with “Plan B” — getting it from somewhere else. If we do not get our survival needs met somewhere, we die. And so, those who act the way they think others want them to, in the hopes of getting their attachment needs met, often become perfectionists. They are resorting to Plan B, and a behavioral pattern is formed.

I like how Smith looks at behavior from a multi-generational standpoint. Indeed, we sometimes live out the stories of our grandparents, or relatives even further back, without knowing we are doing so. Patterns develop and continue into our adult lives, and we give them to our kids — even when we have sworn not to pass along the grief. The behaviors we learn early on in stressful and painful families are carried with us, and we may think they are just part of the way life is.

The book provides many examples, and one case study is particularly telling. It follows two families over three generations. Each set of parents in the first generation has dysfunctions that cause their children stress and pain. In one, a parent has an alcohol problem, has trouble keeping a job, and is abusive. In the other, the father is successful but cold and distant. The daughter from the alcohol-abusing family meets the son from the cold-and-distant family and they marry and have kids. The pain of trying to look good for others, of needing but not getting emotional intimacy (and perhaps not even knowing what that is), of feeling isolated, of dancing between the need for intimacy and the fear of entrapment — all of these forces build until the breaking point. We become human “doings” rather than human beings as we try to gain approval by using the strategies we learned even before we can remember.

Smith does do a good job of guiding us toward healthier ways of living and healthier ways of parenting. As the book’s subtitle puts it, balance and self-acceptance are key factors. Self-awareness is the first step, and Smith provides tests to help readers become more self-aware. In researching the book, she surveyed a number of perfectionists. And in true display of their problem, those surveyed often could not choose between Smith’s multiple-choice list to answer a question, and instead turned these into essay questions — even took it upon themselves to write a critique of the survey.

It is difficult for highly-perfectionist folks to find self-awareness (Smith calls it one’s “essence”) when one of the defining traits of perfectionism is trouble with decision-making (hence the giving of essay answers for multiple-choice questions). Another problem of perfectionists is finding a sense of self, of who they are. They have been defined by “Plan B” for their whole lives. It is helpful that Smith looks at different styles of attachment, which again can allow us to consciously see where our pain is coming from. She writes that we need to maximize our strengths and moderate our troublesome traits.

When you have spent a lifetime being what others want, or what you think they want, it isn’t easy to let go of your pattern. It is, instead, frightening and paradoxical to learn that giving up control can bring you peace. Here, Smith shares her years of experience to help us learn how.

Overcoming Perfectionism: Finding the Key to Balance and Self-Acceptance