Reviews Home » Disorders » Schizophrenia » Paranormality: Why We See What Isn't There 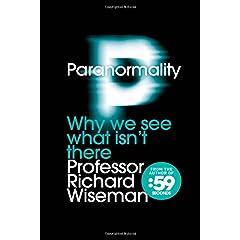 Paranormality: Why We See What Isn't There

Author and professor Richard Wiseman has spent his career investigating and debunking everything from ghosts to psychics to séances to prophets.  While he now has a PhD in psychology with an emphasis in parapsychology, he started out as a professional magician. This experience led directly to interest in the paranormal because, by trade, magicians “know how to make you misperceive what is happening inches from your nose, prevent you from thinking of certain solutions to tricks, and persuade you to misremember what has happened right in front of your eyes (p.3).”

Paranormality: Why We See What Isn’t There does not discuss if the phenomena are real (and Wiseman is very firm in stating that they are not), but rather why we and our brains have evolved to experience them.  This fascinating perspective, which the author presents clearly and entertainingly, is applied to many different aspects of the paranormal, coming to a similar conclusion each time: that our senses and our minds are incredible in what they perceive, and that investigation into the supernatural leads directly back to the very grounded realm of scientific discovery.

Paranormality’s chapters are organized according to various mystical realms. For example, Chapter 1’s focus is fortune telling.  Psychics mainly use “cold readings,” in which the psychic has not previously met the person seeking a reading.  While many people are very impressed with what these practitioners can “see,” Wiseman explains that six empirically proven psychological techniques are the basis of a psychic’s power.  These include flattery, selective memory, the illusion of uniqueness, etc.   To further drive home the point that anyone can learn to be a psychic, the author provides a set of exercises so the reader can amaze and astound her friends with her new “powers.”

Out-of-body and near-death experiences (OBEs) are the most common encounter people have with the paranormal.  Rather than having touched heaven or the astral plane, however, Wiseman notes that after examination:

“…people who experience OBEs are much better than others at naturally generating the type of imagery associated with the experience, and struggle to tell the difference between reality and imagination.  Put these people in a situation where their bodies receive only a small amount of unchanging information about where they actually are and […] they can end up believing that they are no longer located inside their bodies.” (p. 88)

In fact, according to the end of Chapter 2, with training, anyone can learn to fly around the world while lying in bed!

Chapter 3 delves deeper into psychic deception, which is what makes the majority of all paranormal phenomena possible to experience.

“The first four principles of psychic deception […] ensure that people do not figure out the solution to the tricks that are happening right in front of their eyes.  The fifth principle […] ensures that they are unable to accurately remember what happened.” (p. 126)

This chapter also presents the first of the many scientific conclusions that investigation into these principles has drawn:  among other real-life effects, selective memory undermines the reliability of eyewitness testimony (p. 130).

The following sections on talking with the dead and ghost hunting expand upon this premise, with Wiseman detailing how reports of these occurrences have led directly to discoveries of the unconscious, ideomotor actions (actions performed without conscious intention), the power of suggestion, and sleep psychology. Even cult brainwashing has provided a lens into hazing and the power of self-justification.  In probably the most direct cause and effect example, the famous case of Clever Hans (the mathematical horse) made abundantly clear the need for double-blind experimentation.

The final phenomenon that Wiseman explains is prophecy.  He specifically asks why we have evolved to believe in the impossible, namely that one can predict the future through dreams or other divination.  His answer is that this tendency to attribute other-worldly revelations dates back to primitive pattern-finding skills.  Humanity has developed a “…built-in tendency to find connections between completely unrelated events.  In doing so, you can easily convince yourself that you have experienced the impossible (p. 306).”

With its clear, step-by-step explanations and scientific rationales, even the most intense believer will have second thoughts after reading Paranormality.  And if you’re already fairly skeptical, Wiseman provides a fascinating look at how it all ties together.  Not only is the author obviously very knowledgeable and experienced, he also is able to present his research in a humorous, tongue-in-cheek manner.

Paranormality is also a practical work, with real-world applications and lessons included in every chapter (as well as an “Instant Superhero Kit” in the appendix to tie it all together).  In this way, it’s not only a psychological tome, but a ‘how-to’ on learning mind reading, making objects float, talking to the dead, having an out-of-body experience, etc.  Smartphone tags are scattered throughout for related video and audio content, which are especially interesting when used to expand upon anecdotes presented in the text, and suggestions for further reading are included in the Notes.  Not on the list, but a related work that readers who enjoy this book will love, is Sleights of Mind: What the Neuroscience of Magic Reveals About Our Everyday Deceptions (see review here).

Wiseman isn’t only about ruining the magic of the supernatural with his insistent disproving of any otherworldly phenomena, though.  His view is that knowing how these instances are experienced doesn’t decrease the wonder of phenomena, but rather that “seen in this way, rotating pencils and bending spoons are not proof of the impossible, but are instead vivid reminders of how sophisticated your eyes and brain really are (p. 132).”

Between this observation and the numerous advances in science resulting from the paranormal, Paranormality leaves the reader with an appreciation of what ghosts and psychics can teach us about ourselves—but through neuroscience, not mystical means.

Paranormality: Why We See What Isn’t There

Paranormality: Why We See What Isn't There

APA Reference
Williams, K. (2016). Paranormality: Why We See What Isn't There. Psych Central. Retrieved on July 13, 2020, from https://psychcentralreviews.com/2016/paranormality-why-we-see-what-isnt-there/