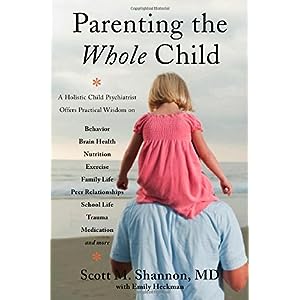 The brain is a fascinating organ. It weighs about three pounds when fully grown and entails a plethora of complicated electrical and chemical processes that can stump the savviest of scientists. Encased in a jelly-like substance in the skull, it is thought to separate human beings from other animals, and allows for the sophisticated thought processes, emotions, and behaviors exhibited throughout our lives.

But although we have quite a complex, resilient brain, poor health, age, stress, abuse, neglect, trauma, substance abuse, and a host of other life circumstances can affect its functionality in negative ways. Different brains cope with trauma differently — some more able to withstand it, some less. Meanwhile, a child’s brain is especially complicated — and requires a host of positive experiences to remain healthy.

In Parenting the Whole Child, Scott Shannon, a professor of psychiatry, sets the stage for families to understand their child’s mind.

That mind is ever-developing, producing billions of neurons at birth and continuing throughout life. Thus it is important that parents understand how to properly treat the developing brain of their child, Shannon argues, and to identify unhealthy experiences that may negatively affect how that brain grows. To that end, Shannon shares his frustration with how much suffering our children experience today.

Shannon goes on to explain that “the behavioral and emotional problems we see in our children today are too readily being considered and treated as medical problems rather than being addressed as the relational, nutritional, and environmental problems they are.”

In other words, rather than diagnose children with illnesses and problems, Shannon urges us to see that there are some children who are simply undernourished, overmedicated, and struggling with interpersonal relationships and poor brain health. After all, behavioral and emotional problems are often likely if brain health, nutrition, and proper diet are ignored.

As a clinician myself, I see how in the wake of the new DSM-5 guidebook it can be difficult to distinguish true mental or behavioral health concerns from normative development. In fact, critics of the revised manual state that with diagnoses such as communication disorder, disruptive mood dysregulation disorder, premenstrual dysphoric disorder, and dis-inhibited social engagement disorder, it is now even more difficult to separate illness from challenges of development.

Temper tantrums, for example, are normative for many young children — even for tired adults. But whereas the DSM-5 will likely turn temper tantrums into disruptive mood dysregulation disorder, Shannon attempts to keep the diagnostic-labeling fad at bay by highlighting the importance of examining the whole child.

“We’re a culture that just isn’t comfortable with the gray areas, with difference,” he writes. “We want things to fit into simple categories. We want things to be neat and tidy. We seem to want everything in our lives — even our kids — to conform to an ever shifting — and shrinking — definition of ‘normal.’ We’re even willing to medicate our children in order to achieve this mythical state.”

So, in easy-to-understand language, Shannon asks us to take a step back and take a more holistic approach: to consider the challenges of normative development, the effects of negative life experience, and the deleterious effects of poor nutrition on child development.

As a child and adolescent healthcare provider, I support the way Shannon encourages the public to think about children and their brains in nuanced terms and to take a holistic approach to their well-being. I see firsthand the concerns many parents have about medicating their kids. Those concerns are legitimate: Medication is not the only “remedy” for the brain.

Indeed, we humans, especially those with still-growing minds, require extensive evaluation and sometimes complicated treatments. With his keen understanding of this, Shannon has written a must-read for parents.