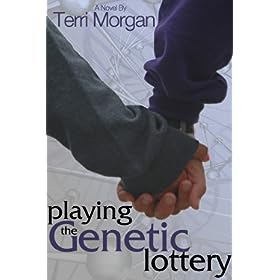 In her first novel, Playing the Genetic Lottery, Terri Morgan tells the story of Caitlin Kane, a young woman whose parents and sibling suffer from schizophrenia. The novel is written as a sort of faux-memoir by the main protagonist. The book does have its merits and also provides a unique perspective regarding schizophrenia as well as some other types of psychiatric diagnoses. However, I wouldn’t consider it to be an essential read.

As a mental health professional who works with individuals with various diagnoses, whenever I read a novel that portrays characters with mental illness there are certain things that I look for. First, I want to see if the author provides a realistic depiction of the symptoms that are presented. Also, I am interested in seeing what type of issues the author raises in regard to the diagnosis. On these accounts, Ms. Morgan does an excellent job. The way in which Caitlin’s parents are described never seems to be far off the mark from the reality of schizophrenia. The characters are not made to seem completely out of control like some schizophrenic stereotypes. Yet the author also does not sugarcoat the difficulties that the disorder can present in one’s life.

Caitlin, the story’s central character, is used to illustrate a multitude of complications that can arise when a person suffers from schizophrenia. We see the starts and stops with regard to treatment that are an unfortunate reality for schizophrenia patients and their families. There are the frequent hospital visits and the constant trying to make sense of her parents’ often-bizarre behavior. We see the strain that such an illness can put on a family, as Caitlin leaves to live with her uncle.

While Playing the Genetic Lottery does portray schizophrenia realistically, I did not find the overall story to be that enticing. Caitlin is a strong character, and her success through such a turbulent upbringing does provide the reader a sense of hope. However, many of the other characters that she deals with throughout the story seem somewhat stilted. There are only brief glimpses into some of the more interesting parts of their personalities.

Much of the plot revolves around a love story between Caitlin and Jason, who she meets while going to visit her brother at a behavioral health unit. I found it difficult to become involved in the romantic aspects of the story; however, this relationship was used with good effect to examine the issues that can arise for children of parents with schizophrenia. First, Caitlin questions whether she will develop a mental illness like her parents and brother have.  How would it affect her relationship with Jason if this happens? Also, if they did decide to commit to a long-term relationship, would the risk of having children with a mental illness be too great?

I will not spoil the novel’s outcome, but I will say that the author provides a well-educated examination of the questions at hand. Those uninitiated with mental illness and its treatment may actually learn a great deal through the story of Caitlin and her family. Whether Ms. Morgan writes from research or personal experience, I do not know. Yet she seems to cover a variety of topics, from the epidemiology of schizophrenia to the different modalities of therapy that are currently used. The problem with this, however, is that the dialogue between characters sometimes feels like a recitation of a psychology textbook rather than an actual conversation. I understand that the author wanted to make sure she provided accurate information; however, there were several points where this took me out of the story.

For someone who is unfamiliar with schizophrenia or mental illness in general, I can see this being a good introduction. The author even provides discussion questions at the end of the book that make it a good choice perhaps for an introduction to psychology class or a book club. However, for someone who has extensive history dealing with schizophrenia either through personal or professional experience, I would not recommend this book. The story, on its own, did not have enough emotional impact to keep me interested in the characters.

At the same time, I commend Ms. Morgan for writing a novel that examines such complicated issues. As this is her first novel, I look forward to seeing how she may expand on similar themes in future works. I believe it is important for us to use literature as a means of educating others about mental illness and fighting against the stigma in our society. While Playing the Genetic Lottery may not be a perfect novel, it does offer a glimpse into a part of the world that is all too often ignored.

Standing Up For Yourself Is A Skill- Not A Given