Reviews Home » Pocket Guide to Interpersonal Neurobiology: An Integrative Handbook of the Mind 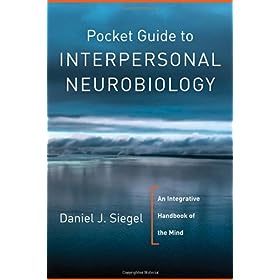 The Pocket Guide to Interpersonal Neurobiology is a streamlined compilation of the Norton Series on Interpersonal Neurobiology (IPNB), which use multidisciplinary views to help understand the human mind. The objective of this relatively new field is to study “the ways in which relationships and the brain interact to shape our mental lives” and “is meant to convey the embracing of everything in life from society (interpersonal) to synapses (neurobiology).” The book’s goal is to offer a straightforward exposure of the knowledge comprising interpersonal neurobiology.

Author Daniel J. Siegel structures his book to be read in any order. He encourages readers to “flip the Pocket Guide open to any page and you will find an ‘entry point’ that guides you to explore, in your own way, the web of integrated knowledge.” The table of contents cover varied and numerous topics such as ‘Mindful Awareness,” the “Brainstem,” “Attachment,” and “Un-Health and Dis-Ease.” In his chapters, Siegel defines and expands his concepts as well as ensures that his readers pay attention to key ideas for the comprehension of the IPNB model. He also discusses the implication these specific concepts have for our lives.

Siegel illustrates some of his intricate ideas with visual representations. For example, he uses the “triangle of well-being” to explain how IPNB views the mind, brain and relationships as a single component rather than three separate entities.

Siegel describes integration as “the mind’s process of linking differentiated parts into a functional whole   . . . to be the fundamental mechanism of health.” He emphasizes how integration becomes the context for looking for dysfunction and the energy/informational flow becomes the focus for correcting the dysfunction. The premise is that integration creates harmony and that impaired integration leads to chaos and rigidity. When an individual’s brain or relationships are not integrated, they move into a dysfunctional state and the brain is unable to balance things in a flexible manner.

Siegel recognizes each individual’s inherent potential to become whole by their capacity to release the specific blockage that may be inhibiting their ability to integrate. He further stresses that the role of the mental health professional, teacher, or parent is to facilitate the potential for integration that is innate in everyone.

Siegel implements several methods to communicate interpersonal neurobiology’s concepts clearly and simply. I admire his efforts to draw from a wide range of fields — including genetics, anthropology, and evolutionary psychology — to incorporate into his INBP model. At times, however, his message becomes convoluted from trying to incorporate perspectives from so many other disciplines.

Someone unfamiliar with Siegel’s subject matter may have some difficulty following along. The Guide may be easier to follow for those who are already a fan of Siegel’s work in IPNB. Nonetheless, Siegel’s book does an amazing job reflecting his vast knowledge of how our brains and our relationships interact to shape our lives.

Nicholette Leanza, M.Ed, LPCC-S is a licensed psychotherapist with a great deal of experience working with children, adolescents, and adults in a variety of treatment settings. She is a native of Cleveland and works as an adjunct instructor of Psychology and Sociology at the University of Phoenix, Cleveland Campus. She is a wife and a mother of two wonderful children and in her free time she enjoys yoga, reading, and traveling.