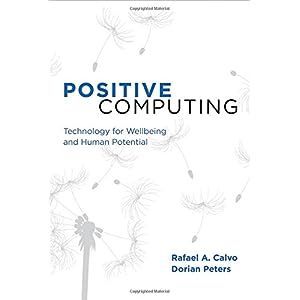 More and more people who work in technology need to take into account the wellbeing of their users when they design new applications and systems. Sometimes they must do this directly — for instance, for apps where health and fitness is a primary goal. Sometimes it is indirectly, when they want to increase user engagement and motivation — and sometimes collectively, by attempting to do good in society and increase the wellbeing of communities.

Psychological concepts like flow, compassion, empathy, altruism, and mindfulness are no longer foreign to the tech realm — yet many techies who wish to enter this interdisciplinary domain still find themselves unsure of what the vocabulary means, or how they can start to incorporate these ideas into their designs.

When I started my first company, Signal Patterns, back in 2005, I had to prepare a welcome packet of academic papers and book chapters for every new employee so that everyone would understand the fundamentals of what we then called the technology of psychology. The chasm between the two disciplines was so vast that it often took our developers months to learn the terms used by the psychologists on our advisory board, let alone understand with some depth the psychological constructs they were studying.

A book like Positive Computing, by Rafael Calvo and Dorian Peters, could have saved us time and helped us bridge the gap in just a few days.

Positive Computing is an important book in a few different ways. First, it is jointly written by a computer scientist and a social scientist, meaning it surveys the relevant psychological literature through the eyes of a technology professional. This approach brings a new framework that can be used by social scientists and engineers alike as they embark on new projects together.

And that new framework is not only a good foundation for the creation of new products, but also a good means of identifying the gaps that still need to be studied. Researchers will also find this book useful, then. It can help them identify the most interesting research questions as well as the potential impact of the answers.

Authors Calvo and Peters provide an introduction to positive computing, including some of its vocabulary. The book goes on to lay out their framework and give examples of how psychological concepts intersect with design. While this may be more obvious when a product is directly related to wellbeing — such as a mindfulness app, or one that motivates the user to walk 10,000 steps a day — Calvo and Peters show how one can inject wellbeing into everyday digital interfaces, too.

“For example,” they write, “an argument could be made that when ‘focus view’ was added to Microsoft Word or the ‘distraction-free writing’ button was added to WordPress, the feature was integrated for the purpose of supporting engagement and flow.”

In other words, psychological research is relevant to all techies, even when they work on apps and interfaces that are primarily used at the office. Just a simple tweak to a word processing program can increase wellbeing.

Likewise, the authors write, designers and developers can also make changes to social media networks or to games that will help increase altruism or gratitude among users.

The book also cites studies on how technology can be used to collect wellbeing data. For instance, a recent study from Microsoft Research showed how public Twitter and Facebook data can be used to to predict postpartum depression.

In addition to useful examples of what has already been developed in this realm and what possibilities exist for future programs, the book offers something else quite substantive: the creation of a new community of professionals. A joint group of designers, developers, engineers, and researchers who understand the psychological determinants of human wellbeing and who know how to apply them.

Such a community will build products that can help humankind go beyond just counting steps, taking meds on time, or drinking more water. They will use concepts like altruism and flow as they design new apps — and they will hopefully aid all of us in making a deeper transformative shift at the core. Positive computing, when understood by both psychologists and technologists, can lead to human flourishing, and to a qualitatively richer life experience.