Reviews Home » Stress Management » Post-Romantic Stress Disorder: What to Do When the Honeymoon is Over 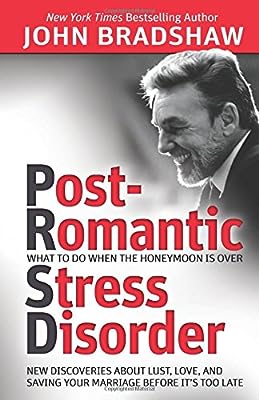 If you’re like me, you’re probably a bit turned off by the idea of post-romantic stress disorder and wonder what the ultimate purpose of a book with such a title might be. Post-traumatic stress disorder, on the other hand, is a serious condition, and the title seems potentially offensive.

In author John Bradshaw’s words, post-romantic stress disorder happens when we leave the beginning stages of a relationship and things become less pleasurable. The bond is souring, and it feels like a previously burning flame that has been snuffed out by a strong cold wind. Romance, excitement, and emotional intimacy are gone.

Bradshaw postulates that about forty percent of divorces occur as a result of this “disorder.” He writes that when the romance is over, it can be quite difficult to rationalize with your partner or emotionally detach from the relationship. Jealousy or resentment can become a big problem, he writes. And then, Bradshaw discusses the more unhealthy outcomes of PRSD, such as rejection, anger, domestic violence, stalking, and even murder or suicide.

Here is where the book gets a bit disturbing. Stalking and violence are real issues that many people content with. Oddly, Bradshaw shares with the reader the story of how one of his own clients stalked him: followed Bradshaw around, showed up unannounced in various places, and eventually retreated to only sending him letters until she completely went away. He even tells us that he took the time to reply to his stalker, writing her back to tell her he was committed to his marriage and not interested in having a relationship with her.

As a therapist myself, I would be wary of mentioning such an incident in a book. I would not want to bring up this sensitive information in a public way. I couldn’t help but think that Bradshaw was sharing the story unnecessarily, and inappropriately. Then, the back-and-forth “letter writing sessions” he engaged in with a person who clearly lacked appropriate boundaries and suffered obvious emotional problems — that made me especially question his judgment as a therapist.

I was also turned off by Bradshaw’s constant discussion of sexual intimacy, lust, and sexual “dysfunction” throughout the book. Yes, these are part of many relationships, but the point of the book, I was led to believe, was more about the relationship in general.

The book gets uncomfortable again when Bradshaw presents the story of a man named Gilbert. Gilbert is hired to work as a geologist for a company Bradshaw also works. Bradshaw uses him as an example of domestic violence and murder, and discusses Gilbert’s sex life. The whole thing lacks tact.

And although later chapters made me think Bradshaw was getting back on track, offering insights about relationships and how to repair them, he ultimately fails to give the reader enough tools. Most relationship books speak a great deal about open communication and respect, provide concrete tools for increasing positive interactions, or offer psycho-education on the dynamics of a maturing relationship. But this book borders on a steamy soap opera that should be placed in the adult section of a bookstore.

As a clinician who enjoys educating clients on how to better communicate in their relationships, I’m sad to say that this book seems misdirected. Not only does the title potentially offend sufferers of PTSD, it also leaves out a lot of substance.

APA Reference
Hill, T. (2016). Post-Romantic Stress Disorder: What to Do When the Honeymoon is Over. Psych Central. Retrieved on February 26, 2020, from https://psychcentralreviews.com/2016/post-romantic-stress-disorder-what-to-do-when-the-honeymoon-is-over/