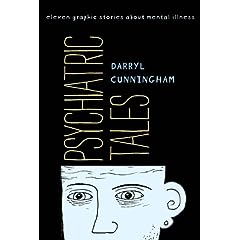 Before beginning a review of Psychiatric Tales: Eleven Graphic Stories About Mental Illness, this reviewer feels that it is necessary to disclose that it is the very first graphic novel she has ever read.  Keeping in mind, then, that this review is from the point of view of a comic novice, Psychiatic Tales was found to be entertaining, informative, creative, and a thought-provoking pleasure to peruse.

Author Darryl Cunningham, now a successful cartoonist and artist living in England, has written and illustrated an engaging account of the experience and knowledge gleaned from his years working in a psychiatric hospital, as well as his personal experience with mental illness, in a format not generally used in this manner.  In his words, Psychiatric Tales is “meant to be a stigma-busting book.  This is needed because fear and ignorance of mental illness remain widespread in society” (p. ix).

Psychiatric Tales comprises ten sections, plus a conclusion and introduction, which opens with Cunningham’s account of his decision to write the book.  He was initially doubtful that a graphic format would do justice to the subject matter, but after encountering Persepolis by Marjane Satrapi, a lauded comic strip about her Iranian childhood, he decided that drawings could be used to creatively enhance the material.

The ten main sections that follow are organized either around specific disorders, symptoms, or societal viewpoints.  The first two, Dementia and Cut, dealing with the elderly and those who self-harm respectively, show that Cunningham does not shy away from harsh depictions of the unpleasantness that can be found in psychiatric hospitals.  The following, which is not at all the worst, is an example: “Sure enough, he’d left a pretty present, in the form of a huge turd swimming in a pool of urine (p. 11).”

The third section, It Could Be You, interjects the first of series of societal issues.  It makes the unsettling point that “…the next sufferer could be you (p. 25),” so why do we put up with the stigmas and enforced isolation inflicted upon mental health patients?

Specific disorders addressed in subsequent sections include Depression, Anti-Social Personality Disorder, Bipolar, and Schizophrenia.  For the first, both the use and effects of medications as well as recognizing the symptoms are discussed.  The last three disorders are fleshed out even more.  Media sensationalism, controversy over diagnostic criteria, and examples of delusions are all included to further place these patients in a wider context.

Two more sections give information about the mentally ill in society.  The first, People With Mental Illness Enrich Our Lives, shows how genius and creativity can exist despite mental illness and giving examples of famous patients such as Winston Churchill and Judy Garland.  The second, Suicide, covers what happens to the fabric of a family and community when “the effects of suicide ripple outward (p.117) and notes that “an average of six people will be intimately affected by a [suicide] death (p.118).”

The final section before Cunningham’s personal conclusion is Blood, which explains how self-harm is by turns an addiction and coping mechanism rather than attention-seeking behavior.  He also gives a profile of what a successful recovery can look like.

Cunningham ends Psychiatric Tales with his own story, How I Lived Again, of his struggle with anxiety and depression.  He fought through with a combination of Prozac and the internet community, which encouraged him to continue with his artwork and ultimately write this book.

“However, my advice would be this: as well as taking medication and seeking support from         friends and family… look deep into yourself for the qualities you need to survive.  Your talents,       hopes, dreams, and desires, because these are the things which will save you.”

As New York magazine writer Scott Brown noted in a recent article, “Comics, despite their surface pieties… are an incredibly plastic form, a substrate for almost any sort of storytelling.”  Cunningham has found, through his chosen medium of the graphic novel, a compelling way to distill complex messages into simple one- or two-line captions.  Indeed, it may be the very simplicity of the words and the sparsely-drawn images that is so moving.  For example, in the section on depression:

Patient: “Everyone else manages to cope, but I can’t deal with the simplest thing.”

Doctor: “It’s the illness that makes you feel guilty.  You should never blame yourself for being ill.”  Darkness, p. 36

The author also includes a good combination of specific anecdotes alongside general medical information.  He’ll detail one patient’s unique set of symptoms, for example, then go on to say what the typical prognosis is and what medications and therapies have been known to help.  There are chapters in which a broader societal outlook is included as well, including often-overlooked information about how behavior norms and stereotypes/prejudices can affect the diagnosis and recovery of psychiatric patients.  The central thesis of this position is:

“A mental illness is a brain disease…there is no justification for separating out mental illness        from other brain disorders.  Yet many people still believe mental illness to be a result of failure    of character and self-discipline.  This attitude only compounds the difficulties that sufferers have to endure, ensuring banishment to the fringes of society, where loneliness and alienation can only make things worse.”

There are some organizational questions, such as why Cunningham chose to divide self-harm into two separate sections (Cut and Blood) and why the final section on his own experience is so different in tone than the rest of the content, but these are minor distractions.   The book is also not meant to be an instructional work, a comprehensive study, nor even a memoir.  It appears to encapsulate and distill its extremely broad topic into an overview that, while merely a sliver of what is out there, still manages to seem thorough.

Overall, Psychiatric Tales is a refreshing, affecting take on the world of mental illness and how it is treated, both medically and societally.  It would be ideal for those looking to place their own experience or set of interests into a broader setting.

Being A Psychotherapist In The Midst Of The Coronavirus Pandemic