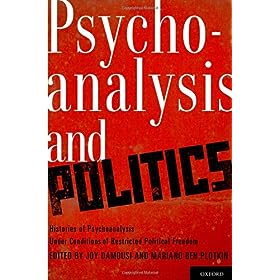 Psychoanalysis and Politics: Histories of Psychoanalysis under Conditions of Restricted Political Freedomis a collection of essays examining the complex, often paradoxical relationships between psychoanalysis and politically repressive European, Latin American and North American regimes from the 1930s to the present.

These relationships run counter to the view that a certain level of political and social freedom is a prerequisite for psychoanalysis’s adoption and growth. For instance, contributors to this book show that under the most repressive military dictatorships in Latin America, psychoanalysis flourished. Thus, most scholars recognize both the emancipatory and repressive aspects of psychoanalysis.

In their introduction, editors Joy Damousi and Mariano Ben Plotkin state, “[W]hat we see in the essays included in this volume is that under authoritarian or totalitarian regimes, psychoanalysts were often persecuted for things that had little to do with their profession and ideas.” This volume is a fascinating, challenging, academic account of the malleable forms under which psychoanalysis appears, is interpreted or is appropriated under authoritarian or totalitarian regimes.

Joy Damousi, Ph.D., professor of history in the School of Historical and Philosophical Studies at the University of Melbourne, and Mariano Ben Plotkin, Ph.D., researcher at the National Council of Scientific Research (CONICET) and professor at the Universidad Nacional de Tres de Febero, Argentina, organize contributions from scholars of history, politics and psychoanalysis. The book is divided into three sections, each preceded by its own introductions. Regimes examined include Fascist Italy, Vichy France, Spain and Hungary under Fascism and Communism, dictatorships in Brazil and Argentina in the 1960s and 1970s as well as the influence of Hoover, McCarthy and more generally, the Cold War on psychoanalysis in the United States.

As a context for the study of the flow of people, ideas and practice of psychoanalysis in repressive regimes, Damousi and Plotkin present us with a coherent mental framework in which they view their collaborated work. As noted in their introduction:

Throughout its more than century-long existence, psychoanalysis, like any other system of thought or beliefs, has been the subject of transformations, appropriations, and reinterpretation. If we consider that the history of a system of ideas is inseparable from the history of its multiple receptions, then it is impossible to define a ʻtrueʼ psychoanalysis – as it would be impossible, for instance, to define a ʻtrue Marxismʼ – as a yardstick against which all other versions of it should be measured. Although the establishment of a fairly rigid orthodoxy imposed by the International Psychoanalytical Association (IPA) standardized to some extent the practice and interpretation of psychoanalysis, local conditions introduced important nuances into the IPA standards. Moreover, the existence of dissidents within the international psychoanalytic movement has challenged the IPA-imposed orthodoxy generating alternative ones. . . . since we are not interested in defining what ʻrealʼ psychoanalysis is or has been, nor in evaluating it, but rather in considering it as a complex and evolving cultural phenomena, we consider psychoanalysis to be all practices and discourses that legitimize themselves in the system created by Freud.

The introduction provides clear definitions of authoritarian and totalitarian political regimes. Yet many of the book’s collaborators take a non-reductionistic approach in studying political situations and developments. Thus, politics is not reduced to an epiphenomena of psychic forcers nor are the dynamics of psychoanalysis seen as purely determined by the social or political situations in which they are embedded. Damousi and Plotkin offer us a lens of higher resolution, revealing details of the many fascinating lives, philosophies and backgrounds of analysts under repressive regimes, from the dissolution of the Psychoanalytic Society of Vienna on March 20, 1938, up through the present day.

Psychoanalysis and Politics: Histories of Psychoanalysis under Conditions of Restricted Political Freedom is highly recommended for all scholars interested in the relationship between politics, social movements, and the social and intellectual development of psychoanalysis.